The Hoarder and the Hobo

The choice of name for this blog was remarkably prescient, since as you probably know, I have relocated from the Portland in Oregon to its older and smaller sibling city on the coast of Maine.  This is a long-ish story but the short and publishable version is that I and my dear partner in crime J have decided to weather the vagaries of older adulthood together, a kind of “Golden Girls Redux.”  To this end, Squeaky and I packed up our Portland (OR) digs in June, sent our pared-down possessions across the country and into storage, and flew to Maine and thence a summer on J’s fabled island, about which you have a read a bit in the prior post.

Portland, Maine, is revealing itself to be an utterly delightful city. Small in size and population (around 67,000 souls), it prides itself on being and having been Maine’s premier urban center for nearly 400 years.  The architecture is stunning, due in part to several devastating fires, the streets eminently walkable, the neighborhoods charming, the restaurant scene remarkably robust for its size, the arts scene bustling, and the people warm and welcoming.  It is in many ways a “Mini Me” of the Oregon incarnation, and I feel remarkably fortunate to have the chance to be here.

My cover photograph is a sliver of one of my favorite intersections in the Old Port section of town, but for a fuller look, here’s the entire photo: 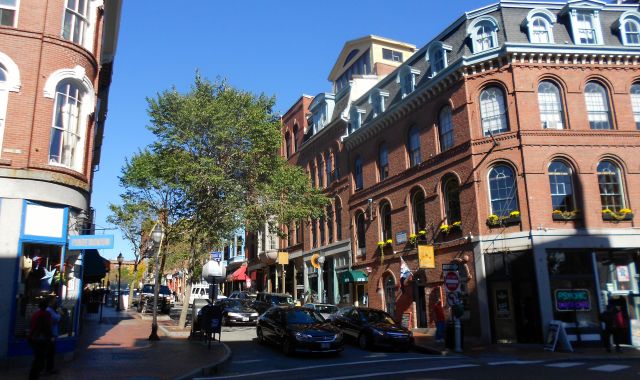 The residential sections of town are equally compelling.  Here’s an unretouched shot of one of the city’s many “double houses”:

And you thought the “ivy league” was just an expression.

When it came to house-hunting, J and I came from very different perspectives.  She had been living in a secluded suburban settlement and I had been perched in the middle of the urban jungle, such as that was in TOP (The Other Portland).  J, in her generosity, decided to try living downtown, “in Paris,” as she thinks of it, and so we found a wonderful condo that looks something like the above.  It was built in 1894 by one of the city’s premier architects, John Calvin Stevens, for a former mayor and contains many of the amenities of the era – high ceilings, three fireplaces, a curved bannister, bay windows, and stained glass.  Happily for us, a local developer also recently added the “mod cons.”

So, easy-schmeasy, you say? Piece of cake?  Ah, but now we hit a few bumps, and that is Moving In Together, and the story underlying the title of this post.  J and I, while having weathered all manner of life events together (careers, moves, marriages, travels, death of dear ones, aging, you name it) have never tried to settle down, to build a home together.  In the past, we have camped either at My Place or Her Place, always with the due respect and flexibility that required.  But now the gloves are off.  How do we create a habitation that allows us both to feel “at home”? I will have to blushingly admit that when I have tried to do this in the past, usually with male cohabitants, my experience is that men will, pretty much, leave all this bit to the fairer sex (with the exception of where the TV should go).  But with two women, both of us alpha females with strong points of view but who love each other dearly, the challenges quickly emerged.

I hope it is not TMI to share that both J and I lost parents to death or desertion at an early age.  And as we have chewed and reflected on those losses, we have learned that it has affected us in two very different ways.  J’s response was to hold onto what she had, for dear life, in the event that she might need it sooner or later, since what she really needed, her mother, was taken from her far too soon.  My response was to pare down, to travel light, to be able to pack and vanish into the night if needed, since the loss of my father meant that I could never sleep without one eye open, ready to respond in an instant to the shifting environment. Those of you who have known me for any length of time will know I move a lot, even when I don’t intend to.  (Since June of 2011, for example, I have dwelt in eight different places, not counting hotels.)

So our response is to go slowly, to allow for the bumps, the pinches, the small set-tos.  J allowed me to open the kitchen boxes one at a time, agreed to pitch or store or relocate some of the items she brought from her previous abode (our kitchen is SMALL).  I have agreed to let the move-in process take much longer and go much slower than I would have liked in the past (72 hours is my traditional unpacking window).  We are currently negotiating a process (!!) by which we will decide which pictures are worthy to be hung, before even deciding where the heck to put them.  And we both rejoice in visits by friends and family who make inspired suggestions about furniture placement or who gift us with select pieces that tie a room together.

And so it goes. We practice the arts of negotiation, of compromise, of patience and inspiration on a daily basis.  I asked J the other day how our friendship was different or had changed since I had come to live with her this past summer.  She said something to the effect that nothing was really different than it had been before, but that she understood things about me in greater depth, and I would say exactly the same for her.  We are seeing each other’s icebergs in a new way.  And by building a home, we are creating a space for those icebergs to dock gently beside one another, to find a place of acceptance and support. It is a worthy task.  Now where are those damn light bulbs?

This entry was posted in Uncategorized. Bookmark the permalink.

4 Responses to The Hoarder and the Hobo