N.B. I just noticed I am posting this entry on December 7th.  Life is full of little ironies, but that being said….

Well, after nearly wasting my first day in Berlin on the garden of earthly (retail) delights, I decided the next morning I Had To Get Serious about my pursuit of knowledge and wisdom. But where to start? From a tourist perspective, you can slice and dice the town in any number of ways – historical, political, cultural, geographic, commercial, und so weiter und so fort. Since I really enjoy the simple act of walking around a new city and seeing what presents itself to my magpie “shiny object” nature, I went for the geographic, meaning every day I picked a different section of town and tried to figure out what I could cram into a somewhat organized wanderlust until the light failed or my feet gave out or I ran out of money or all three.

Tuesday’s itinerary was somewhat decided by my host giving me a ride to his place of employ, a fitness gym in the Kreuzberg district. I strolled around the immediate neighborhood for a while – a gritty-but-interesting mix of restored buildings, Turkish markets, a 1950s-60’s vintage clothing store, hip cafes, and some serious graffiti. From there I took a fairly serious hike north to the Jewish Museum, one of the “must do’s” on my list.

One thing that I was specifically looking for on this trip was a sense of how Berlin handled, well, the whole Nazi-Jews-Holocaust thing. Since the topic had pretty well dominated the 1933-45 era there (as well as most everywhere else), I was curious to see how the issue was being framed today. This is a big subject I will speak to more when I write about the German Historical Museum, but my net impression is that the people here are being mindful, thoughtful, respectful, and inclusive on the subject. It’s good to see.

That being said, a Jewish Museum in Berlin is going to have a lot of unhappy news, since Jews have been documented in the area for about a thousand years and there were only a few epochs when things weren’t difficult for them one way or another. Murdered by the Crusaders as practice for the other infidels in Jerusalem? Check. Responsible for the Black Plague and killed by the thousands? Check. (They poisoned the wells, y’know, and that’s what did it.) But like the reliable Timex culture that they are, they took their lickings and kept on ticking. Jews made significant contributions to many areas of German development, too many to list here, and many countries around the world are now the richer for the unintended outmigration of thousands in the 1930’s. That Einstein guy, for one.

Equally important to the experience of the museum is its design, which is downright mind-boggling. The architect Daniel Libeskind distinctly intended the layout to create a significant emotional experience for the visitor, and so it does. The bottom floor has a series of dark hallways that convey the uncertainty and depression that accompanied both the exile of those fortunate enough to leave, and of course the tragedy of those who could not. There is a “Tower of Void” in which one stands, inside the building but unheated and exposed to the elements by high open windows, and senses the despair and hopelessness of what many experienced. Small spaces throughout the museum are left intentionally empty to signify the loss of that segment of the community in all our cities and societies. It is very very poignant. Here’s a picture of an installation by Menashe Kadishman, “Fallen Leaves,” that that reflects that idea as “over 10,000 open-mouthed faces coarsely cut from heavy, circular iron plates cover the floor.”

And yet…in celebration of continuity, the upper floors are alive, buoyant, interactive, downright fun. Classes of children sit in circles with teachers, exploring one aspect of history or another. There’s a display of a robot rabbi that is writing a copy of the Torah under a video of a human rabbi doing the same thing with a quill and ink. People are encouraged to write their wishes on paper pomegranates and hang them on a tree, sharing our collective hopes for a better future. There are fascinating videos of the Berlin of 1929, people going about their summer activities without a care in the world.

But then, in an absurdist motiv that is hidden all around the city, there’s the special exhibit about circumcision, called, appropriate enough, “Snip it.” I understand profound culture heritage and tradition, blah, blah, but even I could not bring myself to get too close, as it were, to this particular offering, and I took a pass on that wing. I’ll leave you with a pretty amusing advertisement:

From the museum I walked north along Frederichstrasse, the fastest route for me to get to Checkpoint Charlie, a classic “must do,” particularly this year, the 25th anniversary of the demise of The Wall. If youve been there, or if you remember the pictures from the ugly days of division, you might have a picture in your mind of what it used to look like – wire, walls, soldiers, scary stuff.  Now, I have to say that that image has changed, for the better of course, but it’s a little anticlimactic, in a good way. Here you go:

Note the ironies, almost too many to count. The McDonalds sign – triumph of capitalism. The Einstein Coffee – triumph of a Jewish company over both the Nazis and the godless commies. The Christmas tree – triumph over the godless commies redux. And finally the indignity of the US Marines collecting Toys for Tots – the triumph of the nonprofit charitable world over the centrally planned economy. I just had a moment here, and had to take a deep breath.

Then I walked forward into what had been East Berlin, and I swear to goodness you can’t tell where the Wall was. It’s just a normal street, a normal sidewalk, a normal bustling day. I missed the celebratory balloons that had been here for the formal celebration, but in some ways, this is even better. You just can’t tell.  The Wall is still very much extant in other places around the city, and many museums even have bits and pieces available for sale, but in terms of this place, so significant for so long in the lives of so many, all that remains is a little white shack.

The checkpoint stands on Frederichstrasse, traditionally a famous commercial district in Berlin and now quickly regaining its mojo in that department.  Among the offerings is the French department store Gallerie Lafayette, doing its Gallic best to compete with KaDeWe and decked out in its best bib and tucker for the holidays: 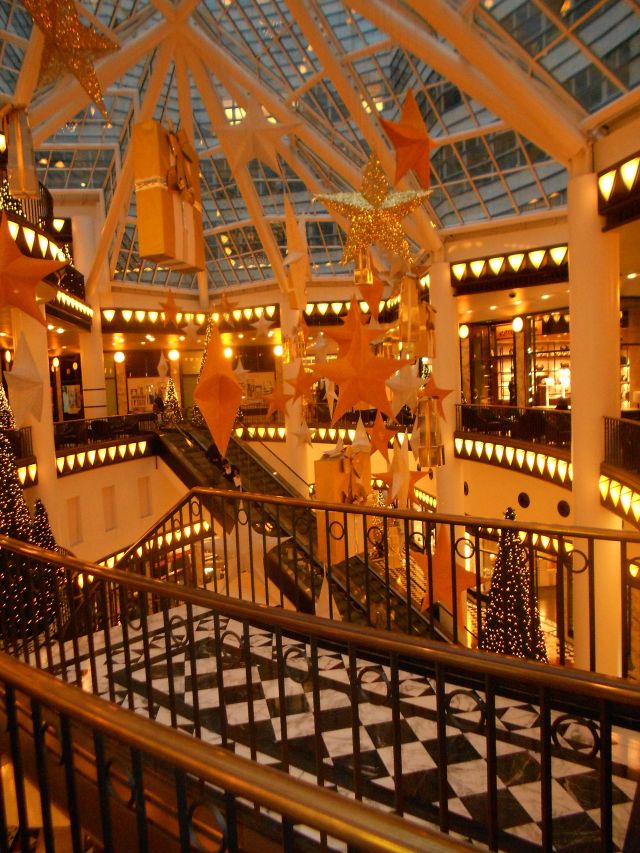 Onward to Unter den Linden, the classic boulevard that defines the center of the traditional capital, and a pilgrimage down that to the Brandenburg Gate, long a symbol of the city and now triumphantly displayed on walls and signs all over town. “It looks much smaller, now,” one lifelong Berliner confided to me. “When everything around it had been bombed, it looked much bigger.” It still looks pretty damn lovely to me.

I was equally enchanted by the Fassbender& Rausch Chocolate version:

Well, at this point I took a little look at my guidebook and realized I had walked right by one of the places I had really wanted to see that day, and it required a bit of a walk-back, but there was still light and I hadn’t had my Christmas Market for the day. So off I headed to the Gendarmenmarkt.  Guidebooks call this “the most beautiful square in Berlin,” and that’s the God’s honest truth. On Tuesday last, bedecked for the holidays, it was truly a sight to behold. Let’s see – Baroque cathedrals, hot red wine and chocolate. Is there anything not to love?

On that note, I’ll leave you until the next time.  I have one more day to post, and I’ll try to have that up soon.

This entry was posted in Berlin, Germany, Uncategorized and tagged Berlin. Bookmark the permalink.