“Liminal,” according to the online Free Dictionary, is “intermediate between two states, conditions, or regions; transitional or indeterminate.” This is a perfect reflection for me of the lovely little town of Lublin in southeastern Poland. Over its history it has been many things. In the 11th and 12th centuries, “it was a target of attacks by Tatars,  Ruthenes, Yotvingians and Lithuanians.”  In the second half of the 16th century, one of the most important yeshivas (Orthodox Jewish college or seminary) in Europe was established, “leading the city to be called the ‘Jewish Oxford’.” It belonged to Russia after the 18th century partition and then hosted the first independent Polish government after the First World War. And finally it became the headquarters for Operation Reinhardt, the main German effort to exterminate the Jews in occupied Poland, and the nearby site of the Majdanek concentration and death camp.

My visit to Lublin, not yet aware of all of the above, was occasioned by the fact of Poor Trip Planning. I had booked myself in Krakow until the 7th of March and had reservations in Warsaw starting the 8th of March and suddenly realized I had a night of No Housing Whatsover on the night of the 7th. I looked at the Polskibus schedule and realized it was a long trip from Krakow to Warsaw and that I should probably break it up, so looked around for an interesting spot. I learned that Lublin had a beautiful medieval market square (a theme of this trip, you’re beginning to see), relatively unscathed by World War II, and that there was a concentration camp nearby – another goal of mine – that was less “touristy” than the one near Krakow. So off I went.

Here’s a shot of the main gate to the medieval city: 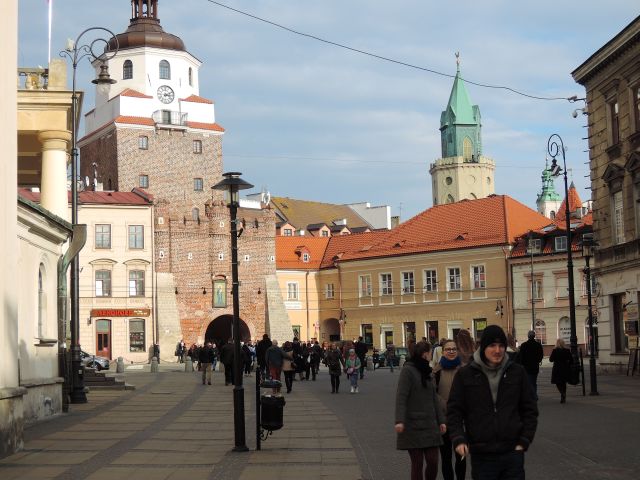 Stroll through that brick arch, as many folks do on the evening corso, and the old city opens before you:

You just walked through #4

And here’s what you see…

…and into the square:

Always somewhere to whet your whistle 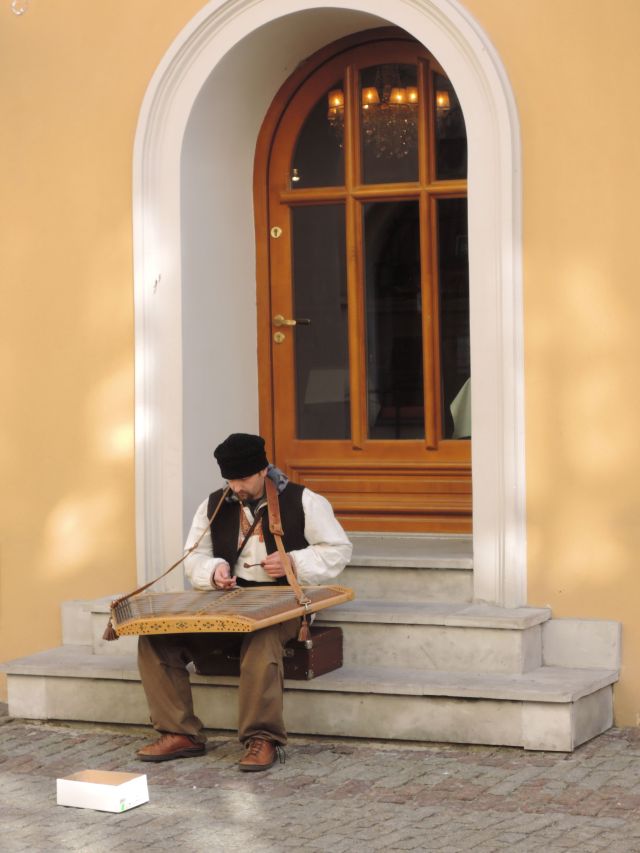 Zither to my ears

Here’s something I had trouble deciphering…what the heck was Hans Christian Andersen doing….in Lublin? 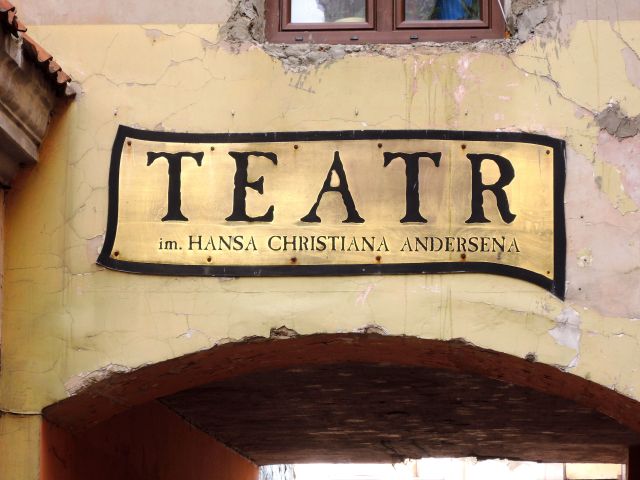 Wiki tells me that “the Hans Christian Andersen Theatre in Lublin has staged H.C. Andersen performances since 1954 and is still going strong,” but not why, precisely. Me thinks that Andersen’s characters have not had it easy, and neither has Poland, but that’s just idle peculation.

A turn around a corner shows this view which…

…begins to address liminality. The Jewish Virtual Library tells us, as I suggested earlier, that “Lublin once served as one the most important centers of Jewish life, commerce, culture and scholarship in Europe. It had the world’s largest Talmudic school, Yeshybot. Lublin was also well known for its fairs and market days. Little remains today of its past splendor.” Is this a picture of  a Jewish couple or a Christian one? Why the remembrance at all in that window, if not to commemorate….something?  And just to the left of the church you see there (dark arch), the post-communion book sale had a little something for everyone:

Rather big and bold of them, I’d say, Abraham Heschel with the priests.  Sadly, as in so many places in Poland, “Very little remains of the former Jewish quarter of Lublin. There is a monument to the victims of the Holocaust in the square between ul Rady Delegatow and ul. Hanki Sawickiej. One small synagogue remains on the upper floor of the building on ul. Lubartowska 8/10…Today, there are only 20 individuals associated with the Jewish community of Lublin and all of them over the age of 55.”

Here is a shot of the gate that the Jews (when they were roughly half the town’s population) had to pass through in order to reach the market square from their neighborhood:

…and once one walks through it, here’s what one one sees of the remainder of the Jewish quarter. Yup, just a park.

One must look carefully to see signs of Jewish life in Lublin. Here is a restaurant (see the markings on the door, and note my photographic self on the right):

Back closer to my hotel, I saw the following words written on a building. I wish I knew what they said:

…and as I am trying to understand and reconcile all of this in my head at the end of the day, I stumble across the following demonstration on the steps of City Hall on this past Sunday, International Women’s Day. It’s a group from a conservative party in Poland (don’t know translation of the name) that wants a “return to traditional family life, women at home, fulfilling their natural destiny, raising children. Oh, and we don’t want any of those Muslims, either.” Sigh.

So, I hope you can see and feel the spaces that I saw – what was, what is, what isn’t. There’s been a lot of that in this country, and it continues to Warsaw, where the emptiness is not even that pretty. “The quality of ambiguity or disorientation,” indeed. Stay tuned.

This entry was posted in Poland, Uncategorized and tagged Jewish Poland, Lublin. Bookmark the permalink.