A trip to Yuzawa

Well, things are going to get a little out of chronological sequence, but I hope you don’t mind. Yesterday two colleagues and I decided to go day-tripping to the nearby alpine village of Yuzawa, and we had a ball poking around town. Known for its tremendous snowfall in the winter, this hamlet and its neighbors throughout the mountains are seasonally packed with folks skiing and visiting the hot spring baths, known as onsen.

Skiing in Japan? How the heck did that come about? According to Wiki, “In 1902 the Norwegian consul in Kobe, Peter Ottesen, imported ski equipment and introduced skiing to the Japanese, motivated by the death of Japanese soldiers during snow storms.” Who knew? Like golf and baseball, skiing took off like a house afire in Japan, and is now a very widespread winter sport, hence the popularity of this village and other places like Nagano, site of the 1998 Winter Olympics, not far away.

This is also the location made famous by Nobel Prize short story and novelist Yasunari Kawabata’s magnum opus, “The Snow Country,” the love story of an urban dilettante writer from Tokyo and a local onsen geisha. (You just know these things aren’t going to end well.) It was Japan’s first Nobel Prize for literature (1968) and he is still widely regarded as one of the country’s best known authors.

But being that we were visiting in July, we were spared all the harsh winter weather to say nothing of the melancholy Japanese angst. Instead, the moment we left the train station (more about that in a moment) we were greeted with a helpful sign of all Yuzawa had to offer:

Lots to see and do

You can see in the photo above one of my main beefs about Japan, and that is the narrowness of sidewalks. The ones shown here are actually relatively good size. On the plus side, the roads are narrow, the cars are narrow, and the speed limits are very low. Just be sure you remember it’s a right-hand drive country, so LOOK RIGHT (like in England) when you cross the street.

Not far along, we saw the turnoff for the waterfalls, and on the standard hot afternoon, that sounded like a seriously cool idea, so up we went. 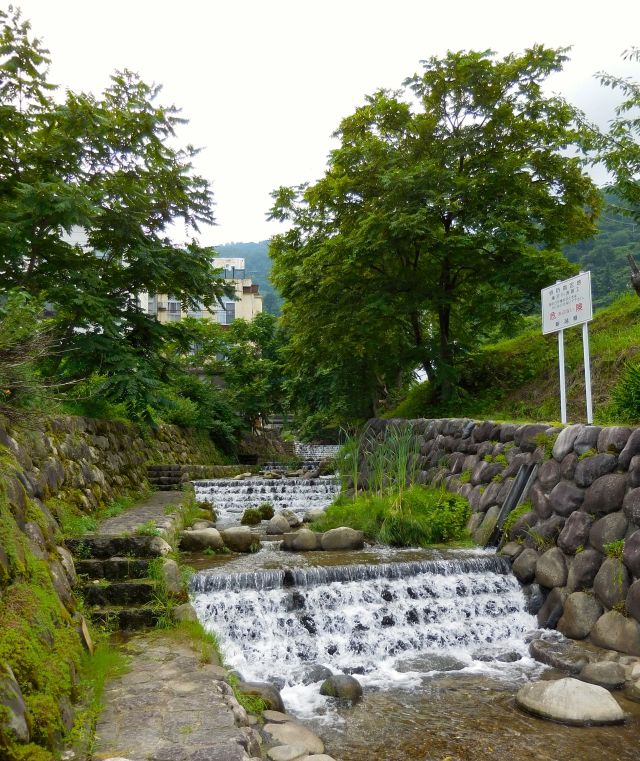 Steps and stones didn’t break my bones this day

As in many hydro-environments, this mountain stream has been completed reconfigured in service of The Greater Good. Nonetheless, it was a lovely meandering path under shady trees that revealed a beautiful blue butterfly (wouldn’t stand still to be photographed) and this lovely wild mountain lily:

As in many cases, there was some construction near the top (see blue tarp on upper left below) so I don’t think we saw the actual waterfall, but here’s our apex: 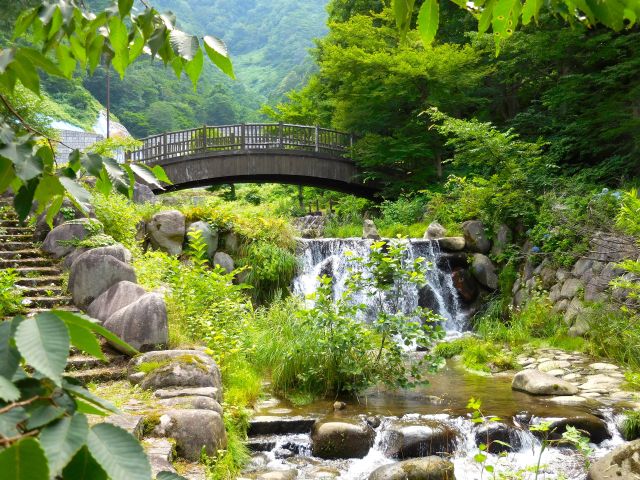 …so about this point we headed down. Near the bottom, my colleague K had the truly outstanding idea of using the stream to let off steam, as it were. Here’s a happy camper:

Inspired by her daring we soon all followed suit:

Tootsies recovered, we meandered nearby to the Yuzawa Town History Museum. Well worth the 500 yen entry fee (about four bucks), this building held a small but fascinating collection of archeological relics found in the vicinity (some pottery and arrowheads dating back millenia) as well as a some beautifully presented artifacts of how life was lived in the mountains before the advent of modernity, grouped by season and the tools used in each. There was also a small exhibit honoring the famous novel and its author, including the kimonos he wore, his Tiffany travel clock, the Chinese cups for his green tea, and most interesting to me, a photo of the actual pens he used while writing, several of which were my favorite Montblancs.

…some beautiful everyday objects, including a pen and ink…

…the “second largest find of antique coins in Japan, excavated from the Ishishiro area…”

What’s inflation done to these?

…and finally, a magnificent saddle, too large, it would appear, for a standard horse: 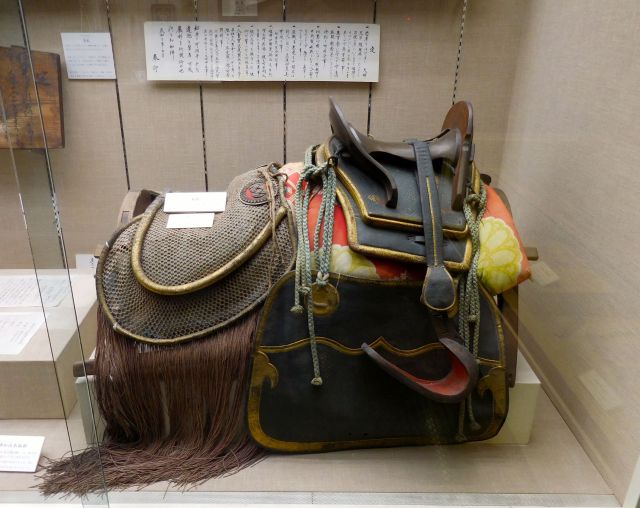 Perhaps sized for the samuri

Sated, for the moment, with local culture, we decided to head back to the train station for some refreshment and, that favorite of all cultural activities, shopping. But before we made it there, we stopped to appreciate a civic offering which probably makes more sense in January than July, the outdoor public hot foot bath, of which there are several on this main street, complete with all the requisite warnings and guidance:

The Yuzawa train station (technically called the Echigo-Yuzawa station), due to the huge numbers of people who come in the winter, is huge and quite entertaining all by itself. Here’s a shot of the main browsing and shopping areas:

All the Snow Country kitsch you could possibly want

We were particularly enchanted by the liquor section of the mall, bursting with every known size, shape, and flavor of sake, featuring a sake bath, of all things, but humorously decorated with plaster casts of two who manage to overindulge with this most Japanese of refreshments:

Back we went on the local train to Urasa, satisfied culture vultures. Thanks, K&T, for a wonderful day.

This entry was posted in Travel - Japan and tagged Snow Country, Yuzawa. Bookmark the permalink.

3 Responses to A trip to Yuzawa