A temple in Urasa and other mysteries

I keep threatening to write a blog post comparing my time in Japan with my time in Georgia, but so far that hasn’t managed to happen. Today, though, I’m going to focus on some of the elements that keeps making that post a possibility, and illustrate them with some pictures of what has to be one of the most beautiful and fascinating things I have seen since I arrived here, and that is the Fukoji Temple in Urasa, also known as a Bushamon-do, meaning it belongs to a particular sect of Buddhism.

But first, a little explanation is in order. “Urasa” is the name of the train station closest to my university. It USED to be the name of the village that surrounds the station (a separate post to follow about that), but between about 1999 and 2010, many of the little villages all over Japan were administratively “dissolved” and turned into larger municipalities. Urasa became part of greater Minamiuonuma (which itself used to be two places, Minami and Uonuma) but that doesn’t change the fact that physically the village ‘formerly known as Urasa’ still has only one sweet little main street that rolls up the sidewalks at about 5:00 pm and settles in for a quiet evening of soba noodles and old samurai movies. The picture above is taken from about the center of that thoroughfare.

On a separate but slightly related note, what’s truly odd is that the bullet train, the Shinkansen from Tokyo to Niigata, one the most expensive train lines ever built in the entire world (six billion yen per kilometer, according to The Rough Guide to Japan), actually *stops* in sleepy little Urasa, instead of in either of the significantly larger also-former-villages on either side of us by a few kilometers. This is due to the fact that a former prime minister and long-time back-room deal maker and construction pork-barrel king named Kakuei Tanaka (nicknamed “The Shadow Shogun” for the amount of power he wielded in government) was from this area and wanted to “give back” to the community, if the signs at the base of his enormous statue next to the train station are any indication.

Okay, so we’ve got tiny non-village that contains very little besides a huge Shinkansen station (to the never-ending relief and delight of IUJ), an ancient and beautiful temple complex, and an “international university.” What’s next? Some weird cultural festival? You betcha, but I’m saving that bit for later. But what the heck does this all have to do with Georgia? The similarity is that I seem to keep finding myself in places that are filled with mysterious histories and places and buildings and people and festivals and *none of it is ever very clearly explained to me.* I have to crawl all over the internet, ask a million questions,  stumble around in the conceptual dark, all the while feeling like a deaf and dumb cultural anthropologist who can’t speak the language and can’t read the signs. (I always did love a puzzle.)

So, as you’re walking down the main drag in Urasa, if you’re not careful, you walk right by the entrance to the temple, the first picture above. If you do start to walk up the stone path, you are cautioned not to walk on the bricks in the center of the walkway, because *those are the ones used by the gods.* (Always good to know; don’t want to stir up trouble when you don’t have to.) The odd candle thing on the right is the symbol that this is the location of the most significant annual event in town, held every March, the Naked Man Festival. Ya just can’t make this stuff up.

Here’s a better shot of the temple entrance…

Proud to be Japanese

But even the origins of the temple are complicated and fascinating. “It is said that in 807 Sakanoue no Tamuramaro visited this land and for the sake of the peace of the country, he founded the temple of Fukoji.” Ah, the ‘peace of the country.’ A lovely Japanese euphemism, if ever there were one. A little web-crawling suggests that this occurred during the period when the presiding emperor and his minions were trying to consolidate their hold on the island of Honshu and were thereby in the process of pushing back and subduing (conquering? exterminating?) the other tribes that used to live on the desired property. So, a little historical transliteration and we have your basic garden variety Japanese territorial expansion and colonialism, and as we know from American history, a place of worship is often a sign that the invaders are in for the long haul.

Even more interesting is the that the warrior in question, General Sakonoue no Tamuramaro, is known as “The Black Shogun.” While still highly controversial among historians, there is some evidence to suggest that there were people of African heritage all over East Asia during this and earlier periods, and that this particular man is held up as being one of the most famous of them all in Japanese history. (To be clear, this wasn’t included in my tour; I had to find this bit out for myself. For more details see http://www.onyxtruth.com/2014/02/16/afro-samurai/)

Entering the temple compound, one sees this…

I was pretty surprised when I laid eyes on this sight. Urasa is nothing much in particular in terms of visual appeal; this complex suggests that there may have been an older and more impressive community at some point in time. There are, a short ways from here which I have not yet seen, ruins of a castle which was in use as late as 1578. I don’t have more information about it, so add it to the mystery pile.

As you may recall from the earlier post that had pictures of the shrine, they are from the Shinto tradition and temples from the Buddhist. Shrines tend to be out in nature, have tori gates, reflect the regional gods, and prayers there tend to be fairly ritualized. Temples tend to be in more “metropolitan” areas and are the places that people tend to come for more day-to-day concerns. (Please don’t hold me to this; there’s probably a good you-tube that can explain it much better.) In any event, this is a temple, and there was even a small gift shop.

Here’s a close-up of one of the temple carvings, which deserve a day and a blog all to themselves. This looks very Chinese to me, maybe even Tibetan.

And here is an ancient spring on the temple grounds. This whole area is filled with outpourings of water, some cold for drinking, some hot for bathing. No wonder it’s one of the rice growing capitals of the country.

Cleanliness is next to godliness

This very spring, transmuted by the chill of winter, becomes a immersion spot for the Urasa Naked Man Festival. Called in Japanese “Hadaka Matsuri,” these festivals, of which there are many, are always held in late February or early March and seek the blessings of a bountiful harvest in the coming year.

Here’s a picture of a picture of the self-same spring, this time in the dead of winter with some wild and crazy guys praying, apparently, for prosperity and fertility. This festival dates from about the time of the establishment of the temple, so is around 1200 years old.

In short, the gents,well fortified with sake, of course, dress up in not much other than loin cloths and straw zori slippers (keep in mind the temps are well below zero at this time of the year) and are led down the main street by torch bearers carrying huge candles: 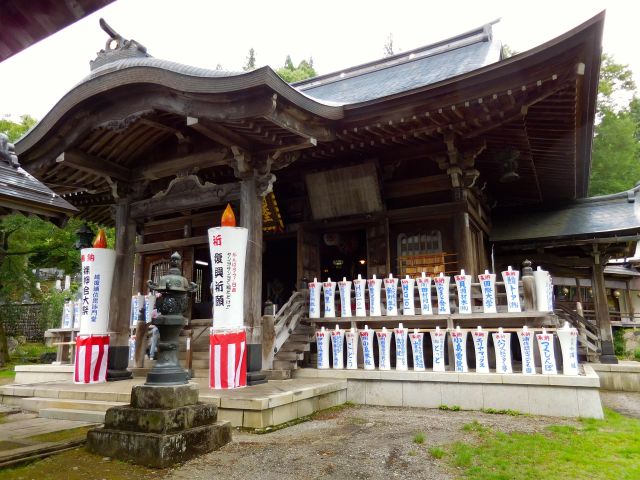 Once in the temple grounds, first they dip in the spring as seen in the shot above, and then they all gather in the main hall seen above to basically push each other around, fighting amongst themselves to get through to the inner sanctum and receive a special blessing from the “good luck keeper.” One of the full-time faculty at the IUJ, actually the man who interviewed me in Toronto, had gone through this ritual and it apparently was quite rough. (No wonder he had a nasty head cold when we met up.)

I must admit, it’s hard for me to picture this neck of the woods in nine feet of snow, freezing cold, and for one brief moment, filled with drunken nearly-naked Japanese men giving it their all under to ensure a good harvest. Almost enough to get me back back here in February. Almost.

So there you have it – my latest discoveries in my micro-travels around rural Japan. I hope to have another blog or two out over the coming long weekend, one on Urasa (it will be short) and a longer one about the nearby city of Nagaoka which I plan to visit tomorrow. Who knows what strange and wonderful things I might discover there? Stay tuned.