Vilnius is “quirky,” said the NYT…

…and of course that’s exactly the kind of thing to get my juices flowing. Ostensibly, the purpose of this trip to Lithuania is (ahem) research on the memoir I’m writing about Uncle Bob, but that photo will probably take 15 minutes and the rest of the week is simply because, like many other places, the Baltic nations are “edge zones” and therefore magnetically attractive to me. Having seen Poland in March of 2015, I am very curious to see similarities and differences in history, culture, and of course, responses to the staggering catastrophe that was the 20th century for the people of this region.

My first day in any given new city is what I call the “death-march acculturation walk.” The goals are 1.) to spend time in the sunlight to reset my internal clock; 2.) to get a general sense of what’s what and where; and 3.) to take the temperature of the town, poking my nose in anything that catches my fancy. Once these goals are accomplished, I usually set a more organized agenda for the rest of the visit, and today was no exception.

Vilnius is complicated, to be sure. Not as old as some places in Europe, it began after the Christian conversion of the country in the later Middle Ages and seems to me to be covered in churches, many in a stunning Baroque style. The central city itself is very low and dense – in many ways it resembles a village rather than a metropolis, as noted by the NYT in the link at the end of this post. It became a major center of Jewish life and learning for over 500 years as well, often referred to as the “Jerusalem of the North.” Politically it has ping-ponged back and forth between being in Lithuania, Russia, Poland, and the Soviet Union before the country itself finally wrestled back its independence in September of 1991.

Here’s a shot of one of those Baroque beauties. I have no idea which one this is, since the little tourist map lists 30 of them, but it gives you an idea:

Since Lithuania is so far north and today was so clear, you can see the long shadows even at noon when this shot was taken.

Although the Old Town is a UNESCO World Heritage site, and deservedly so, there is, like many post-Soviet urban settings, a lot of variation in the architecture. Beautifully preserved and maintained sites, like the one above, may be cheek-to-jowl with considerably less scenic venues. There is a lot of renovation in progress, thankfully, but there are also a lot of places that look a bit run down. I’m told (again, the NYT) that things have changed considerably recently (entrance to the EU probably had a lot of to with this), but there more work in store, I hope. Here’s a shot of a less, er, classic facade:

And here’s a motif I really didn’t expect to see here – the Tlingits come to the Baltics. Go figger. 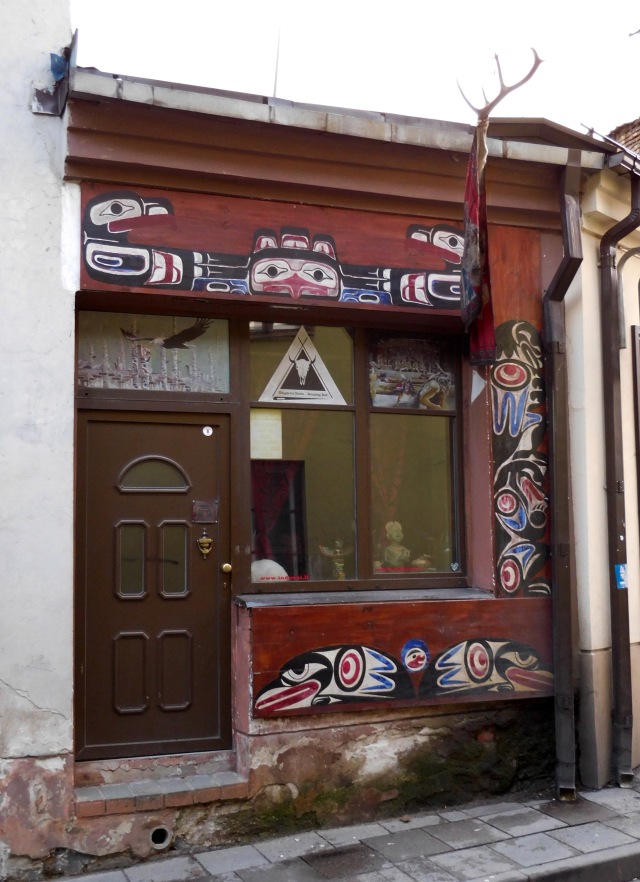 With no real plan, I truly rambled today – a bookstore here, a cafe there, the Museum of Genocide Victims, and the Amber Museum before stopping for a bit of a nosh at one of the local brew pubs.

I didn’t take photos in the Museum of Genocide Victims, but let me tell you it was quite the experience. The building was the former Gestapo HQ during WWII and was then turned over to Putin’s old KGB friends for the post-war reign of terror that was inflicted on the locals. The basement is gripping for its being maintained in near-perfect stasis from the handover of the former owners in 1991 and one gets a close look at surveillance apparatus and techniques, holding cells, interrogation cells, a special sound-proof room for torture, and the space used for executions. It just wasn’t pretty.

Moving along, a little natural beauty as a pick-me-up. The Amber Museum showcases some fascinating information and displays in the basement and then sports a lovely jewelry shop on the ground floor, complete with a friendly staff member who treated me to amber liquor, basically moonshine with bits of resin floating around in it. Baltic amber, found mostly on the coast of Russian Kaliningrad, is composed to two types: the inner wood derivative which is more opaque, and the type derived from the outer layers of the tree, the transparent material shown below. It’s most precious with trapped insects.

The German word is Bernstein, for “burning wood.”

On the same street, here is a little courtyard where Nobel-prize winning Polish poet (and diplomat and professor) Czeslaw Milosz wrote some of his work. He was born nearby when the region was Poland in 1911. You can see some of the typical two-and-three story architecture found around the city as well. 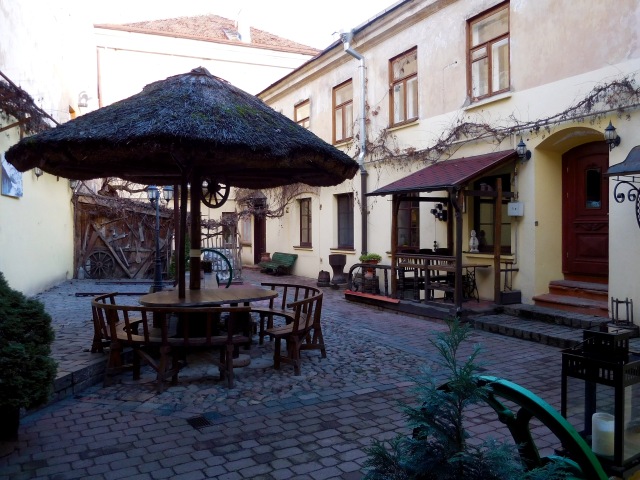 Watch for the muse

On the way back to my hotel, just before a late lunch, I ducked into a modern mall to warm my hands and toes. Along with the usual retail suspects, I was amused to spot the following sign for a product that I never knew required regional accommodation:

About the time I was going to keel over, I visited the Jewish Cultural Center to plan my trip to those sites in the coming days. I asked about a good place for lunch and was directed to Snekutis, one outpost of the local brewery. The beer and soup were delicious but the ambiance was a bit on the grunge side, so I didn’t make it a long visit. I did notice, though, a list of some of the local delicacies available. This may go a long way to explain why there are not Lithuanian restaurants in every city. I could have chosen:

(You know those extra five pounds I was planning to gain on this trip? Just sayin’, they may have to wait until Berlin.)

For a great short video and article about Vilnius, click on this link from the New York Times published in July of 2015. You’ll get a sense of the language as well.

Stay tuned for more adventures from the 56th latitude.

This entry was posted in Lithuania, Uncategorized and tagged Vilnius. Bookmark the permalink.