Although there’s more to write about Budapest (and I certainly hope to do so), today I said “Farewell” to the city of paprika and langos and started my journey up into the Czech Republic. The train station from which I left, Budapest Keleti pályaudva, looked much the same when I first traveled through in 1992:

What’s changed, though, is the ease of ticketing. Make a reservation and pay online; bring a ten-digit code to the station, go to the yellow machine, punch in the number, and presto! Out pops the ticket with the train number, the car number, and the seat number. Easy-peasy. Hop on, and off you go.

As one leaves Budapest on a train, one travels through some sad and tired districts, a fairly wide-spread post-EU hangover being something I haven’t mentioned yet. Much as I love it, Hungary feels to me… resigned, weary, cautious, but with an eerie underlying tension that is palpable. Even the graffiti, it seems, is half-hearted. People’s faces are tight and closed; aside from the professionally hospitable hotel employees, no one smiles.  Piles of trash are strewn along the railroad line; one can see people living in makeshift tarp tents, standing by small fires. And these aren’t refugees – in fact, I didn’t see a single refugee in Hungary (those borders are tightly sealed). No, these were local down-and-outers, refugees from a life which so far, at least, has  failed to deliver.

Thankfully, for me, at least, as we crossed into Slovakia (no passport control) and thence to Bratislava, things looked to be improving. Farms were larger and neater; buildings were more consistently painted; signs were illuminated and more often translated into English. I visited Slovakia’s capital Bratislava twice in the early 1990s with my good friend and colleague JM, spending two weeks each time. Although I didn’t get off to check the progress in person, it was fun to speed through on the train and see the hustle-bustle. Brat is a happening place, it seems – cranes everywhere, lots of nice cars, people walking briskly. Well done.

After another seamless border crossing – I at least expected a sign, but didn’t see one – I arrived in Brno (Ber-NO), the capital of Moravia, where I switched from the train to the bus. Europe, for the most part, is so damn well organized. I was anxious about how managed this switch – duh – you simply * walk across the street* from the train station to the bus station. Didn’t really need that hour and a half I had programmed in, but spent it sitting in the lobby of the Hotel Grand, admiring the view:

Brno is the Czech Republic’s second largest city and a big commercial and educational center. I saw scads of college-aged people walking around the not-so-attractive but still lively streets. When it was time to find my bus, it was well-organized yet again: lots of monitors with times and destinations; everyone queuing up politely, and, showing only another ten-digit code written on a piece of paper (which thankfully corresponded to one on their list), I was ushered onto a Student Agency Bus. If you remember last year’s Polsibus adventures, this is much the same:

Not much in the way of sights to mention in town, but I did mange to catch a glimpse of the Cathedral of Saints Peter and Paul as we rolled towards the highway, one of the “must-sees” in the region for its amazing Baroque interior (which clearly I missed). Still, those spires, reaching roughly 250 feet into the sky, are pretty impressive: 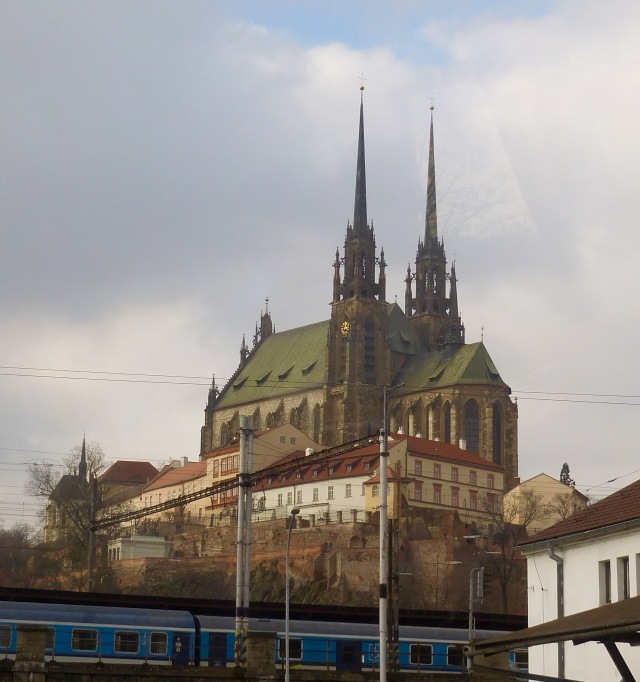 Reach for the sky

The bus trip was peaceful and easy. We traveled through the rolling countryside of southern Moravia, past pastures covered in late winter snow and through little villages with tidy stucco houses. I amused myself by trying to finished the ‘hard’ Suduku puzzles I had stolen from my Turkish in-flight magazine. But then the bus movie changed and up popped Ocean’s Eleven! In English, no less! Let me tell you, I felt some serious cultural schizophrenia watching George, Brad & Co. in Vegas trying to bust the vault in the Belagio while looking out the window at muddy Czech cows.  (That George Clooney, though. My, isn’t he fine.)

Another change of transport, this one in Ceske Budejovice, yes, the home of Budweiser. Alas, I wasn’t there long enough for the brewery tour, more’s the pity, just hopped on yet another yellow bus for the half hour drive to Cesky Krumlov, my intended destination. Walked up from the bus station, over a rise, down into the town to the main square, turned right to my hotel, and BAM! saw this:

Pinch me yet again

Holy crap, it appears my inner princess has found her castle. This is the fairy tale town we all wanted to live in when we were eight. I’m looking forward to heading out to do some serious exploring and shooting, and I’ll be sure to share my findings with you asap. More soon.

This entry was posted in Travel - train. Bookmark the permalink.

1 Response to Trains and buses