Dresden was a last-minute addition to my trip itinerary based on the unavailability of friends in Munich during this time period. But there were and are many reasons why I’ve wanted to visit, starting with having read Vonnegut’s Slaughterhouse Five in college (he was a POW here) to its having been a Bob spot (and I’m bagging those one by one) to its rebuilding both under the GDR regime as well as post-unification to….well, its current unenviable reputation as a center for rightist protests in Germany. I saw a little of all these things during my few days here, but feel, as I so often do, that more questions were raised than answered; that this is a place of many stories and perspectives.

The post-it background is that this city is the capital of Saxony, one of current Germany’s sixteen states, but it is not to be confused with Old Saxony, the part of the world where the Saxons (as in Anglo-Saxons) come from, further to the northeast near Denmark. Dresden and environs have, however, played an important role in German history as well as that of the Holy Roman Empire since its founding around 1200 CE and was known for centuries as a “Jewel Box” for its beautiful Baroque and Rococo architecture. Industrially it was famous for camera and cigarette factories, although Dresden china is a relatively new invention. The true glory of German porcelain comes from Meissen, some ten or twelve kilometers away down the Elbe River.

Dresden was also the site of a major Allied bombing raid on the nights of February 13th and 14th in 1945, as Vonnegut writes and history shows. First British and then American bombers dropped an astonishing amount of explosive and incendiary material on the city center, creating a firestorm that destroyed just about any standing object in the target area which included most if not all of those Baroque jewels mentioned above. For many years following the war, the main squares remained cleared of rubble but undeveloped. My tour guide said yesterday that “there was no Marshall Plan for the GDR, and we had to pay reparations to the Soviet Union.” Life went on, but mostly in newly constructed residential and commercial blocks.

So here’s the view I’m staring from the 8th floor of the Pullman Hotel at as I write these words:

This is the newly reconstructed Praeger Strasse, the main shopping street in town. Before the war the buildings were much older, of course, and set much more closely together. There is a sepia print of those early days in the hotel elevator, used as advertising for the restaurant here, nostalgically named “Le Boulevard.” But that’s all that’s left. Past the red lights in the upper center of the picture, Praeger Strasse heads up into the historic part of town, the Old and New Squares. Here’s a shot from near the Tourist Office, giving you an idea of how the old and new of Dresden are often in one shot: 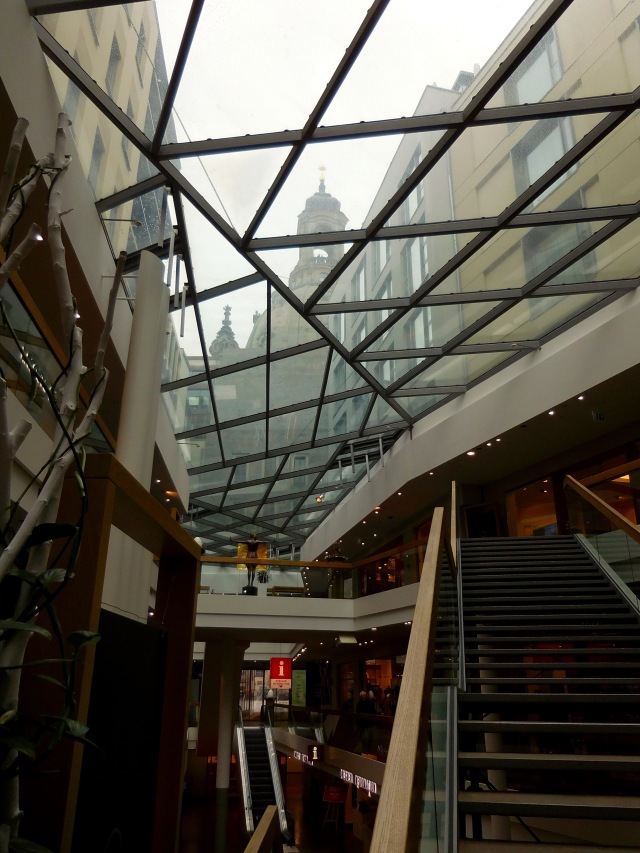 Praying first to God and then to Commerce

Central to both the original and current urban planning as well as the soul of the city is the Frauenkirche Dresden – the Lutheran Church of Our Lady. While it wasn’t specifically bombed in 1945, the combined heat of the blast basically drove the temperature of the building up to a point where it imploded upon itself. The rubble lay untouched for 50 years as a stern anti-war reminder by the GDR; only after reunification in 1994 did rebuilding begin, using as many original stones as possible, painstakingly placed back into order. The work was finally completed in 2005. 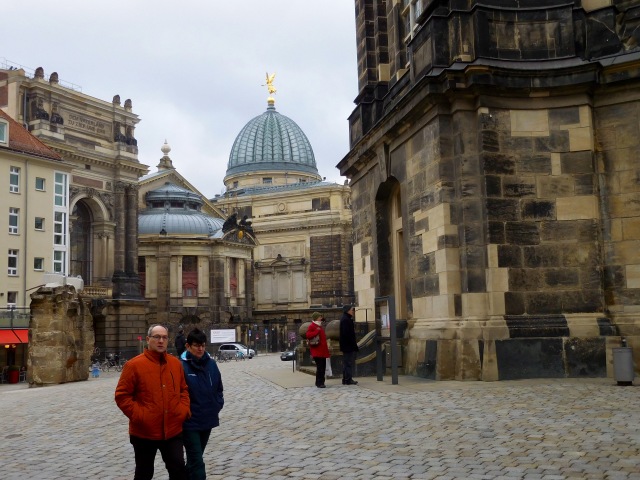 Black stones are back home again; white are replacement pieces

Nearby the Frauenkirche, new blocks of buildings *created to look nearly identical to those destroyed* are going up near newer Soviet-style pieces from the former regime. It must be very odd for long-term residents to see not only building happening on formerly deserted fields but then to see a “Baroque Disneyland” take place, as my tour guide said, attempting to regain former glory. It’s a discussion any destroyed city must have to have – what is meaningful to a sense of civic identity? How does one create space that respects the past but acknowledges the future?

Interestingly enough, in the middle of these redevelopment discussions, archeological ruins turned up that no one had suspected at all – buried under the rubble – so now efforts are afoot to uncover and document as much as possible before building whatever is planned to go in its place.  The Frauenkirche is in the background:

The Frauenkirche comes into view yet again this week for hosting the first installation of “The Wolves Are Back” by the artist Rainer Opolka, civic art protesting, well, protesters:

Reading in dw.com, we learn “Opolka says the 66 metal statues of wolves that he’s created serve as a symbol for the “hate, arsons, neo-Nazis, angry Pegida followers and members of the AfD, who want to shoot refugees.”

“Measuring nearly two meters each, the statues were installed on Dresden’s central Neumarkt square, just in front of the city’s historical Church of Our Lady, earlier this week. Dresden is the capital of the German state of Saxony, a region which has increasingly seen racially motivated violence.”

In the light of day, the wolves, while still ominous, appear in my picture to be engendering the kind of reflection and conversation the artist intended:

“The biggest enemy of democracy is indifference”

“Asked in a YouTube interview by independent reporter @streetcoverage whether he was concerned that the statues could be vandalized, Opolka replied, “Perhaps they can be damaged. But the idea cannot be damaged.”

“The 66 wolves and an information panel encouraging “discussion about racism and violence” will remain at Neumarkt in Dresden until March 23. Opolka then intends to take the installation to the capital cities of other states, like Potsdam and Berlin.”

I was thrilled to be able to see this installation, a bold statement by a progressive artist. But there were other green shoots around town, signs to me that many parts and peoples of the city are taking a stand against the weekly rightist protests that fill the Theaterplatz with hate every Monday night. The Royal Castle, or Dresdner Residenzschloss, home to the State Art Collections –  many of the exhibits I have just seen – proudly posts this banner:

“Dresden State Art Collections – 14 museums with work from all the continents – a big house full of foreigners. Diversity is our strength.”

And I certainly enjoyed that diversity, visiting loads of museums and art galleries during my two days here, from the porcelain hall to the Old and New Galleries (Vermeer! Rembrandt!) to Saxon folk art to armory to sculpture to coins to carpets and more, even the Hygiene Museum, which deserves a post all of its own. One last detail captured my imagination and suggested that the gute Menschen of Dresden are using art in many ways to proclaim their stance against bigotry and hate. In the middle of one of the sculpture halls in the Albertinum, Dresden’s “modern” art museum, I saw a set of these little guys on the floor of the hall and a lot of post-it notes fulling a side wall:

The Spanish artist Fernando Sanchez Castillo created a three-inch high, 3-D template of the young person known only as “Tank Man” when he faced down the Chinese military in the iconic photograph taken in Tiananmen Square in 1989. The fate of this man who was able to stop the tanks for a singular moment that day is unknown and the publication of this photograph is prohibited and censored in China. (My Chinese students had never seen it and did not know the story behind it.) Castillo had thousands of these little figures produced (in a Chinese factory, no less) and has created an army of pacifist resistance on the second floor of the Albertinium.

The exhibit, “Made in China,” will circulate around the museum after its initial installment in the atrium, but we are all encouraged to take one Tank Man from the installation. We are to leave in exchange a note about democracy and human rights, posted on the east wall.  We are to send a photo from the place where we put our tank man as a private monument. (He even has a Facebook page.)

So, clearly a city and a visit that feels as thought there is a big “Work in Progress” sign hanging around the neck of nearly everything and everyone I saw and met. As a result, I will follow the developments here with care. After years of struggle and stagnation, I hope this brave city can find secure and united footing in Germany’s bold social experiment.

This entry was posted in Germany, Uncategorized and tagged Dresden, Wolves. Bookmark the permalink.

2 Responses to Like a phoenix, Dresden rises…but with baggage…