I was going to write this post while I actually was in Vienna, last Tuesday the 22nd to be precise, but then writing an entry about my indulgent meanderings amid glorious historical civic monuments seemed horribly misplaced in the aftermath of the Brussels (and Istanbul and Lahore and…and…) bombings, so I took a bit of a break. I’m back home in Maine now so the intensity of the writing may not be what it could have been, but I still want to share and record some of my time in that remarkable city.

It’s embarrassing to say, but I actually don’t LIKE Vienna. As with a formidable personage, I respect the city, admire it, am in awe at the history and culture, but as a physical space to inhabit, it’s not my cup of tea, even though it wins all sorts of “Quality of Life” awards. That’s part of what I find so fascinating about travel – how one place can “feel” comfortable and right and others not so much. My discomfort comes a bit from its proportions – during the 19th century, under the reign of the Emperor Franz Joseph, Vienna was consciously manipulated to look and feel like the center of empire that it actually was at that time. Ironically, FJ died in 1916 and shortly thereafter much of his empire was stripped away in the aftermath of World War I. There is now a very large and imposing civic head, as it were, on a rather small political body, a fact I’m sure not lost on one of Austria’s most infamous sons, Adolph Hitler.

Ruled much of Europe for 67 years

Vienna, with about 2.5 million folks (a third of Austria’s population), was at one point the largest German-speaking city in the world. From Celtic and Roman origins, the city truly began flowering in the Baroque period and blossomed during the second half of the 19th century with the destruction of the old town walls and the construction of major boulevards and entire neighborhood blocks to house its citizenry, from the wealthiest to the most indigent. It regained a lot of glory after the first World War and maintained its position as a cultural magnet, but the Second World War dealt the city and its inhabitants stronger blows that took decades to heal.

That being said, no trip to Vienna is complete without paying homage to St. Stephens Cathedral, the Roman Catholic 12th century Gothic masterpiece that dominates the Viennese skyline. It is literally and figuratively the center of the city, and has been now for nearly a thousand years:

Located on a (now) pedestrian-only street, St. Stephens is now surrounded by the parade of international consumer brands and outlets that I have now seen in many European cities. One must leave this section of town to 1.) see anything at all remotely Austrian and 2.) to escape the armies of selfie zombies.

A secondary site of homage in town is the Weiner Staatsoper – the Vienna State Opera, where on my first trip there in 1974 I enjoyed my very first live opera for $1.50 in the SRO stratosphere. But little did I mind. The beauty of the music, the shimmering interiors, and the stately dress of the more prosperous attendees more than made up for a couple of slightly sore feet.

All roads lead to music

One of the things that’s hard to do is to give a sense of the size and glory of these buildings. It’s a little easier to sneak up on some of the details, as in the columns that cover the pedestrian walkway on the left side of the picture above:

Naturally, not everything in town can be huge and magnificent – as you know, I’m always on the outlook for the quirky twist. Not as easy in Vienna as in other places, I found it here in the Opera House metro stop:

Tunes to tinkle by

While the Schonbrunn Palace is considered the gold standard for tourists, I frankly was more taken with the Belvedere complex and gardens, built in the 18th century and now an art museum and other venues. The setting is lovely and the views of the city, including the cathedral, a sight to behold:

Mistress of all she surveys – also, apparently, a bit of a good luck charm.

By this time in my travels, I am ashamed to confess I was pretty much palace- and museumed-out, so this day I skipped the tours and galleries and (head hanging in shame) *just went to the gift shop.* Just as Antoni Gaudi is to Barcelona, Gustav Klimt is to Vienna, and of course there is a massive marketing effort to ensure that you can and will buy just about anything you want with a Kiss on it: 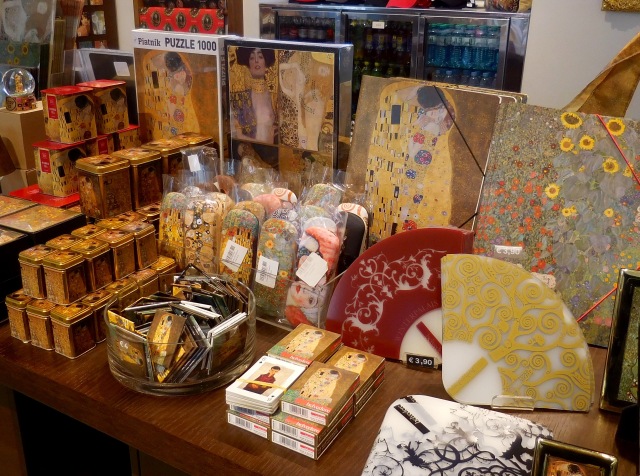 Since I seemed to be failing Tourism 101 that day, I devolved to my favorite city activity – just walking somewhat aimlessly in a somewhat large ovoid path which would eventually lead back to my hotel. Along the way I saw some delightful small snippets which left me feeling a bit more positively about the town:

and of course one of the many archetypal Viennese cafe, bustling outdoors even on a coolish day: 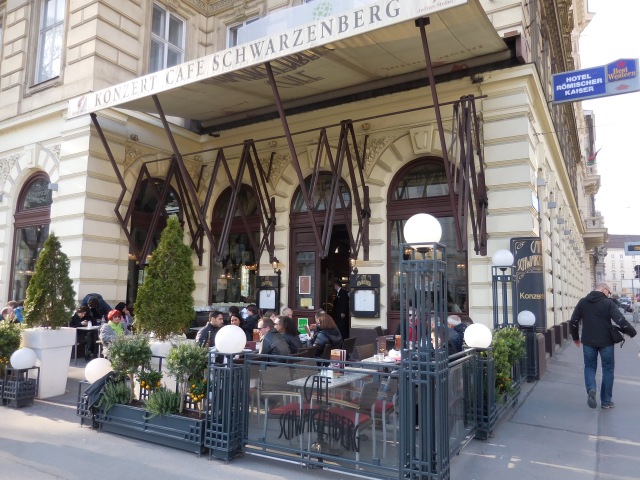 But even though my museum chops had deserted me, I did manage to go to one during my time there – the city museum of Vienna. As I have mentioned below, I have started making these a staple of my city visits because they help ground me in the day-to-day of these old and complex urban landscapes. I was struck by one particular picture and here it is, as a kind of artistic finale to my all-too-short and all-too-superficial brush with Vienna:

Not Klimt’s more famous gilded lady, “Portrait of Adele Bloch-Bauer” (1907), this art nouveau piece speaks to me of the complexity of the city and the age. Yes, she’s beautiful and yes she definitely fills her space with confidence and elegance. But a closer look at her face and the tightness of her waistline suggests some repression, some resignation, definitely some sadness. And so I felt with Vienna – so much beauty, so much resignation. Empire interruptus.

My name is Ozymandias, King of Kings;
Look on my Works, ye Mighty, and despair!
Nothing beside remains. Round the decay
Of that colossal Wreck, boundless and bare
The lone and level sands stretch far away.”
Vienna of course lives and breathes today, an important player in the European landscape. But the dreams of empire – they are long gone.

This entry was posted in Austria, Uncategorized and tagged Vienna, Wein. Bookmark the permalink.