As a last posting on Japan and Tokyo for the season, I thought I’d give you some highlights from the museums I visited during my recent visit. I’ve already covered the National Museum complex in an entry below, so this chapter will just touch on most the others I managed to squeeze in. [I like museums. A lot. But you had probably figured that out.]

Taking them as chronologically seen during my week, first up is the Traditional Crafts Museum in Asakusa:

I had high hopes for this exhibit which were, alas, not quite met. The most interesting thing I learned in my visit is that Japan had (and may still have; my Japanese isn’t good enough to confirm or deny) a vibrant sterling silver crafts tradition. I am particularly fond of the Arts and Crafts movement of the 1880s-1910s in Europe and the US which finally managed to migrate to Japan in the 1920s. Here are some lovely examples of the period:

Accompaniments to a gracious life

The next venue deserves a whole blog of its own, but I don’t have the time or mojo to manage that today. Instead, I’m just going to suggest that if you *ever* get to Tokyo, you really can’t miss the Edo-Tokyo Museum, dedicated to the Edo period (1603-1868) but including some very interesting exhibits on the 20th century including some truly poignant material on World War II and its aftermath. The building itself is pretty show-stopping: 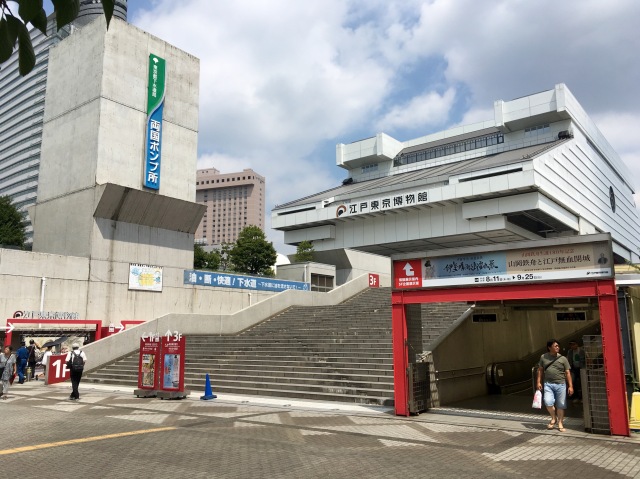 Floating five and six stories above the ground, the enormous structure allows the life-size recreation of multiple large structures including buildings, ships, even the entire Nihonbashi bridge as well as numerous sprawling urban dioramas. I’m going to give you the executive summary of this amazing place with a couple views. First up is a beautiful shot of a Kabuki actor (mannequin) in full regalia:

Singing in the rain…

…and then a look at a live musical presentation to an appreciative audience played in front a a full-size replica of a popular theater of the day: 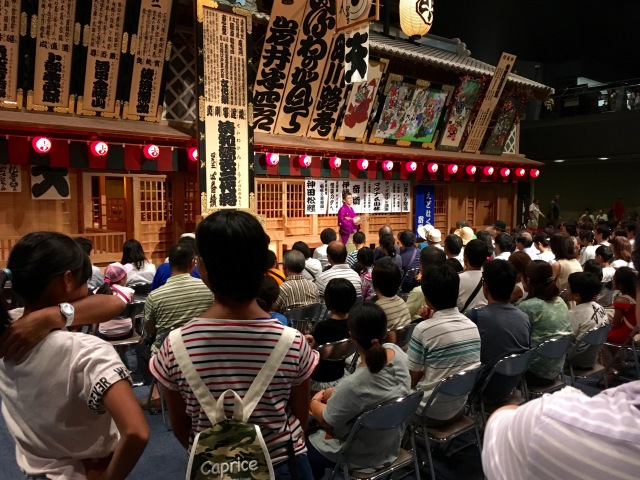 If you have the chance, just.go. “Nuff said.

So after homage is paid to national treasures, I’m a great fan of museums that celebrate the small and unsung. This trip I stumbled across a couple of these that came as a complete surprise and ended up being absolutely fascinating. The first is the Tobacco and Salt Museum:

Since neither of these substances were indigenous to Japan, I found this focus quite remarkable. Salt worldwide, I learned, is relatively easy to harvest as either a mined product (as in Europe) or collected by the seaside (as in extremely warm countries such as Israel and India). Japan was not so lucky.  “Since ancient times in Japan salt has been produced using a unique method: by making salt concentrate (about 20% salt) from seawater as the first step, then by boiling down the concentrate to crystallize the salt. This method is necessary because there are no salt lakes or rock salt in Japan and because salt production using natural solar evaporation is not suitable in the Japanese climate of heavy rainfall and high humidity.” If you haven’t browsed “Salt: A World History” by Mark Kurlansky, you really should.

This museum, however, celebrated one of the European centers of salt production, Wieliczka, Poland. It did so by showcasing a life-size statue of St. Kinga, the Hungarian princess who married a Polish prince in the 13th century and became the patron saint of miners when she insisted her dowry consist of salt rather than gold since it was more critically needed by the people.  Here’s herself made, of course, entirely from a block of Polish salt:

Tobacco, of course, came initially from the Western Hemisphere, making its way to Japan as part of the global exploration and trade that occurred from the 16th-18th centuries. Once it arrived in the East, however, it quickly became widespread and popular. Here’s a scene from a tobacconist’s shop:

…and in what seems like a slightly ironic twist, here’s a picture of General McArthur, the Supreme Commander of Allied Forces who oversaw the postwar occupation of Japan, with his pipe collection…

But he’s *our* occupier.

Here’s one final curious museum which I simply could not pass up, being the life-long leather addict that I am:

Let me get this right. A *museum* dedicated to bags and luggage *from around the world?* Be still my beating heart. And in addition, it’s free? Actually, it was two exhibits in one. The first floor described the evolution of carrying containers, luggage, and women’s handbags over the centuries and then included some of the global superstars of luggage, briefcases, and handbags from around the world. The second floor was a display in commemoration of the founder of ACE luggage, Mr. Shinkawa, whose life and career spanned most of the 20th century and mirrored Japan’s economic and political ups and downs. But first, a shot that will raise the pulse of every inveterate traveler: 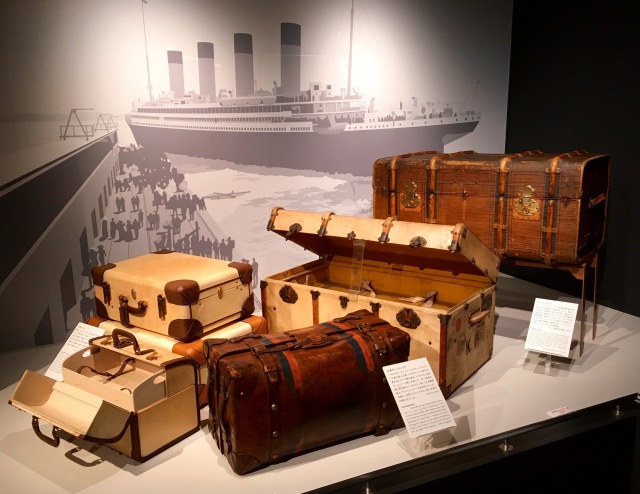 Ready for the Grand Tour

…and then, as an exemplar, a shot of a lovely leather product with a keen reminder of where and how those beautiful objects come to be:

…and finally, a shot of the man himself, the hardworking founder and visionary who brought this company and its products to life and who contributed to Japan’s economic  rise:

Thanks for the memories

So, surfeit with myriad impressions from the Land of the Rising Sun, I will close the chapter on this expedition. Stay tuned for the next installment….probably back to Europe before too long. Thanks for sharing these wonderful images and adventures with me.

This entry was posted in Travel - Japan and tagged Museums in Tokyo. Bookmark the permalink.