Looking for solace in remembrance of the past

If there were ever a country that has been handed its rear body part to it on a platter due to a bad election result, it would of course have to be Germany and and the decision its citizens made in 1933 to elect a certain megalomaniac sociopath to power. In my visits here to Berlin, I have repeatedly mentioned my respect for the Germans’ bold move to maintain many of their sites of shame and physical fragments of painful history lessons learned during that era as edifying examples to future generations.

Yesterday, November 10th, 2016, as I tried stitch my consciousness back together in the realigned universe following the American election, I decided to try to seek some sort of insight or consolation from one of those fragments of history left strewn across its Berlin’s civic landscape. I headed for a little solace and guidance to one of the first places I had visited in Berlin now about two years ago – die Kaiser-Wilhelm-Gedächtnis-Kirche, the Kaiser Wilhelm Memorial Church. Here’s a shot of the church as it looked that day in early December 2014 and as it will again soon, Christmas preparations being already well underway on the Ku’Damm: 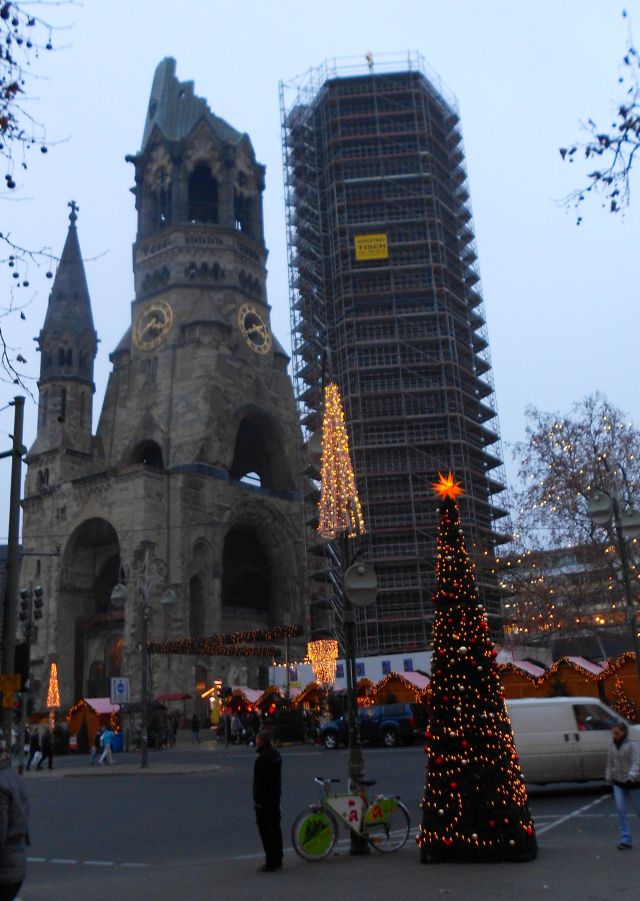 Days of Future Past

What you see here is the remnant of the church on the left (the tower on the right was then and is still undergoing scaffolding for renovation) in the condition the war left it in, as “a memorial to peace and reconciliation” and “the will of Berliners to rebuild their city after World War II.” (Slightly more cynically, it’s also known locally as”der Hohle Zahn,” meaning “The Hollow Tooth.”)

While I am not a religious person by any stretch of the imagination, at moments like this in our national and international life I think I and many of us are drawn to some traditional considerations of Things Larger Than Ourselves as a way to try to find perspective, to reorient our internal gyroscopes, as it were.

But no post of mine would be complete without your minimum daily requirement of history and culture. So without further ado, here’s the quick overview of the place. Quick and dirty from visitberlin.com: “The neo-Romanesque church meant to glorify the first German emperor was built between 1891 and 1895 and was designed by Franz Schwechten.”

Here’s a look of the building itself in situ during those early heady days of the 20th century: 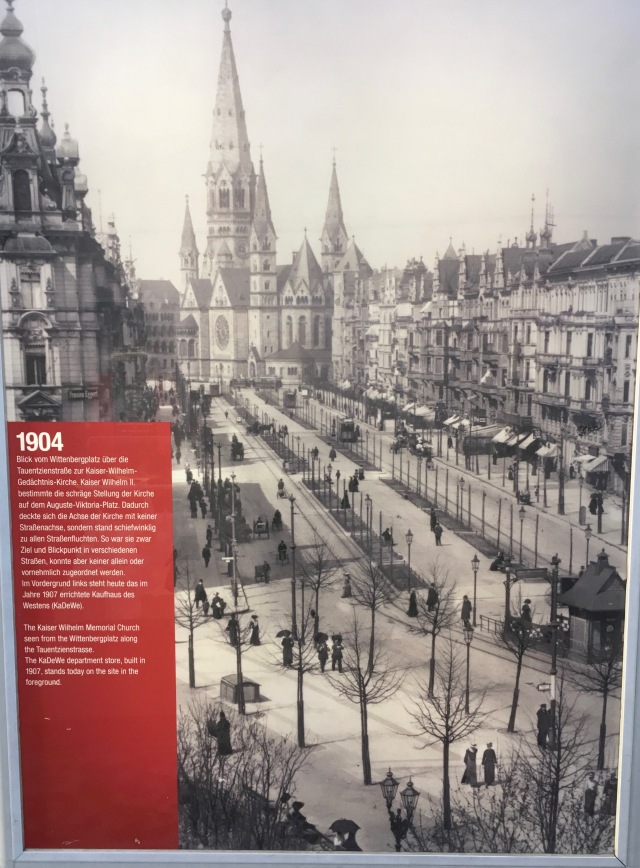 Nary a crosswalk in sight

After the church was destroyed in an Allied bombing raid on the 23rd of November 1943, the ruins, which served as a testament to the horrors of war, were going to be demolished in 1956 so as to make room for a new structure.”

“However, the people of Berlin protested fervently in favour of integrating the ruins into the new church.”

No roof to block God’s message

“The modern structure was built between 1959 and 1961 and was designed by Egon Eiermann. The church consists of honeycomb-like concrete elements, in which glass blocks can be found. Inside the octagonal nave of the church, the coloured glass blocks produce an intense blue light and meditative calm.”

But what I was interested in yesterday, and spent more time considering, were the stories and reminders of the Bad Old Days and how they were overcome after the war by thousands of people on both sides working intentionally and patiently together to put the ghosts to rest, as much as they ever can be.

The first symbol I want to share with you is the Cross of Nails which Wiki tells us “was made from nails in the roof timbers of Coventry Cathedral. This cathedral had been severely damaged in a German air raid on 14 November 1940.” I have also learned that “there are over 160 Cross of Nails Centres all over the world, all of them bearing a cross made of three nails from the ruins, similar to the original one. They are co-ordinated by the International Centre for Reconciliation.”

The next keepsake is an icon cross which was given by the Russian Orthodox Church shortly after the way but was only allowed to be delivered in 1988 when relations between the two countries started to thaw a bit.

As a reminder, Germany lost eight million people, military and civilian, in World War II to America’s roughly 400,000 deaths. The Soviet Union lost an almost unfathomable 20 million of of their then total of 170 million. The skull at the bottom stands as a grim reminder of that loss.

The third symbol is a drawing entitled “The Stalingrad Madonna.” In the fall of 1942, 90,000 members of the German Sixth Army were encircled by the Soviets near that city.  A German field surgeon who had trained as a pastor, Kurt Reuber, drew this work on the back of a Soviet map during the Christmas season for his fellow soldiers “as a symbol of hope in a time of darkness, death, and hatred.” The Germans were all taken prisoner in February 1943 but only 6000 of them actually survived the camps at the end of the war. Reuber himself died a prisoner in 1944 and this drawing, with others, somehow found its way back to his family:

The church itself remembers its own members who lost their lives during the war, many for working against the regime.

…and last, a very poignant and personal note from someone who finally found his way to forgiveness in 2007 as a result of a musical service in the church:

In the new sanctuary building, I noticed folks lighting candles and drew closer…

…but while I couldn’t quite bring myself to follow that tradition, a little sign nearby caught my eye:

(No one’s offered THAT to me in a while)

…and so I took advantage of this opportunity by pulling out the little notebook I carry with me always to write the request that is lying heavily on my mind and probably yours as well:

I hope this visit helped you as much as it did me. I wish for you all during this coming holiday season all the “light, life, and love” you can possibly muster. Courage.

This entry was posted in Germany, Uncategorized and tagged Berlin. Bookmark the permalink.

3 Responses to Looking for solace in remembrance of the past