Good friends G and V had been encouraging us to come visit them in Bari, and when M from Poland said she was taking a short vacation there this past weekend, T and I decided we had to dash down for the weekend. And I’m so glad we did. Bari is an example of one of those places that had only ever been at the far end of my radar, solely in connection with a friend from graduate days who had been born there. Now, along with Belfast, Bruges, and Berlin, it has turned into one of the “B” cities that has unexpectedly both delighted and inspired me to return as soon as possible.

Bari, located at the top of the heel of Italy in the region known as Puglia, is a harbor city dating from Greek and Roman times. Although briefly part of an emirate, for most of its history it was the subject of multiple tugs of wars between various Italian factions, Lombards, the Holy Roman Empire, Byzantium, and goodness knows who else. It grew into regional prominence under the unlikely patronage of Napoleon’s brother-in-law, Joachim Murat, Prince of Naples, who expanded the city greatly in the 19th century, appending a large rational French urban grid to the small ancient city on the harbor. Mussolini added his own distinctive mark in the early 20th century with a number of oversized structures along the waterfront. Today Bari is a charming, vibrant, and surprisingly un-touristy city with lots of cultural and shopping options.

In Pescara, our closest transportation hub, T and I hopped on the Freccia Bianca, the fast train that flies up and down Italy’s Adriatic coastline. It took us just under three hours to cover the 300+ kilometers and dropped us gently at Bari’s central station, leading me to think I was somewhere in France (probably the influence of Murat): 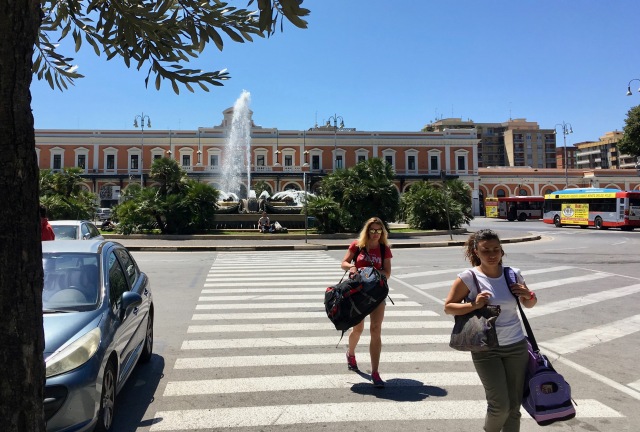 What we hadn’t factored into our plans – but which managed to work out just fine for us – was that the finance ministers of the G-7 had also planned to be in town the exact same weekend:

It’s easy to spot economists – they all dress in identical versions of navy suits and white or light blue shirts, that weekend  sporting huge yellow badges, and surrounded by various forms of security forces. What was equally easy to spot was the massive official police presence all over town, blocking access to some of the tourist sites (the castle, in particular, where the meetings where held and part of the corniche along the sea.) I have rarely felt so safe…so although I couldn’t get any closer, here’s a shot of the Castello Normanno-Svevo, built around 1132 by the Norman/Sicilian King Roger II, complete with a few dozen of the local constabulary:

As part of the security measures, a number of the main streets were completely blocked off to vehicular traffic, lending a somewhat carnival air to the proceedings (although the actual number of pedestrians was radically reduced as a consequence). So on these lovely warm spring days and evenings, it felt as if we had the city completely to ourselves. Here is a shot of a main square with decorations from a recent festival celebrating the patron saint of the city, San Nicola, a fourth-century wonder-working churchman who later became transformed into our Santa Claus:

No visit to Bari is complete without a long lovely ramble through Bari Vecchia, the labryrinthian historic center of the ancient city recently rehabilitated from the ravages of urban decay and crime. Our quick visit didn’t allow me one of my favorite pastimes in a new city, that being a visit to the city museum. But as small consolation, I took a shot of its location in the entrance to the old town, with a quick promise to return as soon as possible:

The genius of these old cities is, of course, that the winding alleys block both the wind and rain of the winter as well as the heat and blazing sun of the summer, particularly in a place like Bari that is plagued by precepitation mixed with dust blown up from the Sahara across the Mediterranean. The buildings remain temperate and protected nearly year-round. One does wonder, however, precisely how, ahem, sanitation was managed in days gone by; happily this is an issue that has been resolved in the here and now. Around a far corner, we stumbled onto…the remains of a Roman temple, today just standing guard over recent sanitation of the laundry variety:

A nearby inscription reads something along the lines of: “Under the patronage of the Comune, these monumental remnants of the ancient Bari buried forgotten for many centuries now again see the light.” October the (chiseled away) 1939 (chiseled away – year 17) of the era (chiseled away – Fascist) of the newborn Roman Empire.” (Language apparently redacted by an anonymous civic volunteer.) And that’s all she wrote.

But lest you think the Bari Vecchia is all work and no play, here’s a shot of a festive residence along the Le Vecchie Mura, the massive and pedestrian wall that separates the old town from the water and harbors on each side of it:

…and a few local ragazzi enjoying the afternoon: 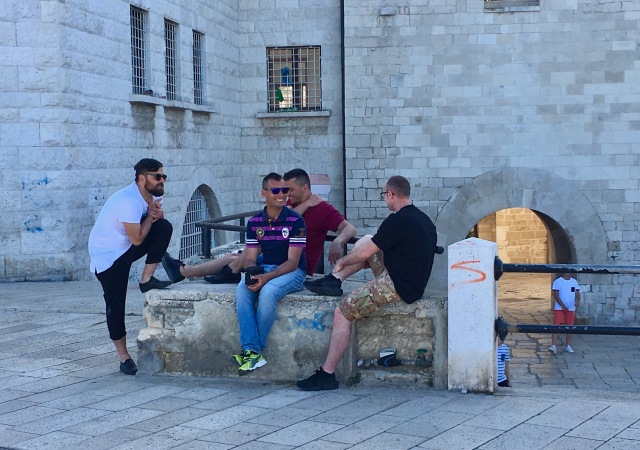 One last view of boats in front of what I think I remember as the customs house, one of the reminders of Uncle Benito’s reign:

As you might imagine, all this hoofing, even without the press of crowds, can bring about a mighty hunger and thirst. One of southern Italy’s unique gastronomic offerings is Taralli, small (savory) or large (sweet) bread circles. They’re made of flour, white wine, olive oil, and salt, but no yeast, and oven baked:

Bet you can’t eat just one…

…and of course we did not. In addition to these nearly addictive munchies, G & V prepared a wonderful lunch for us and some other lucky friends. The meal included a wonderful pasta and some fantastic cheeses, along with the ubiquitous red and white wine but complemented particularly by G’s mother’s amazing Limoncello and some other lethal homemade liquors. Here’s a shot of the table after we had had our fill. T looks particularly satisfied…

…so there you have it…a wonderful get-away that kept me happily distracted for a couple days before our visit to the police the following Monday to submit the paperwork for my Permesso. But I have fallen in love, and T knows he’s in for at least one more visit to Bari before too long….I have to see the castle and the museum and walk again along the long lovely wall along the sea…

This entry was posted in Italy, Uncategorized and tagged Bari. Bookmark the permalink.

5 Responses to Un Bacio di Bari (A Kiss from Bari)