T and I have just returned from our wonderful week traveling in Japan. You may have seen my blog on Ginza, below, and we also spent a bit of time in Nagoya visiting a pen friend and touring Osaka with a delightful former student of mine. My focus for this trip, however, was on the former capital of Japan, Kyoto, a city I have hoped to visit for some time. And like all figments of imagination, my expectations of the place…were way off the mark. It was completely different from what I expected, and yet absolutely wonderful at the same time. Here’s a shot of the happy travelers on the shinkansen (bullet train) starting their way west: 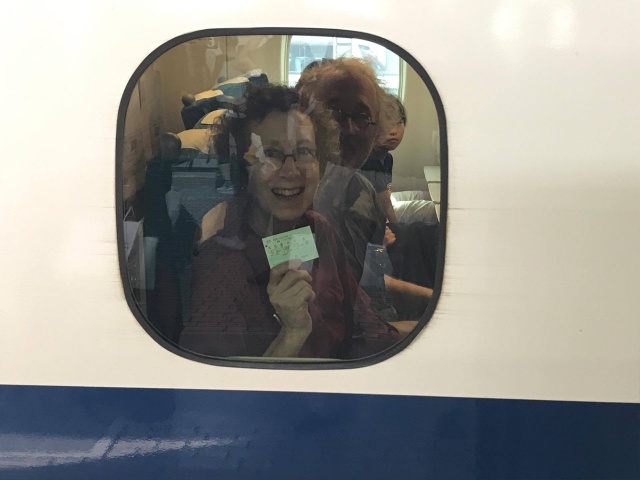 My image of Kyoto was that it would be similar to the kinds of historic cities that dot Italy and much of Europe – fairly smallish with a clearly defined city center in which one finds all the cool stuff within easy walking distance. Hah!  When we reached the city, we discovered that it is a huge sprawling metropolis and that in a manner similar to Los Angeles, anything worth seeing…is some distance from anything else worth seeing (with some exceptions). So we quickly mastered the subway system (two intersecting lines forming a cross in the middle of the city) and got ready to log some serious walking mileage.

August is festival time in much of Japan, and Kyoto is no exception. Thanks to a most informative agent at the train station information booth, we learned that we had arrived on the last night of the Okazaki Promenade, “a feast of sound and stars,” in the words of the tourist brochure. In short, one six-block long stretch on Nijo Street was turned into a nighttime fairyland in honor of Tanabata, or Star Festival, a time when people write wishes and tie them to tree-like objects which are later burned to send the wishes to the heavens. It is, of course, much more interesting and complicated than that  — see Wiki at https://en.wikipedia.org/wiki/Tanabata — but we just enjoyed being  part of a big beautiful community event with loads of friends and families jostling along an illuminated path on a sultry steamy summer evening. T took this shot of a young attendee meandering just ahead of us on the path: 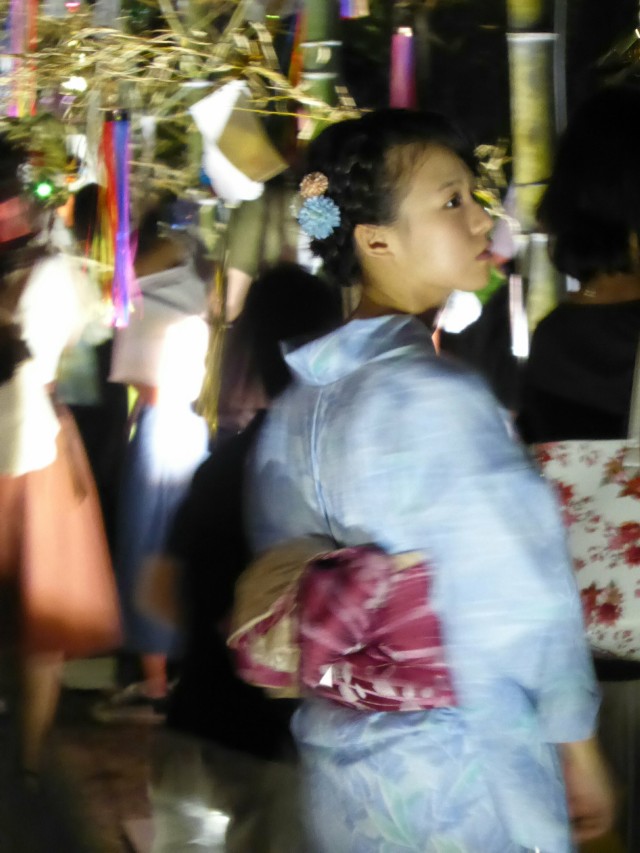 There was a section with lights overhead that shimmered and shifted to music, a section with trees covered in wishes, and a section with a small water channel containing a gorgeous silk strip of cloth, which was about four feet wide by 20 feet long and rippled over rocks and under water while being illuminated by carefully placed spot lights: 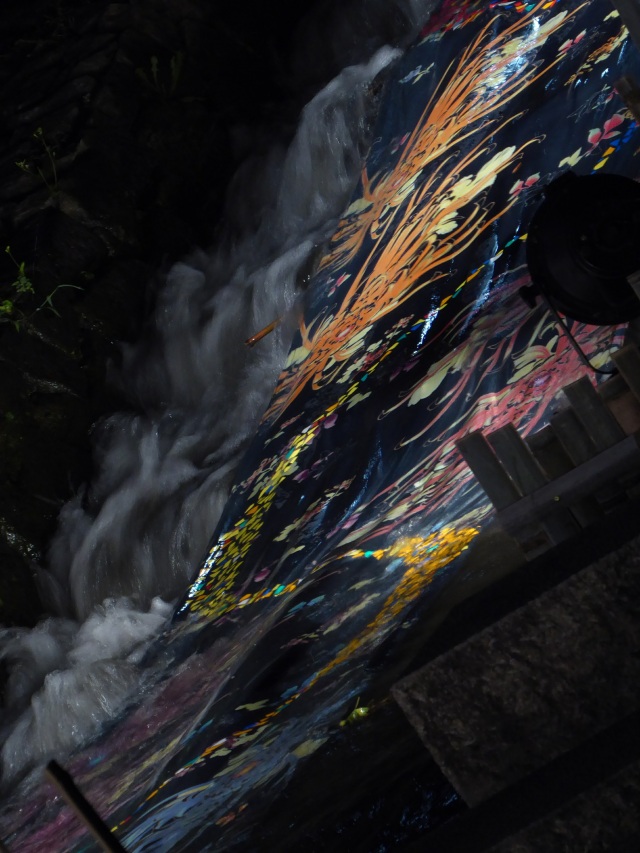 The next day we hit the tourist trail with as much enthusiasm as the humidity would allow. Our focus was the Higashiyama area in the eastern foothills of the city where a number of the city’s treasures are conveniently sprinkled along a walking path. This next shot is at the Yasaka Shrine, originated in the seventh century CE and one of the most famous shrines in Kyoto  where, as T noted, we could actually see people engaged in their spiritual practice (unlike most of the religious sites in Europe where only tourists fill the aisles of churches and cathedrals): 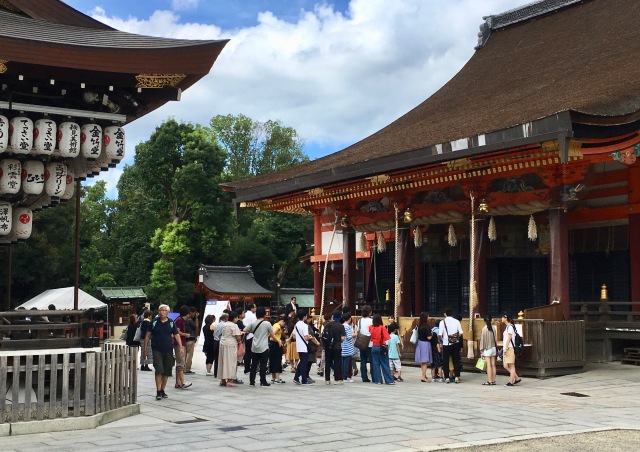 The walking path we planned to follow would have been utterly delightful…had not a few thousand other people decided to walk it at the same time. In fairness, we planned this trip because it followed the end of my teaching contract period, but it managed to overlap the etremely popular Obon Festival in Japan when many people have time off from work and travel to see family for some kind of ancestor worship Most, it appeared, came right here: 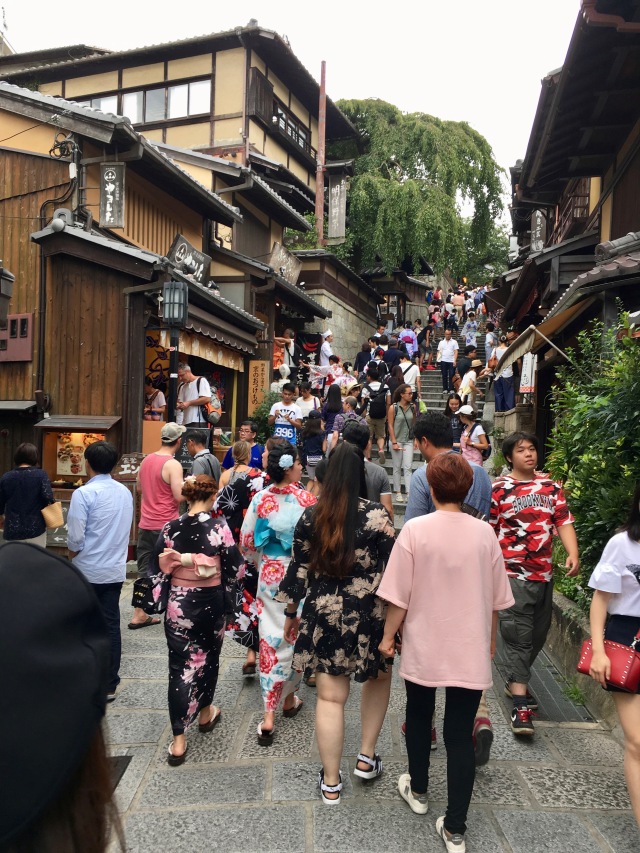 Fortunately, the madding crowd (always polite and totally nonthreatening in this part of the world) provided welcome glimpses into the lives and passions of others: 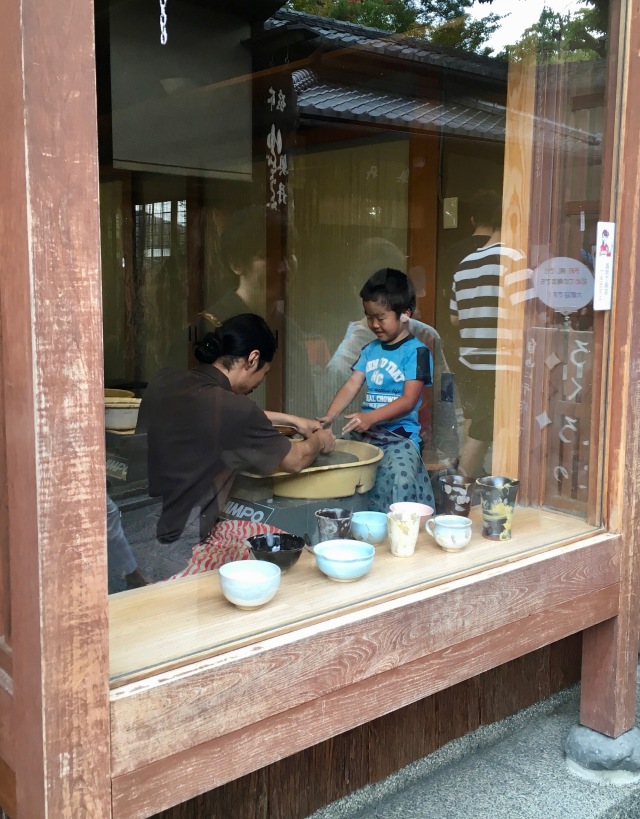 …as well as provided diversions with specific merit-earning recommendations: 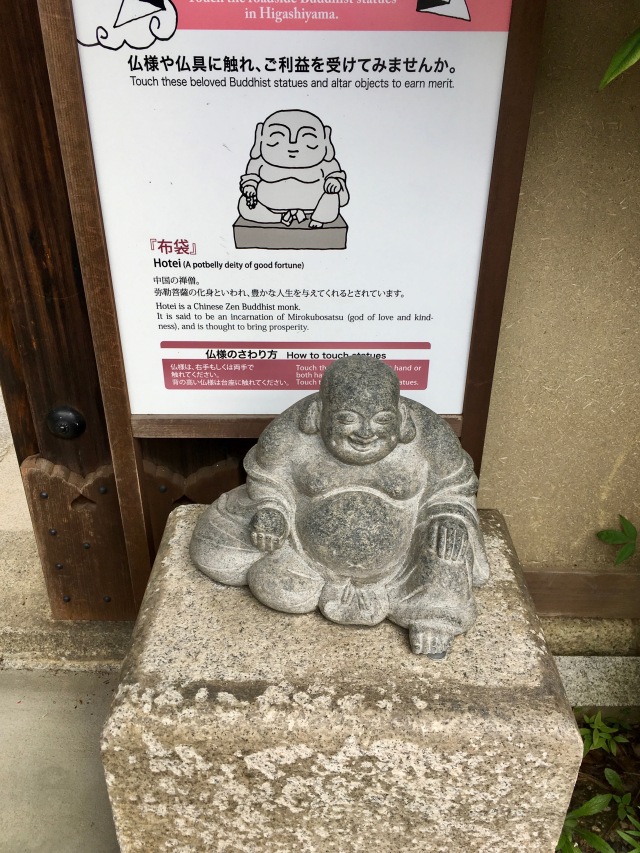 Not surprisingly the teeming holiday hordes were charming only for so long, and in order to restore some sanity we had the recommendation of my student Dr. I to head off the walking street and visit the Kodai-ji Temple. This turned out to be, for me at least, one of the highlights of the whole visit. Formally known as Kodaijusho-zenji Temple, this quiet piece of landscape was established in 1605 by the noblewoman Kita-no-Mandokoro in honor of her late husband, Toyotomi Hideyoshi, Japan’s second great “unifier” (1536-98). The complex itself is a a Zen temple and hence it is far less decorated than many of the other temples in Kyoto and Japan; the structures are connected by a meandering path and is set in a beautiful park that is scrupulously maintained. The overall impression is of great peace and harmony, giving both T and myself perhaps the most serene moments of the last year or so. 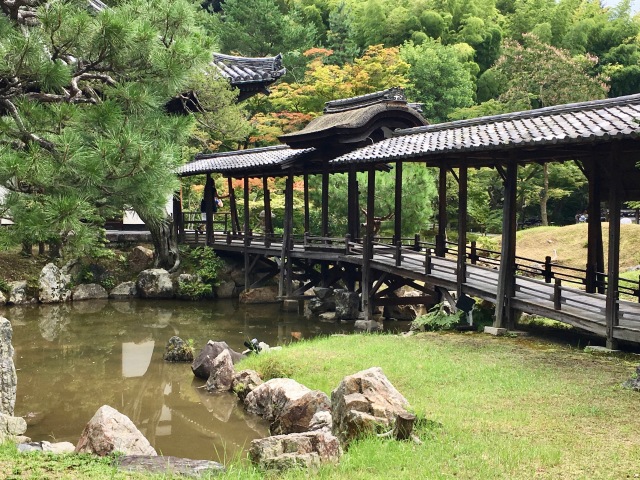 Nearby we stumbled across the Ryozen Kannon, “a monument to the second world war’s unknown soldier erected to the memory of more than forty-eight thousand foreign soldiers who perished on Japanese territory or on territory under Japanese military control.” This complex includes a shrine, a mausoleum, and a Buddhist “Homa” Hall. Looming over all is a 80-foot high concrete statue of the compassionate Bodhisattva Avalokitesvara (aka Kannon). This piece in addition specifically commemorates the Japanese “who sacrificed them-selves in the last war and for the establishment of a peaceful Japan.” T and I were touched by the sentiment (particularly at this moment in history) and added our incense and hopeful thoughts to the array: 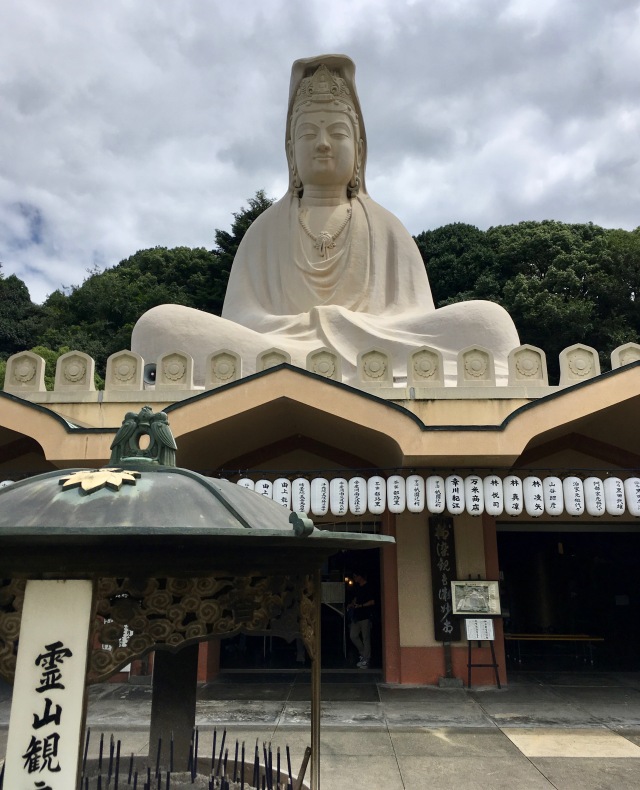 But by this time, the heat and history had caught up with us and we decided to head back and regroup. Before we could take our leave of this utterly lovely area (far too soon and with far more to be discovered on another trip, hopefully), T caught this view of a little geisha who had decided she also had had enough of being polite and pictured for the day: 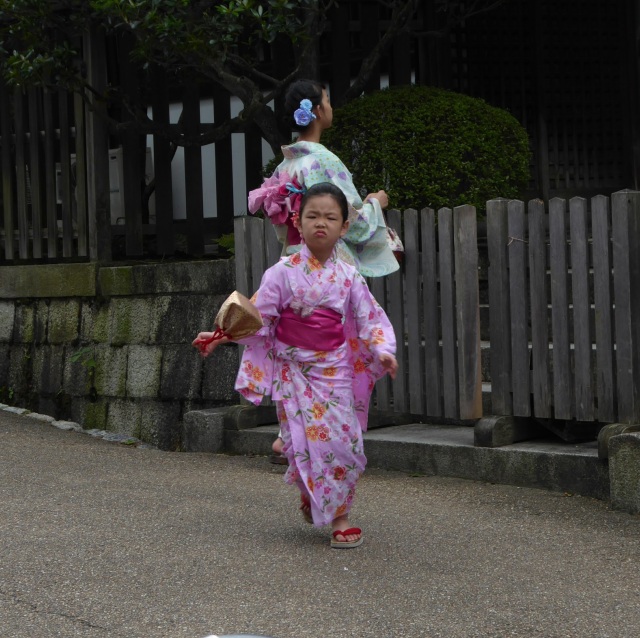 You can dress them up but…

…and happily before we melted down completely ourselves, we escaped to the cooling respite of our air-conditioned accommodations for a little hydrated R&R.

Back in Italy now for a bit, then the plan is to Berlin for the fall. Thanks for joining me on these adventures.

This entry was posted in Travel - Japan and tagged Kyoto. Bookmark the permalink.