A hint of Hamburg

It’s unfortunate that many of us make our first acquaintance of the word “Hamburg” through the lens of that most American food group, the hamburger. It’s true that there is a kind of flattened meatball from the region known as “frikadelle” (as in Danish) that probably emigrated to the States and was sold by someone from Hamburg (the urban legends vary). But to frivolously dismiss the city because of our culinary connotations would be a serious mistake, as I am now learning, thanks to the fact that I have newly acquired friends and in-laws in the region that invite more frequent visitation.

On my most recent trip there, I had some free time and thus, as often is my want, joined one of the excellent walking tours many cities here offer, locally Robin and the Tour Guides. Here’s a picture taken by our excellent guide Phillip of our valiant troop standing at the alter of St. Michael’s Church at the conclusion of our chilly but most engaging two-hour excursion: 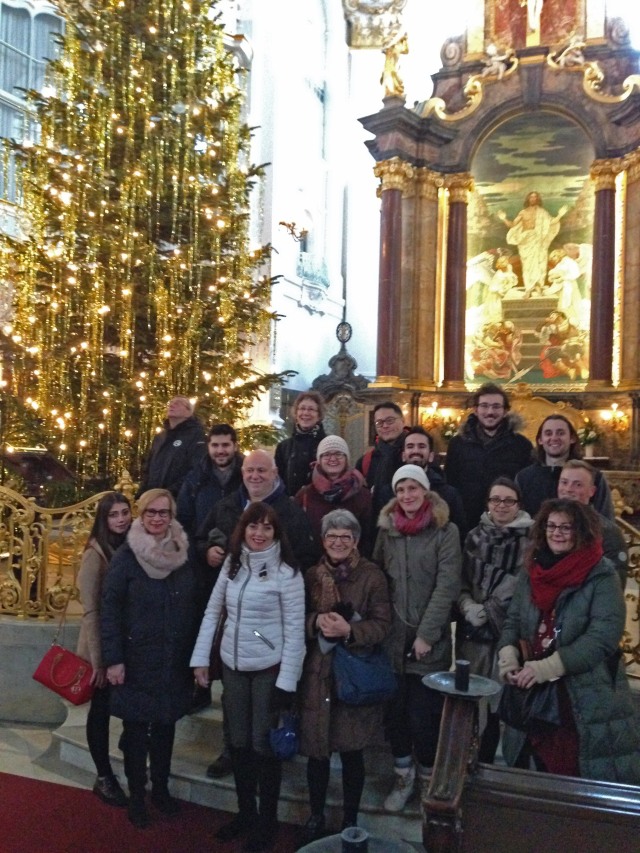 But to get to this point of ecclesiastical rapture, there was a lot of distance to travel and a lot of history to try and absorb. I’ll try and just give you the highlights.

Hamburg, like most major (and minor) cities in Europe has a long and tortured history. Now Germany’s second largest city (and its richest by far), it began as a fort on a high spot in a bog that was repeatedly destroyed by Danes and Obotrites, a fierce Slavic tribe that lived just to the east of Hamburg. After a bit of stabilization, the town was given a charter (now disputed as a fake) by Frederick I, the Holy Roman Emperor that allowed them to become an Imperial Free City and basically make money hand over fist for centuries (and they haven’t stopped yet). In 1241 Hamburg joined with nearby Lübeck to form the core of the Hanseatic League, a powerful trading consortium that functioned along the coast of northern Europe for over three hundred years. Here’s a shot of Fred himself (looking quite imperial) at the top of the shot and Phillip at the bottom: 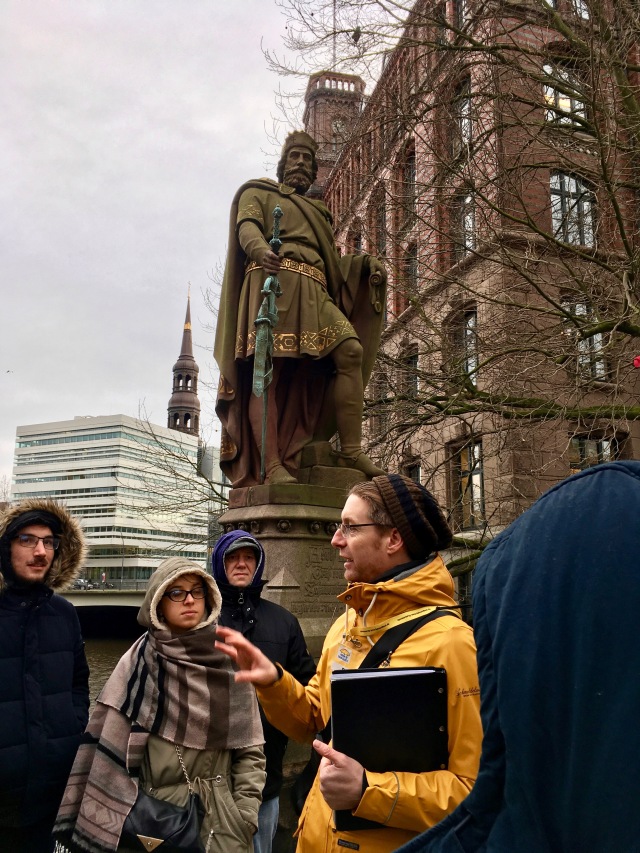 Lots of other important things continued to happen (of course) for a few hundred years, but the next major game-changer was the “Great Fire” which blazed for three days in May of 1842 and ravaged over a third of the city at that time. Wiki tells us “It destroyed three churches, the town hall, and countless other buildings. It killed 51 people, and left an estimated 20,000 homeless. Reconstruction took more than 40 years.” Here’s a shot that shows the spot where the fire started. You can see the older buildings on the left and the newer ones on the right. Fire-fighting efforts were not helped by the fact that much of the water in the canals was allegedly mixed with beer and hence helped, not hindered, the flames to grow. 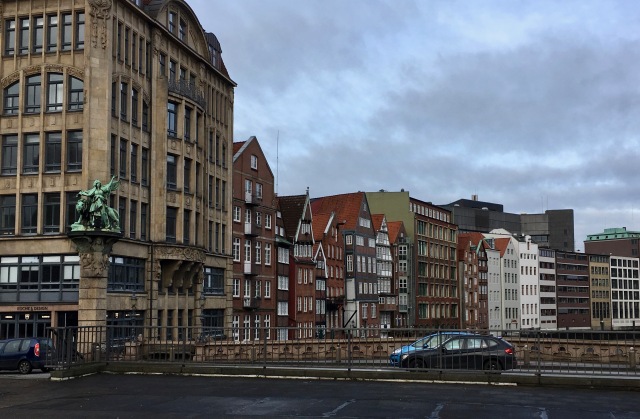 Not a cow in sight (with apologies to Chicago)

One of the buildings destroyed was the old town hall (“Rathaus”), which has been rebuilt but is now re-purposed as a very trendy eating establishment. The new Rathaus is a massive and inspiring neo-Renaissance-style building that took over ten years to build and now consists of nearly 200,000 square feet of space divided into 647 rooms. Here’s a shot of the tower: 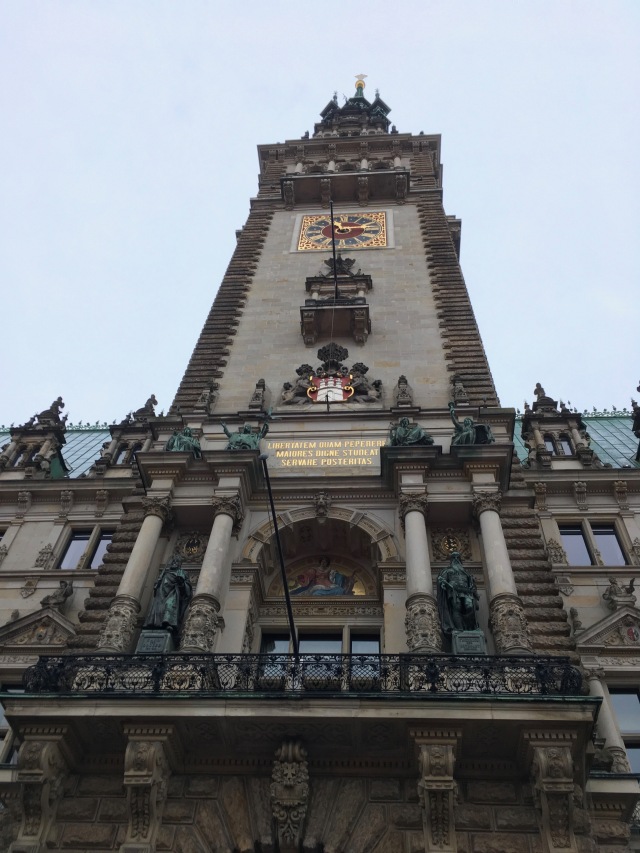 Not surprisingly, every statue and every piece of decoration refers to some historic theme, motif, or civic hero, but I’ll just say you need to come and see it for yourself. In the inner courtyard of the Rathaus, there is a lovely statue of Hygieia,the goddess of health and hygiene in Greek mythology. After a terrible cholera epidemic in 1892 that lasted for ten weeks and killed (officially) between eight and nine thousand people, the city fathers made a commitment to clean (er) water. Until then, many people, including children, had drunk beer instead. 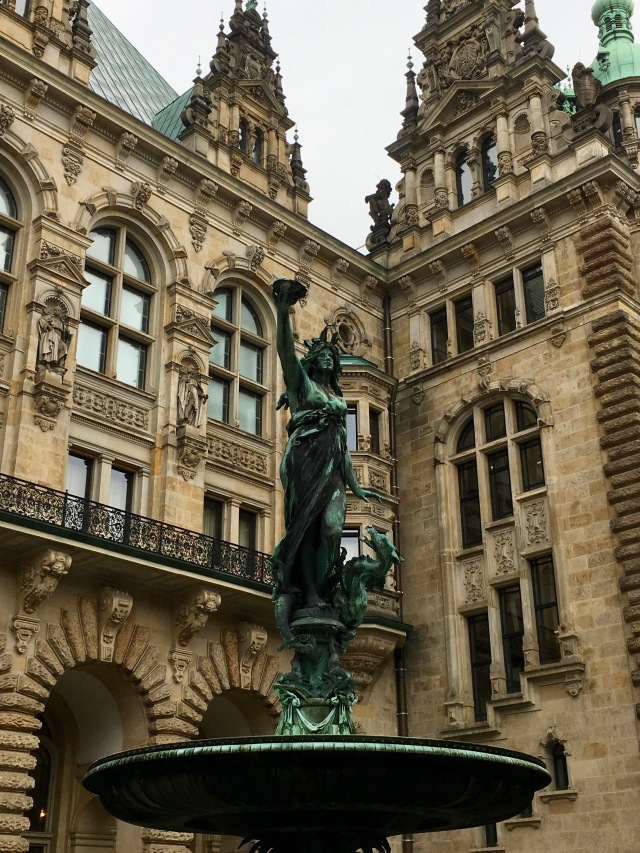 Cleanliness IS next to godliness…

Hamburg rebuilt and reorganized after both the fire and the cholera outbreak, and one of the most dramatic civic developments was the “Speicherstadt,” the warehouse district. It was built between 1883 to 1927 to serve as a duty-free zone and is one of the largest warehouse districts in the world, particularly considering that it, like much of the city, is supported by thousands and thousands of oak pilings. It is nearly a mile long and has recently (2015) been declared a UNESCO world heritage site. There is now another warehouse district in the development stage and this one is becoming an amusement and entertainment mecca. 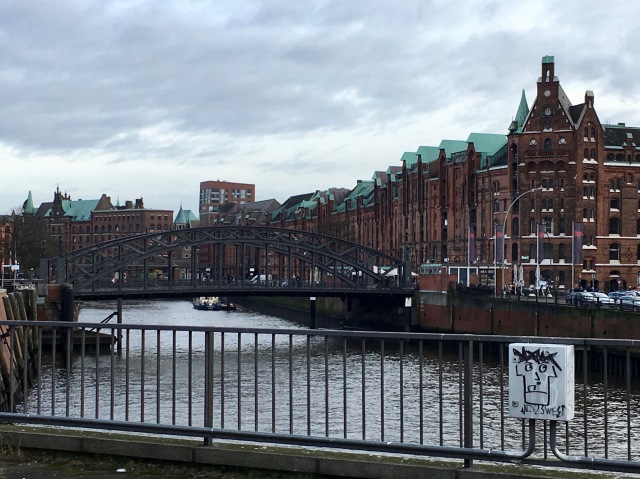 We, however, are NOT amused…

When I said things were bad, indeed they were (from time to time). We got Viking marauders, we got a Great Fire, we got a cholera epidemic, and, of course, we got World War II bombing raids. Wiki tells us “The attack during the last week of July 1943, Operation Gomorrah, created one of the largest firestorms raised by the Royal Air Force and the United States Army Air Forces in World War II, killing 42,600 civilians and wounding 37,000 in Hamburg and virtually destroying most of the city…The unusually warm weather and good conditions meant that the bombing was highly concentrated around the intended targets and also created a vortex and whirling updraft of super-heated air which created a 460 meter high tornado of fire.”

One of the victims of those fire tornadoes was St-Nikolai-Kirche, one of the five major Lutheran churches and for a time in the 19th century the tallest building in the world. Like its cousin the Kaiser-Wilhelm-Gedächniskirche in Berlin, it has been left in ruins as a reminder that, basically, war is hell. I wish we didn’t have to keep remembering this. 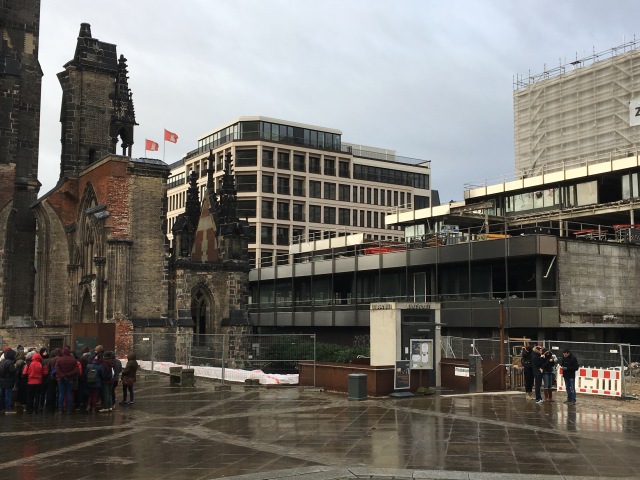 As we ambled towards the end of the tour, we caught a glimpse of the newly opened (2017) Elbphilharmonie Hamburg. Built literally on top of a historically protected warehouse, the “Elphi” as the natives call it, is now one of the largest and most accoustically advanced performance spaces in the world. Opinions vary as to whether the building resembles “a hoisted sail, water wave or quartz crystal,” but it is very distinctive to be sure *and the view from the deck is spectacular.* Happily the view is free since concert ticket prices are pretty spendy, and the building itself went over budget anywhere from three times to ten times, depending who you ask. At nearly 800 million euros, you gotta really hope the place makes things sound great. 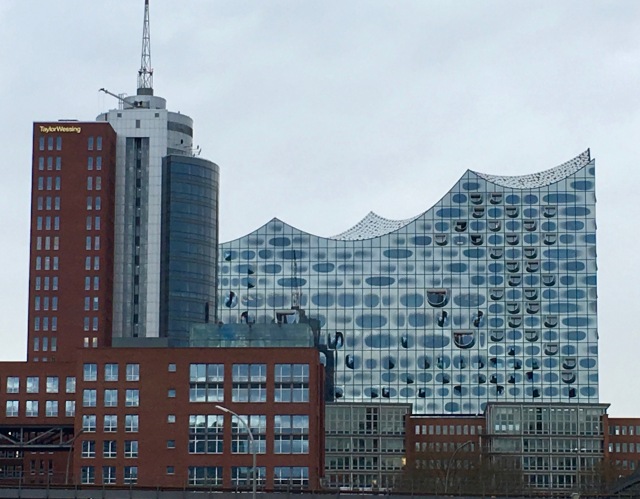 Shortly after this shot, we ended up at St. Michael’s church, the interior shot from the top of the post. I was yet again, as I so often am, enraptured by the centuries of stories and history that are revealed in these civic remains and very much look forward to continuing my exploration of this diverse and fascinating city – even if it means braving the in-laws and some odd little meatballs….

This entry was posted in Germany and tagged Hamburg. Bookmark the permalink.

5 Responses to A hint of Hamburg