Dear readers, the muse has been a bit silent of late, certainly not for lack of topics, but rather because I have been sucked up into the sizzling writhing morass that currently passes as politics in my country. Quoting from Joseph Conrad in Heart of Darkness, “He has to live in the midst of the incomprehensible, which is also detestable. And it has a fascination, too, that goes to work upon him. The fascination of the abomination  (emphasis mine) – you know, imagine the growing regrets, the longing to escape, the powerless disgust, the surrender, the hate.” Anyway. I’ve been glued to MSNBC and basically every other news outlet I can get my electronic fingers on of late, and my writing (to say nothing of my sanity) has suffered a mite.

But time to get back on the horse, as it were, and what better place to start than Ravenna, Italy, where I currently find myself. My goal was to spend some serious time (a month) in a small Italian city where I could get a better sense of the culture and to use it as a base to explore a part of the country I don’t know well. Ravenna is home to about 160,000 gentle souls and lies within shooting distance of Bologna, Venice, Ferrara, Modena, Parma, and a number of other interesting spots in the northern area of the country, plus it is interesting  in its own right. So here I am for a spell, and let me share a bit with you.

Ravenna is best known for its amazing mosaics that are contained in eight early Christian monuments collectively proclaimed a UNESCO World Heritage Site in 1996 as well as a diverse collection from the Roman era. But what has come to me during my walks over the past week or two is the wistful sadness of a place that was REALLY SOMEWHERE VERY IMPORTANT FOR A LONG TIME but is now a modest one-or-two day flyby on an alumni arts and architecture tour for well-heeled tourists. Odd how one (I) pick up these feelings, but there you are.

But before I completely succumb to the nostalgia of the place, a few pictures. Here’s the view out the window of my lovely little AirBNB flat. I am staying just a block south of the historic city center in a little neighborhood with lots of lovely little shops and businesses: 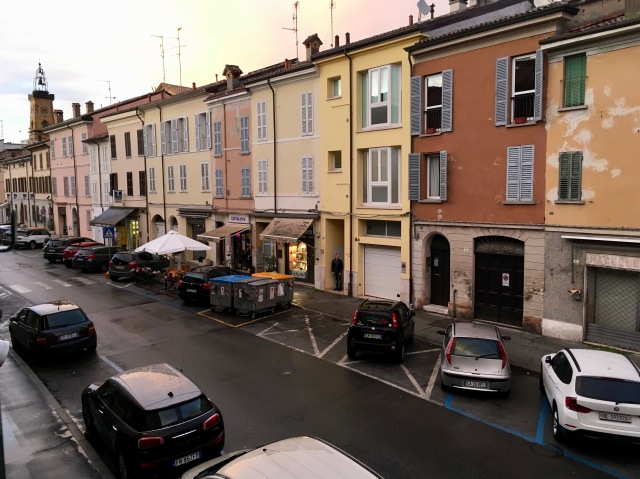 Where everybody knows your name

A short walk away (everything is a short walk away) is the Museo TAMO, “Tutta l’Avventura del Mosaico,” a good place to start to understand the breadth of the mosaic culture  in Ravenna and indeed all of Italy. Set in a historic building itself, the church of San Nicolò, it is a ode to this beautiful and historic art form: 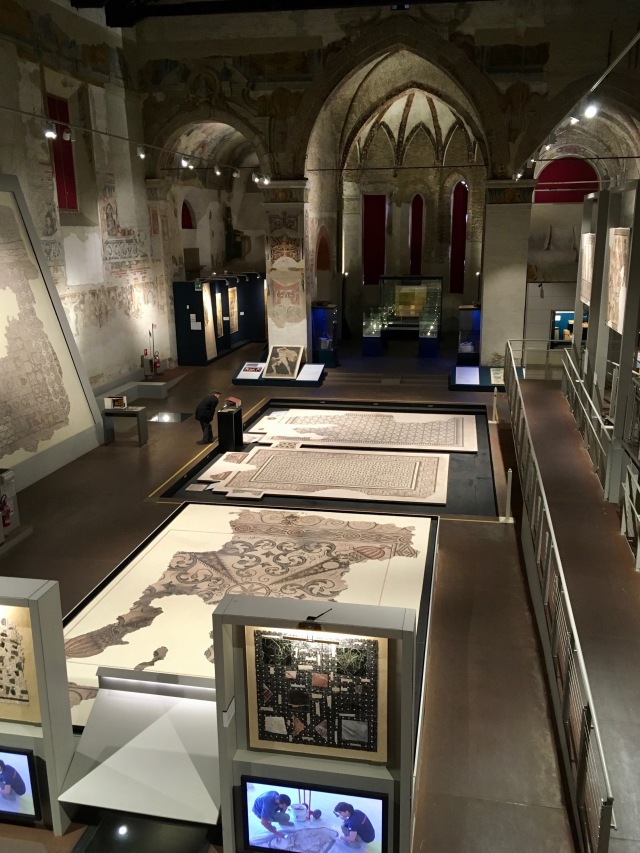 …and while I really enjoyed this overview and initial insight into the world of mosaics (about which I had known zip nada before this trip), the best part is seeing the work in situ, as it were, integrated into buildings that can take advantage of the size and impact of the materials. Here is one shot of the mosaic decoration on the interior of the Basilica of San Vitale, the most impressive of all the monuments. The building was completed in 547. Let that sink in. 547. 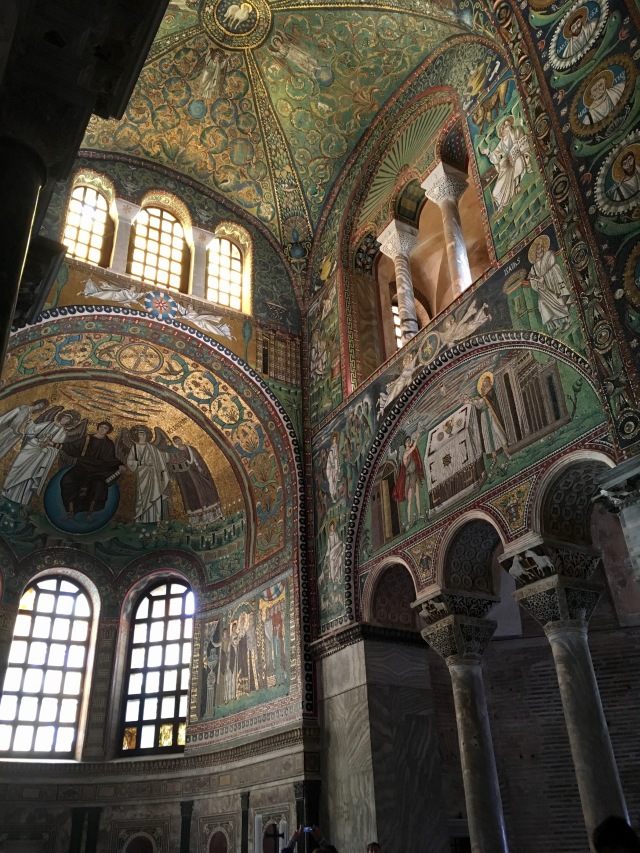 Reminiscent of the Hagia Sophia in Istanbul

There really aren’t words to describe this. I plan to go back again and again. Because of its date of construction, the building contains Roman elements, Byzantine elements, and some of the earliest examples of flying buttresses which later made their way into Gothic architecture. Google this thing if you don’t believe me, it’s amazing.

Nearby was an intriguing little pool, still inside the building. My pagan impulses immediately thought that this edifice may have been built on the spot of an earlier sacred site, as often happens with Christian encroachment. A more practical idea is that it may have served as a baptismal pool. In any event, here’s someone else puzzling over its function: 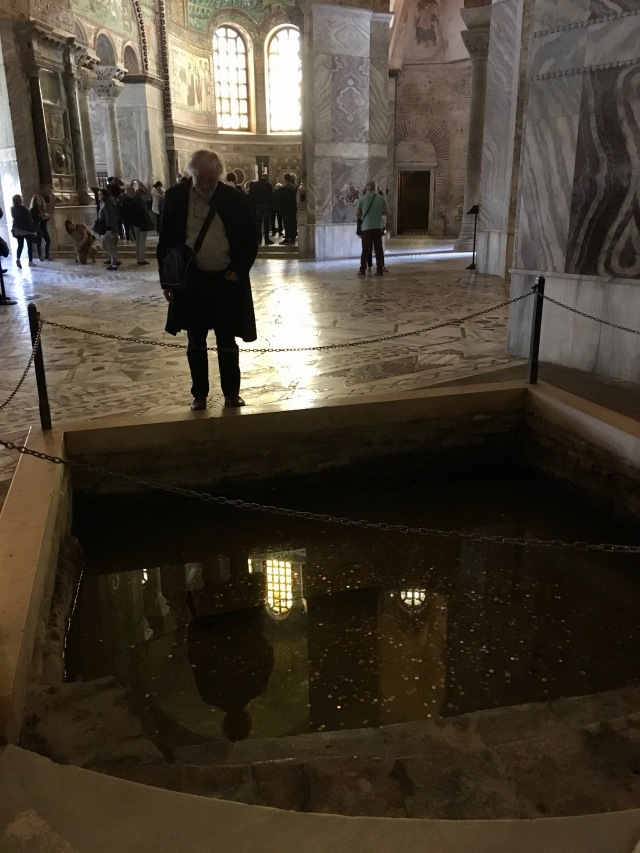 Ravenna has a charming center city that mostly consists of a couple piazzas and the streets that connect them to each other and to the monuments. Outside of that carefully preserved historical bubble, it’s a unprepossessing little burb with some truly unhappy architecture from the 1960s and 1970s salted amid the renaissance palaces. But if you stay on the path, it’s nothing but La Dolce Vita. Here’s the Piazza del Popoplo on a mild April day: 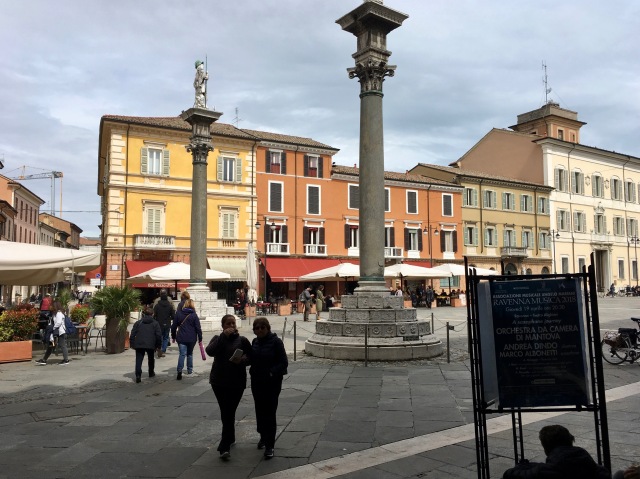 A short walk from here (see above on short walks), one finds Dante’s Tomb. Yes, that Dante. In exile from his hometown of Florence, Dante died in Ravenna in 1321. After a couple hundred years when tempers had finally subsided, the pope ordered the bones back to Florence but the wily Ravennians *sent an empty coffin,* Dante’s bones secretly hidden in a monastery for safekeeping. His remains only found the light of day again in 1865 or so during some renovations and now they are peacefully reposing on a quiet back street: 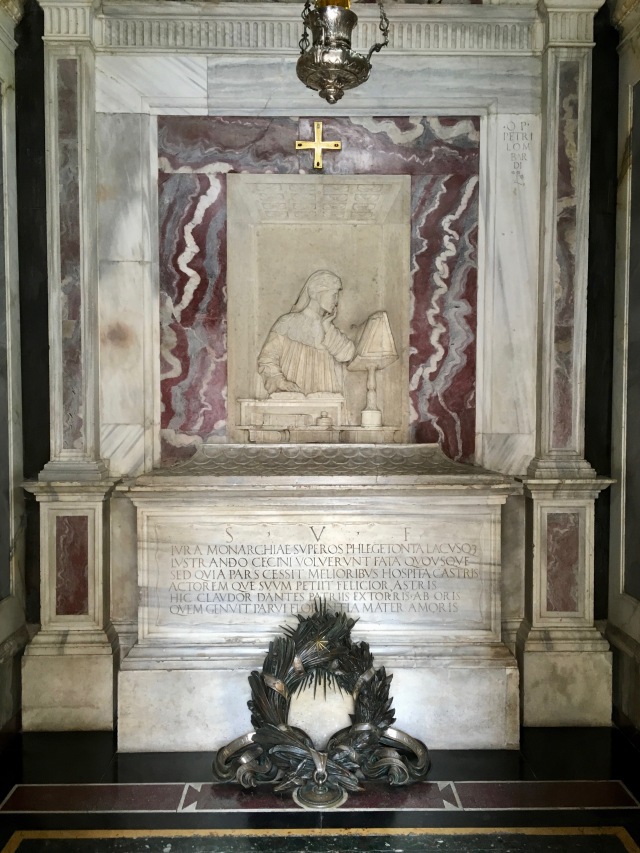 Speaking of tombs, the other biggie in Ravenna is the Mausoleum of Theoderic, located just outside the city. Now here’s an interesting dude that I had never heard of, but yowza talk about someone who lived at the crossroads of history and culture. Born in 454 in what is now eastern Austria near the Hungarian border, Theoderic was, according to Wiki, “king of the Ostrogoths (475–526), ruler of Italy (493–526), regent of the Visigoths (511–526), and a patrius of the Roman Empire.” Now that’s some resume. He died in Ravenna which had been his captial and was buried in the structure he had previously designed, but at some point his actual tomb itself was opened (the bathtub-like object below) and his bones scattered to the winds. Sic transit gloria mundi… 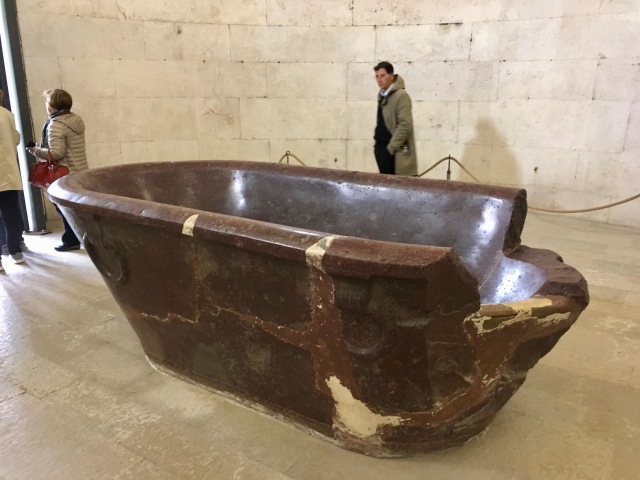 So Ravenna….significant for centuries as the site of a Roman seaport, a center for ecclesiastical Byzantine monuments, the capital of the Lombards, Dante’ home in exile, a province of Venice. Many famous writers have visited the city and fallen under her spell, including Oscar Wilde, Henry James, Lord Byron, Carl Jung, T.S. Eliot, J.R.R. Tolkien, and Hermann Hesse. Yet now she sits as if like Miss Havisham, dressed in the decaying gowns of yesteryear and waiting expectantly for another groom to come. In the meantime, Sister Immaculata prepares her youngsters for their First Holy Communion and the cycle of the year continues… 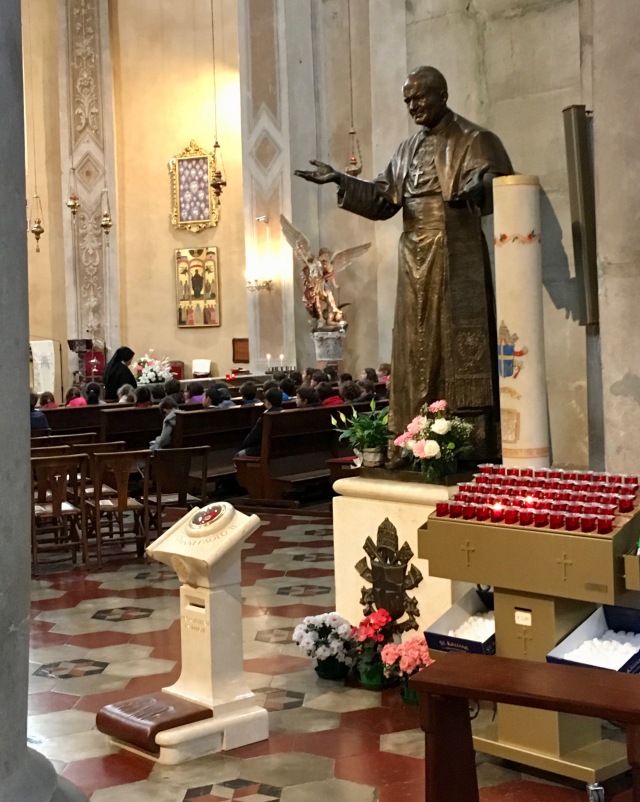 This entry was posted in Italy and tagged Ravenna. Bookmark the permalink.

7 Responses to Rambles in Ravenna