Hints of Heidelberg and Happy Trails

As some of you know, I spent a fair bit of my youth tucked away in rural southern California on the Mojave Desert. There’s a back story, of course, but what’s relevant here is that my little burg sported a museum completely dedicated to Roy Rogers and Dale Evans. For those of you too young to remember, Roy and  Dale were the stars of “The Roy Rogers Show,” a Western cowboy program that ran for nearly 20 years on radio and TV. The museum, housed in a former bowling alley, featured loads of memorabilia from the pair’s personal and professional histories. Most striking of all, for me at least, was the incarnation of Roy’s faithful horse, Trigger, professionally stuffed and rearing mightily over the foyer.

So what’s Trigger in a bowling alley got to do with Heidelberg, you might ask. And well you should. As I travel around Europe, especially as I visit cities that have been designated UNESCO World Heritage sites or have similar amazing historical centers, it seems to me that many of those places have sacrificed their civic vitality in return for….becoming a kind of cultural Disneyland. This is a longer topic, one I hope to explore in the future, but now after having seen, among others, Heidelberg, Lübeck, Bath, Avignon, Cesky Krumlov, Riga, and even Prague, literally turned into beautifully restored, maintained and illuminated…stages for selfies and curio shops for hordes of tourists, it does give me pause. The places have survived and apparently are thriving, but not as organic day-to-day centers for normal citizens but as highly curated “experiences” for paying guests (including me, I assume). More later on this.

Anyhoo, I headed to Heidelberg last week because the local chapter of Democrats Abroad was hosting the annual meeting of DA-Germany AND that gave me a chance to see a city I had hoped to visit for a long time. Upon my arrival, I headed to my hotel located in the heart of the Altstadt and chanced to see this very lovely night shot of the Heidelberger Schloss (Castle), initially constructed around the year 1300: 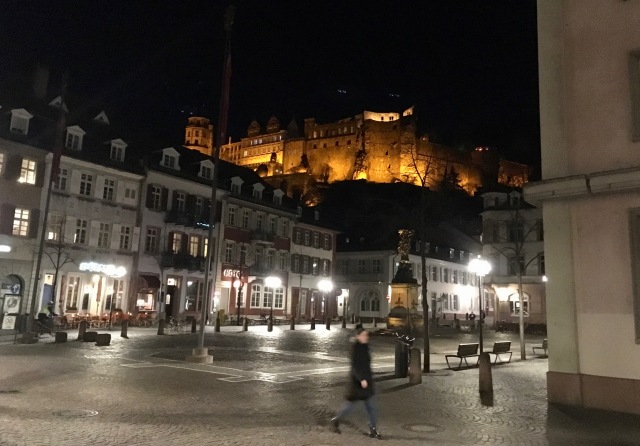 So, “stuffed city” or not, doesn’t that image just get you all fired up to explore the town and learn more about its history? Of course it does, and first thing the next morning, after a hearty breakfast, I set off to do just that.

Heidelberg has a ridiculously long and fascinating history. Some of the earliest evidence of human life in Europe, the jaw of “Heidelberg Man” from somewhere between 60,000-200,000 BCE, was found in the area, according to Wiki. Evidence of a Celtic fortress of refuge and worship dates from 500 BCE, the Romans had a fort in the area, the Byzantines wandered through, and the town as we currently know it dates pretty firmly from about 500 CE.  Although the area saw a lot of Catholic abbeys after its Christian conversion, Heidelberg actually became one of the most contested regions for the fierce fights between the Lutheran and Calvinists in the 15th and 16th centuries (Protestants in the ring, hard to picture.) The university is Germany’s oldest and the pedestrian walking street, now home to an excessive number of global brands, is Germany’s longest.

After a good deal of huffing and puffing (the funicular was not working due to routine maintenance), I found myself at the castle grounds with this lovely view of the Altstadt and the Neckar river: 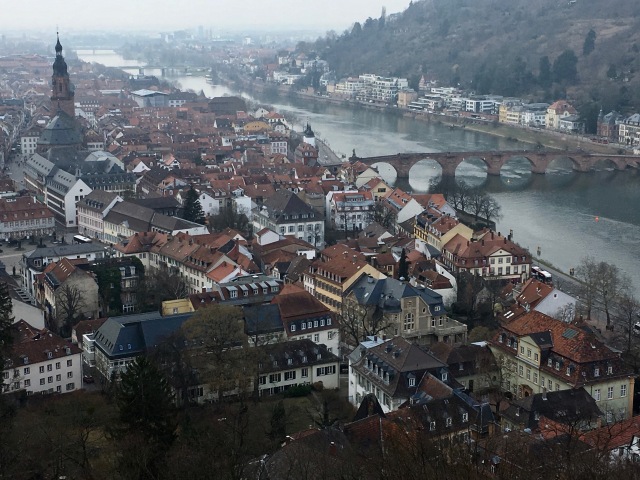 …and here’s a painting with a similar view, the “Hortus Palatinus und Heidelberger Schloss”  painted by Jacques Forquiere, a Flemish landscape painter, sometime before 1620. This garden, the first in the renaissance style north of the Alps and later lauded as “the eighth wonder of the world,” never quite achieved the goal of the painting, even though the engineer Salomon de Caus worked great wonders.

Back down at sea level, the view of the castle, a renaissance structure demolished in the 17th and 18th centuries and never totally rebuilt, still inspires: 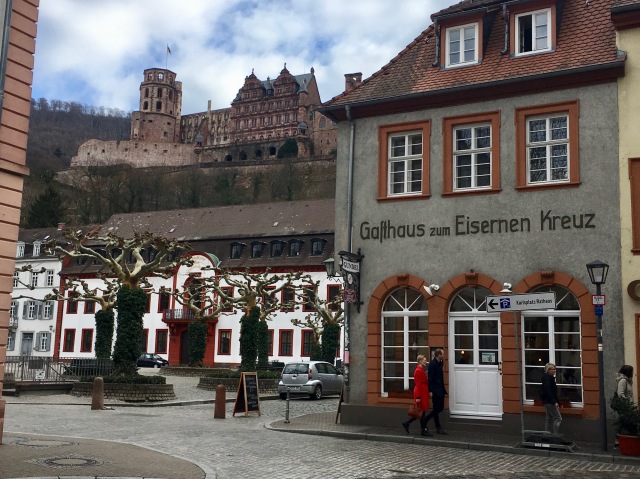 But then it was time to head off to Significant Local Venues. On my way to the historical museum, I literally stumbled (damn those cobblestone streets) into the Documentation and Cultural Centre for the German Sinti and Roma. As you may know, in addition to Jews and other discriminated groups, the Nazis also performed an extermination campaign against the Sinti and Roma peoples of Germany, known often and incorrectly as Gypsies. Opened in 1997, “the Centre sees itself as a museum for contemporary history and a site of historical remembrance.” Their task is “to document the 600-year-old history of the Sinti and Roma in Germany, focusing on the crimes of genocide perpetrated by the Nazis, crimes that have been repressed from public consciousness for decades now.”

As with all places of remembrance, this was not an easy place to visit. The front desk requested that no photographs be taken, so I have to content myself with showing you the sign at the entrance to the building. It was a moving experience, a reminder, yet again, of the price of intolerance.

…and speaking of Holocaust and assorted themes, here’s a shot of the old Heidelberg Synagogue (or what’s left of it – the white lines indicate the walls of the original building) following the events of November, 1938:

Okay, respect paid, keep going. The local historical museum offered this fascinating insight into the amusements of the rich and famous. Here is a portrait of Perkeo (an abbreviation of “Perche no? for the Salerno-born Clemens Pankert), the dwarf-jester in charge of the largest wine barrel in the world, the Great Heidelberg Tun (Grosses Fass), located in the basement of the castle. Weren’t you supposed to see a pink *elephant* with that much juice?

Assssk and ye shall receive…

According to legend, Perkeo lived happily into his eighties “drinking only wine when one day he got ill and the town doctor had him drink water. He died the next day.” Jus’ saying. Watch out, TW…

Heading back to my hotel, I ran into perhaps the most hopeful sign of any I saw on this trip – a march and protest for  “Fridays for the Future.” Every Friday, many European school children of all ages leave their classes and protest for action against climate change. Bless their hearts – and lord give them strength and patience for the fight: 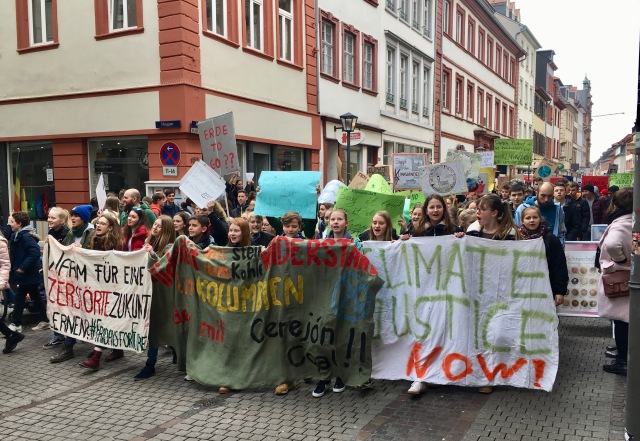 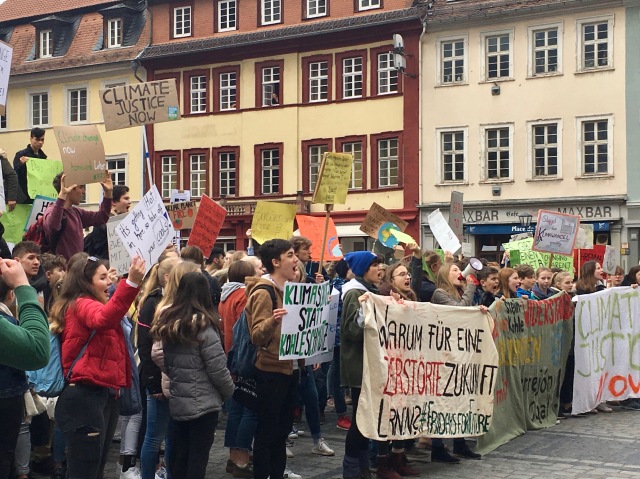 I’m going to try to find out where they march and protest in Berlin – the least I can do is go and clap like hell. Maybe they’ll even let me march as well.

Okay, so I really was supposed to be in Heidelberg for the Dems Abroad Annual meeting. I made it, at least for a few hours. Here’s a shot of Sherry, a pistol if ever there were one, making a pitch for her ERA buttons. No kidding, it really is a disgrace that the ERA didn’t pass in Virginia – the damn thing was ratified nationally *100 years ago,* but we’re still fighting in the states. C’mon now, y’all; let’s get this done. 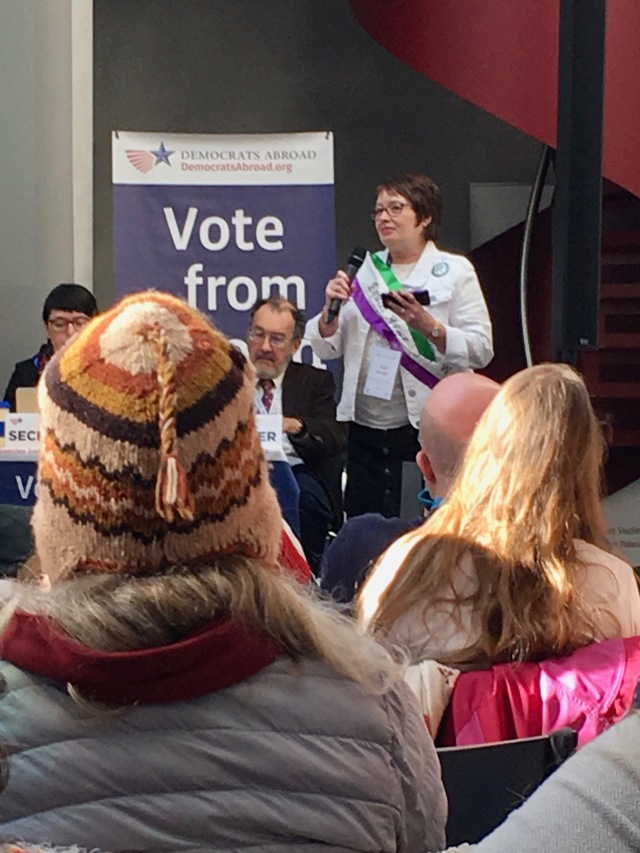 …and then on my way to the train station after the final gavel fell, what the dickens did I see – but a very interesting Tee-shirt store. I think this message  may actually have had merit – but only up and until the Brexit vote, when our British brethren drank the same damn Koolaid that infected our recent national election. Interesting to consider nonetheless – maybe this is Europe’s actual perspective… 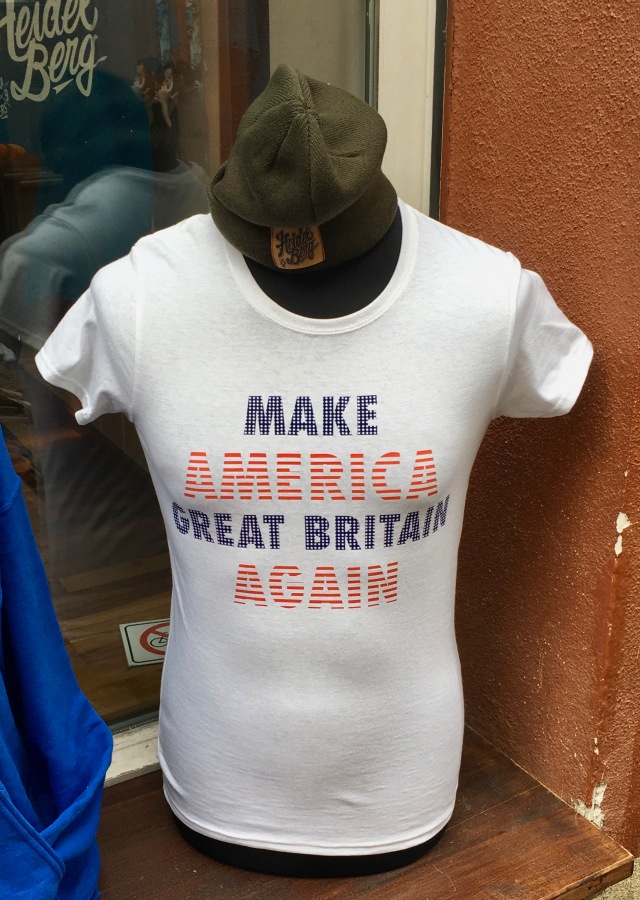 So there you have a snippet of Heidelberg, and as I head to Bamberg and another fossilized Altstadt and World Heritage site, I leave you with a bit of Roy and Dale. Extra points if you remember the melody:

This entry was posted in Germany, Uncategorized and tagged Heidelberg. Bookmark the permalink.

2 Responses to Hints of Heidelberg and Happy Trails