Goldilocks and the two minibuses…

Now, in all honesty, this blog should be about the start of the summer term at IUJ – specifically about the delightful new students who are assembling here, getting oriented, and preparing to enter our classes on Wednesday. There’s been a lot of activity around here of late aimed at just that, including the fact that I’ll be spending much of my evening scoring placement exams, but what I really want to do is talk about minibuses, because in my limited experience, they can tell you a heck of a lot about the culture in which you find yourself.

But the particular reason this has caught my attention at the moment is because minibuses here are run in ways that are 180 degrees diametrically opposed to the way minibuses operated in my last long-term overseas assignment, Georgia. So let’s take a closer look. (Or, of course, you can also just turn the page if this particular musing doesn’t catch your fancy.)

In Georgia, as in much of the former Soviet Union, one of the most popular forms of public transport is the “marshrutka,” or, in Georgian pronunciation, “marshutka”. (One friend, who had to spend extended periods of time in them, coined the term “marshitka,” but fortunately I didn’t have his travel schedule.) The name basically means “routed taxi,” and they will run along a predetermined routes and (here’s the key point) will *stop any time anyone either inside or outside the vehicle wishes.* There is no fixed timetable, but since they run frequently along popular routes, there’s no worry of missing one, at least in town. Occasional diversions also occur in specific instances, but that’s just part of the fun.

On longer hauls, at least in Georgia, there are specific marshutka meeting points in town where buses have destination names in their windows and then sit and wait for passengers. Here’s another key point. The marshutka will wait *until the seats are filled* before it takes off on a long haul. This means if you want to go from Place A to Place B, you could leave at 8:00 a.m, 12:00 noon, or 8:00 p.m. You just don’t know. Once on the road, though, that’s when things get really interesting. I’m going to quote from my friend Chip’s recent blog entry from Ukraine, but this is extendable to most places:

“The two and a half hour ride to Kamyanets-Podilsky was spent watching the driver drive with one hand, talk on the cell phone with the other, and somehow make change for fares from the wads of cash jammed into the air conditioning vents on the dashboard.” This gets even more complicated in Georgia as Eurotrash music is usually blaring on the stereo, the men are chain-smoking to beat the band, and the ever-present wine bottle makes a welcome appearance at some point in the proceedings, often liberally shared with one and all, including the driver: 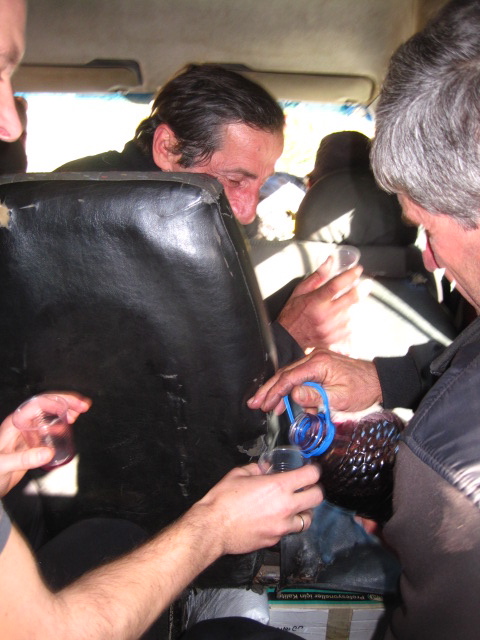 Okay. So you got the general drift.

This is one of the IUJ minibuses which (thankfully) has several routes around the surrounding environs in order to connect us with the outside world, more specifically, the train station, the hospital, and the local supermarkets. Here is the weekly schedule: 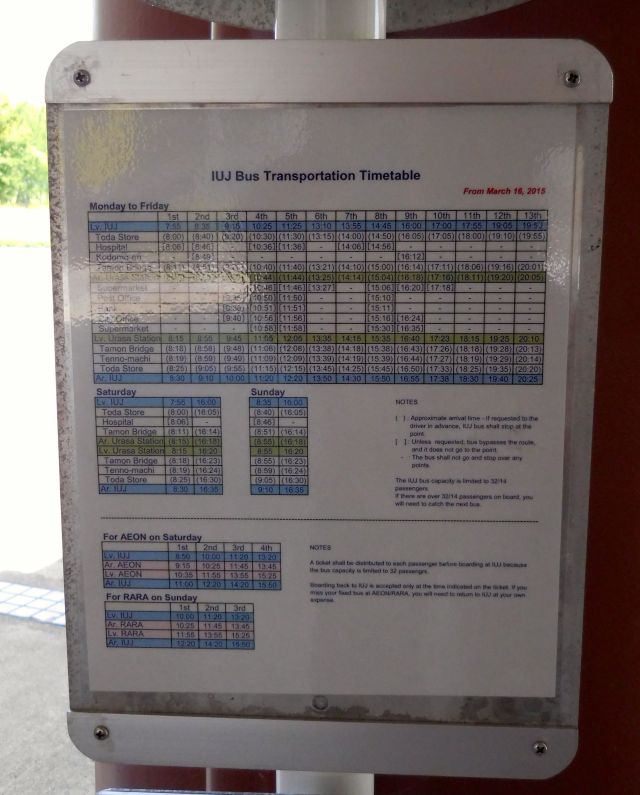 Pay particular attention to the time chart at the bottom of the page for RARA (pronounced LALA) on Sunday. (This is serious stuff.) If you can make out the times and the direction of travel, you can see that on Sunday, the bus leaves IUJ at 10:00 am, drops off the first crew at the store, returns, picks up the second crew, goes back to the store, drops crew #2, picks up crew #1, returns to school, drops off crew #1, picks up crew #3, goes to store, picks up crew #2, goes to school, drops off crew #2, and then goes back to the store for crew #3. This is all done *by one driver.* And in order to be any part of this carefully choreographed transport dance…you must have a ticket:

Being that I simply can’t get enough of Japanese grocery stores these days (more on that later, I hope, although taking pictures of food items in front of normal shoppers makes me a little uncomfortable), I was up for the drive to RARA and boarded the bus appropriately both ways.  If you miss it, even by a minute, the return is your nickel, and this is a 25-minute ride, serious business for the happy taxi who gets your call. Safely on board, I took a few shots of the countryside, chosen only for the fact that I could steady the camera at stop signs:

Lovely countryside complete with, you guessed it, “lice’

So when we got back to campus, there were two stops, one at each of the student dorms. When I failed to get off at the second stop (foolishly assuming that I could return to base, the location closest to my residence), the repeated Japanese words and somewhat annoyed vocal tone of the driver suggested that a long walk with my groceries was probably the most diplomatic option at that time. So off I went and off I went. Lesson learned.

This entry was posted in Japan, Uncategorized and tagged IUJ. Bookmark the permalink.

1 Response to Goldilocks and the two minibuses…