Art and Life in Potsdam

There are a lot of really good reasons to visit Potsdam, a city in its own right 24 km/15 miles southwest of Berlin. Designed using Age of Enlightenment ideals, it was intended to convey “a picturesque, pastoral dream” to remind its residents of their relationship with nature and reason. It was a center of immigration during the 17th century due to the Edict of Potsdam; Frederick the Great built his Sanssouci Palace there in the 18th century, playing his flute with other musicians to relieve the pressures of governing. It became a provincial capital of the state of Brandenburg in the 19th century, and in the 20th it hosted the Potsdam conference where the future of Europe was decided, later housing the East German intelligence apparatus and the “Bridge of Spies.”

As with many German cities, Potsdam was heavily bombed during the second World War, and as with many East German cities, the rebuilding was slow and in many cases downright ugly from 1945-1990. But with reunification, as in Dresden and with the new Schloss in Berlin, there is a concerted effort to reconstruct the original appearance of the historic city, as much as possible, public transportation notwithstanding. Here’s a shot of the Old Market Square with the reconstructed St. Nicholas Church (St. Nikolaikirche) on the right, some other recent renovations on the left, and an “Eeewwwwwww!” example of mid-century urban modernity in the middle:

In order to take this shot, I was standing on the upper floor of the Museum Barberini, the reason for my visit that afternoon. Now an art museum, it was rebuilt on the site of the original Barberini Palace which had stood there since 1772, itself built on the model of the Palazzo Barberini in Rome, erected in the 1600s. The modern reconstruction (2016) is the work of Hasso Plattner, founder of the SAP software enterprise, to exhibit his personal collection of art from the former GDR (I didn’t know this at the time) as well as special exhibitions of other works. I was there to see the highly vaunted initial opening exhibition “Impressionism: The Art of Landscape.” Here’s the front of the Museum Barberini, the building in the middle with the dark arches, showing recent and continuing reconstruction around it: 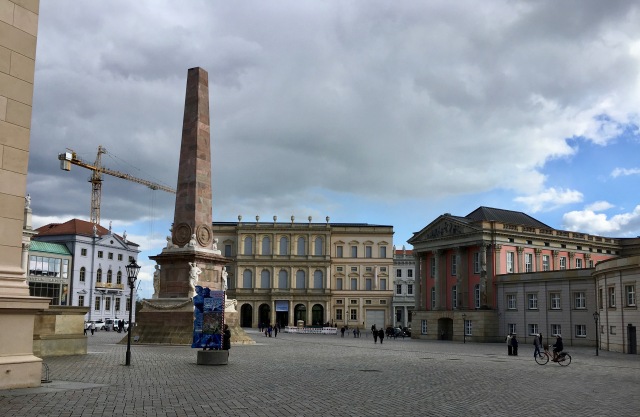 Embarrassing confession. I thought I liked Impressionism. I thought I downright loved it. But, surrounded by *a lot of fuzzy pictures with water and trees and bridges all painted in roughly the same colors, I got downright bored. (Sharing the moment with hundreds of my new best friends all milling around semi-aimlessly shooting pictures with their mobiles in stuffy galleries didn’t help either.) But I had spent a fair sum and come a fair distance. What to do? Here’s a shot of one of the main exhibit halls that afternoon, giving you a sense of the congestion and my dilemma:

Hard to see the forest for the trees

I took another look at my Floor Plan and noticed that there were some non-Impressionist galleries on the ground floor. Relief! Down I went for a little space and air…to discover…

“Hmmmmm,” sez I. “Now *this* looks intriguing….and better yet, NO PEOPLE! Score!

There was no official state art in the former East Germany; rather it was supposed to have a political function, according to the exhibit. But of course, artists, being artists, are usually not the best when it comes following the rules and doing what they are told. And it appears as if the collector recognized that fact and set out deliberately to find the work of those who dared to share their experience and vision through the lens of the time and place. There is going to be a major exhibit of these works in the fall; the rooms I saw were just teasers, and I’ll certainly be back for the main event.

Back story: As I have traveled around Europe and European art museums for the past couple years, I have become increasingly fascinated with how artists responded to the events of the 20th century in their works. A retrospective for the last ~100 years includes the beauty of turn-of-the-century impressionism; the gritty semi-realism of the First World War; the Art Deco optimism of the 20’s; the increasing ominous abstract expressionism  of the 30’s and 40’s; and finally postwar and up through the early 1990s, some very difficult and painful works (not even sure what to call them) trying to make some sense of the destruction, chaos, and oppression that followed 1945. I have seen these themes in art museums in Germany, Hungary, and Lithuania, a strong suggestion that the stress of the times had a direct impact on the artists’ work. Interestingly, those themes (and that pain) are less evident in Scandinavian art; somehow those artists appeared to spend less time in the crucible, as it were. Please don’t take this as gospel; just my observations.

From the accompanying material: “The striding figure features politically conflicting gestures, with the right hand extended in the Hitler salute and the left hand balled in the proletarian fist…..a warning against the seductiveness and conformism in every kind of dictatorship.”

A little less strident in theme and execution but equally intriguing to my eye is entitled “Rainy Day in the Studio” (1987) by Harald Metzkes (1929-2004):

According to the accompanying information, “…the studio is a refuge from the inclemency of the rainy outside world. It therefore becomes a symbolic interior space, a stage for the artist’s inner world.”  A place to dream, to create, to envision new worlds to come?

I failed to get the name of this next work, so charmed was I by the vision of the couple immersed in its dark beauty:

Obviously I really enjoyed this exhibit and it rescued the afternoon and the admission fee for me. But even the most compelling of art can become satiating after a spell, and since it was a sunny afternoon, I headed out of the museum in the direction of the Dutch Quarter of Potsdam, the Holländisches Viertel, a neighborhood built in the 1730s to lure Dutch craftsmen to the city by providing them with housing that looked…just the way things did back in Rotterdam. (There is a Russian colony as well, built to house Russian singers, but it s further out of town.) With its 169 buildings, the Holländisches Viertel is the largest collection of Dutch architecture outside of the Netherlands:

Not a tulip in sight, alas, but plenty of boutiques and cafes

Nearby, plastered on a window on an obviously student-used building, I saw this sign:

How appropriate, I thought, that a city that has been a center of tolerance and diversity for nearly 500 years is still reaching out to those who both need the hand and who will, in time, contribute back to that society as well. Nice to know there’s a place that supports dreamers.

I had been searching in the Holländisches Viertel for a place that served amazing hot chocolate, recommended to me by local friends. Alas, several turns up and down the picturesque streets failed to find it (or if I found it, I didn’t recognize it), but instead I was cheered by this bit of Easter swag, a nearly meter high (one yard) purple bunny that helped get me in the mood for the chickies and duckies arriving this Sunday:

So on that note, to you my dear readers, let me say “Frohe Ostern!” May your baskets all be full and you eggs all be gaily painted.

This entry was posted in Germany, Uncategorized and tagged Potsdam. Bookmark the permalink.

1 Response to Art and Life in Potsdam