Seeing this title you might think that my European peregrinations of the past several years might have had something to do with my personal life, a subject that has been noticeably absent in my blog content. But the fact that I even have a personal life to discuss at this point is actually as a *result* of those travels, a nearly incredible coincidence of timing, opportunity, and a strong personal interest in of all things…fountain pens. And the result is that I have just married an amazing man and we have made this happen in a most amazing way.

T is German, but he lives in Italy. I am, of course, American, currently resident in…Berlin. When we began discussing matrimony, we quickly learned that the bureaucratic requirements in both Italy and Germany were substantial and both countries upped the ante considerably when multiple nationalities were involved. But I’m a pretty clever little monkey when it comes to online research, and during my electronic rambles I stumbled onto a very interesting fact, and that is that Denmark, bless its practical and tolerant little heart, is literally the “Las Vegas” of Europe.

And I’m not talking casinos and pink flamingos here. What I mean is that Denmark makes it easy to “tie the knot” for people from just about anywhere to people from just about anywhere (folks from Laos, I’m told, have had difficulty). You can do it yourself or you can hire the assistance of an agency that specializes in this area; we were fortunate to receive the tender mercies of Samantha at gettingmarriedindenmark.com. In short, all you need to prove is that 1.) you are alive and legal (passport and residency); 2.) you are over 18 (or under with parental consent) and and 3.) your former spouse, if you had one, is either deceased or divorced. That’s it. Full stop. The kicker is, of course, that you have to *go to Denmark* from wherever you are. Once in that happy land, there are several locations one can choose, and for a number of reasons, we picked the little island of Ærø, and it turns out *a lot* of other people do as well.

Ærø is a small island lying between Denmark and Germany, some 20 kilometers long and maybe three wide, with around 6500 souls in residence and three little towns. You can get there by way of three ferries. The village of “Ærøskøbing, with its narrow lanes and picturesque 18th-century houses was historically Ærø’s chief town,” and is currently THE spot for….the nearly 4000 couples (yes, 4000 couples) who will be united in matrimony there this year alone, according to the local authorities. 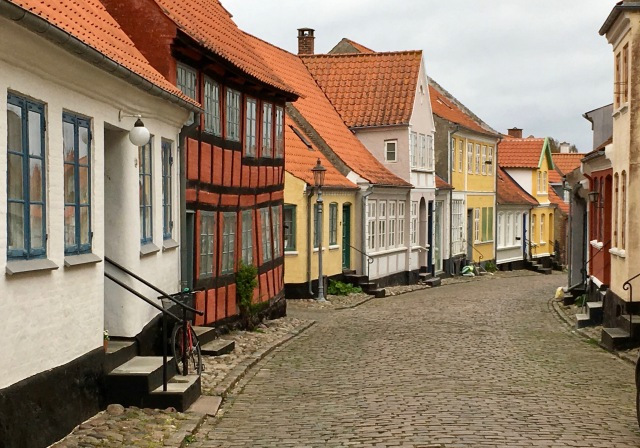 This is how it works. You arrive on the island on one day, present your papers to the wedding office, and receive a time for the following day when your ceremony will occur. This requires that you spend at least one overnight on the island, with the resulting monies improving the local economy. The concept itself was the brainchild of the current mayor, an outgoing and enterprising soul if ever there were one, who came up with this idea as a way to radically extend the shoulder season of a holiday island that’s really only appealing for six weeks in the summer.

We were slightly dismayed to learn that the municipal office complex was considerably less visually compelling than the rest of the town, but sic transit gloria mundi: 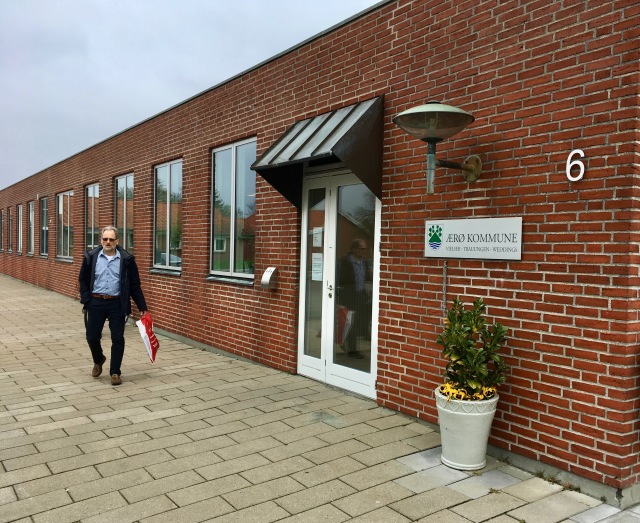 As you walk into the building, you are greeted by the comforting faces of Denmark’s reigning monarch and her consort, Margrete and Henrik, themselves a bi-national couple (Danish and French) and a bit of a scandal in their day: 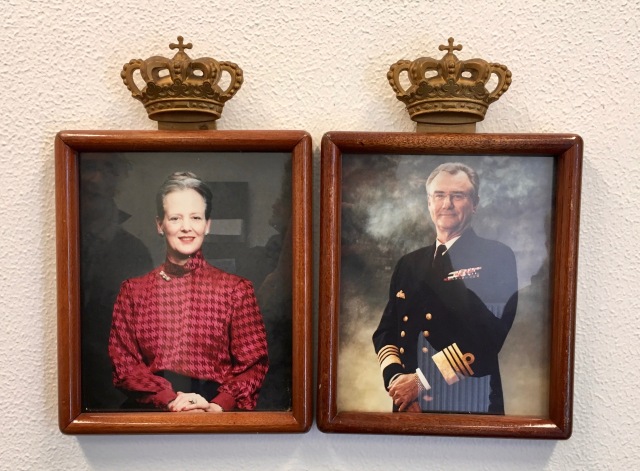 Once inside, there is a very friendly and efficient office crew that has processed your documents and can affirm all the things that need to be affirmed: 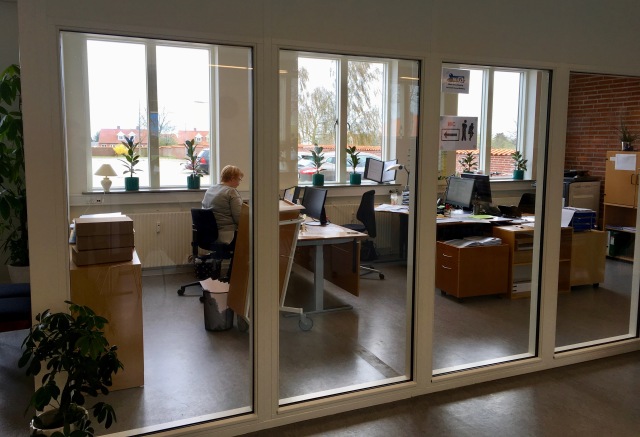 But here’s where the story gets much, much more interesting. Through those doors and into this office walk some extremely diverse couples and and no doubt equally intriguing stories. Although we were only there a short period of time, we saw…a German woman in hijab marrying a Tunisian man in tuxedo accompanied by her weeping mother; an African woman with her German groom, complete with her two African children and one blended child, all decked out in full white and sparkled splendor; a young Asian woman in a ballet tutu marrying her Anglo groom; a group of Turks from Berlin where it wasn’t at all clear who was marrying whom, and several other less dramatic couples, including ourselves together with three of T’s relatives who were adventurous enough to come along for the ride. The authorities told us they would marry 24 couples in the office that day, with eight other weddings taking place around the island on this chilly rainy April Friday. 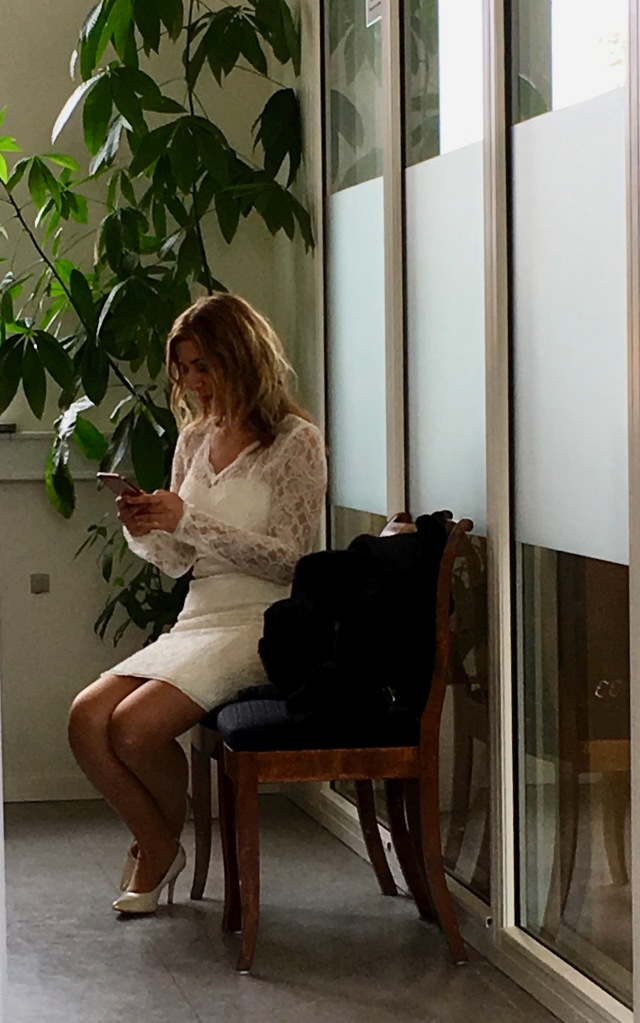 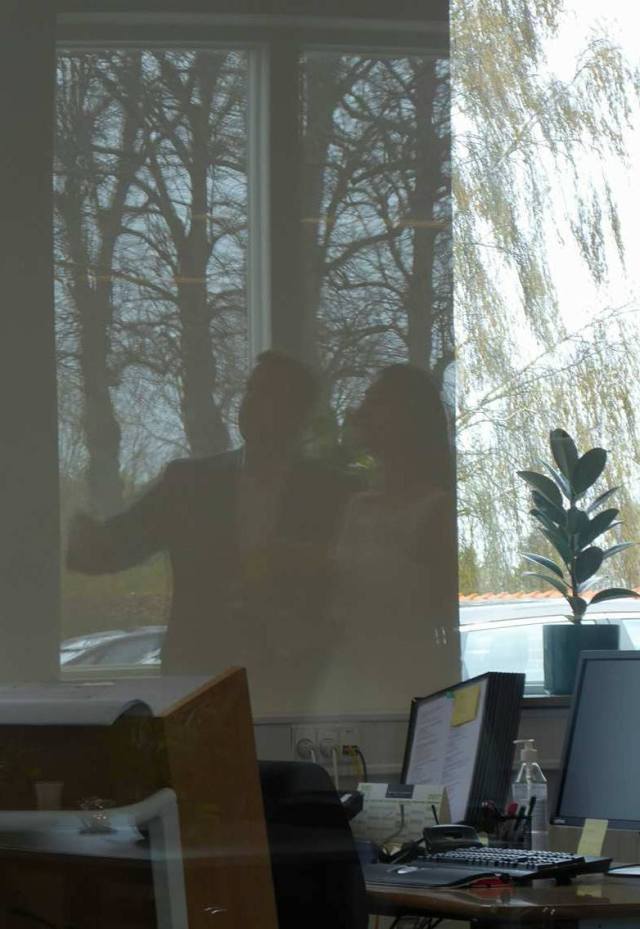 Well, this is all well and good, you say, but where’s the story about you, Carla?

After this somewhat common-place waiting room, I was concerned that the service itself would feel like a car wash or an automat, but in this I was delightfully surprised. Once inside the wedding room itself, we were greeted by a lovely judge and two “hostesses” (they doubled as the witnesses) and a gracious interior with rugs and paintings. The judge herself was quite charmingly surprised that she was actually marrying an American…with a strong Danish name and a family history in the area. She offered the ceremony in three languages, and we chose English. The words were few but very thoughtful and sincerely presented (and received). As non-Danes, we weren’t permitted a religious ceremony even if we wanted (which we didn’t), but the judge wore a gold cross, so maybe the big guy was there “in spirit,” as it were. Here’s proof positive that I have been taken off the shelf again (thanks, Wilson), with T’s brother and his wife, left, in attendance. His niece took the shot: 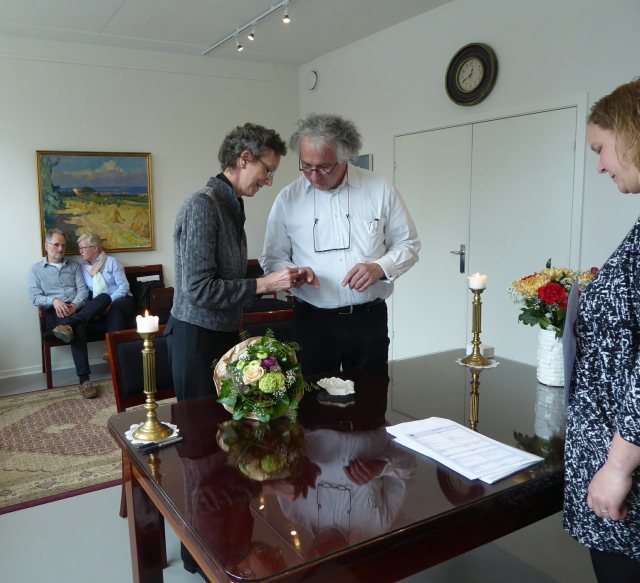 Still quivering a bit, we were offered a quick toast of wine or lemonade and a warm congratulations from all present. Soon after, wedding certificates in hand, we passed back through the doors and out into our new life: 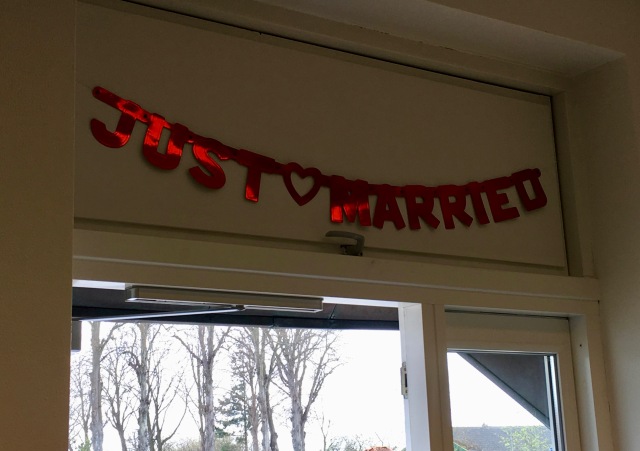 Since T and I are minimalists when it comes to all this kind of thing, you’ll probably guess that we didn’t hire a photographer but went with the DIY wedding selfie. Here we are in our hotel room with the lovely bouquet that one of T’s customers sent along to us: 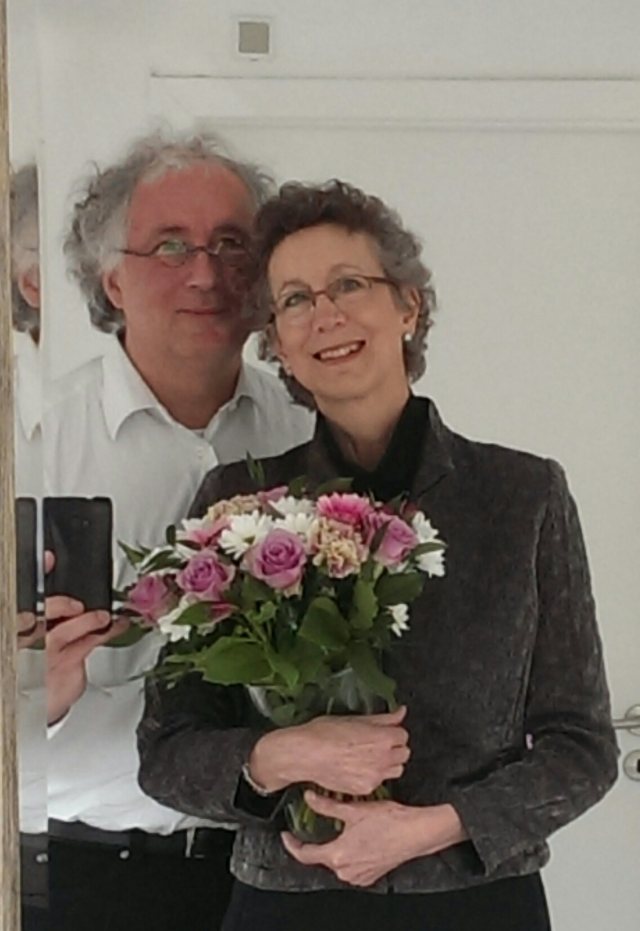 T’s family spent the day with us, enjoying local offerings both inside and out. But we waved them off on the late afternoon ferry and came back for a quiet evening alone, our first in quite a while, thanks to T’s amazing network of friends and family. We were not disappointed in the gustatory offerings of one of Ærø’s charming dinner spots: 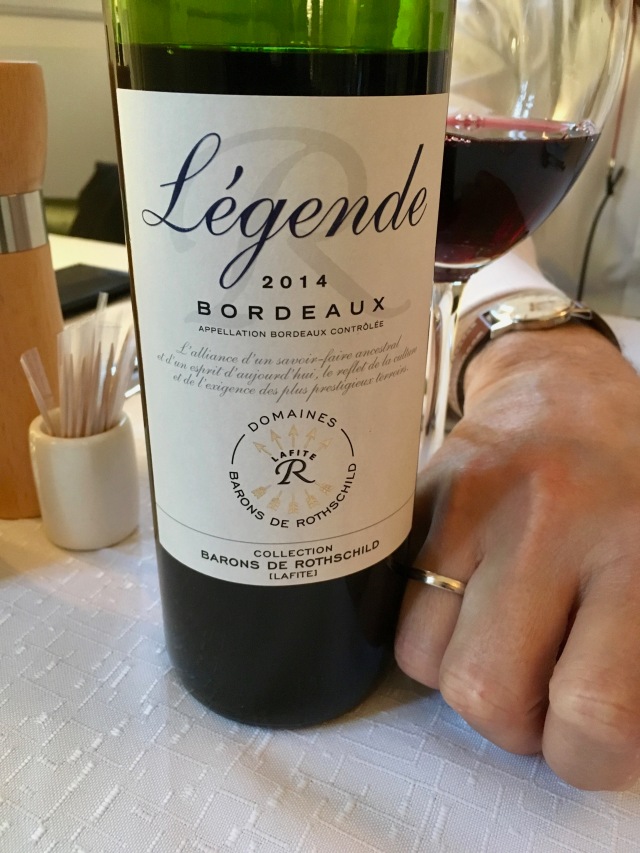 May I say here and now that I am most grateful for this astonishing period in my life and the opportunity to pursue my lifelong dreams of travel, teaching, and writing overseas. The addition of T is a kind of dream-like miracle, and one from which I hope I never awake. The world may be writhing around me but I have found, in this moment, a very special place. And I plan to make the most of it. Skål!

This entry was posted in Denmark, Uncategorized and tagged Aeroe. Bookmark the permalink.

16 Responses to My small Danish wedding