I’ve moved a lot in my life – 32 times, or thereabouts. This is literally three times the average for most Americans, of whom (according to the latest Census data) 11.6 percent moved house in 2017, the lowest percentage since the data has been kept. Europeans tend to move far less than that, and while I don’t have the exact numbers, I’m relatively certain this is true. I always wondered why – were they not curious about other cities and towns? Didn’t jobs or relationships drag them hither and yon? Did they have stronger ties to their hometowns than those of us in the Western Hemisphere?

…and now I have, at least, a partial answer to this question. It’s just a heck of a lot of work, more so than in the US. See explanation below…

As noted before, T and I have thankfully landed a flat in Berlin, which in the current real estate climate is somewhat of a miracle and for which we are very very grateful. (This of course means that we are contributing to the increasing prices and decreasing affordable housing for the rest of the population, but there you go.) One cynical graffiti artist put it this way: 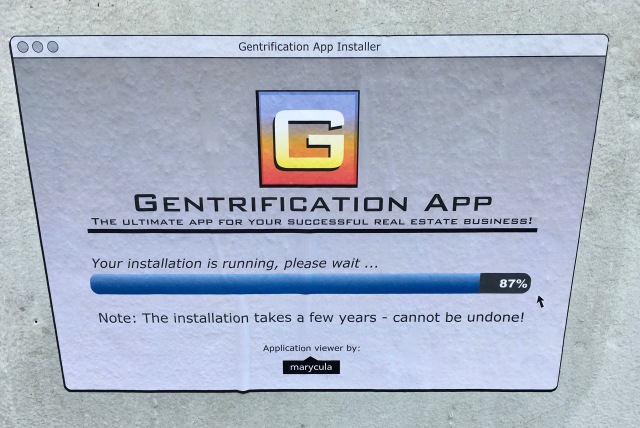 Our flat is located in Charlottenburg, a “locality” quite close to the center of the city and filled with amazing architecture and even its own Schloss (castle) which transforms itself into one of my favorite Christmas markets. We’re in a slightly less aesthetically pleasing edifice than some of the “Altbau” (old buildings) that resemble something out of Paris and grace many local streets, but one which is (to its credit) amazingly well situated to shopping and public transportation, somewhere in this general vicinity: 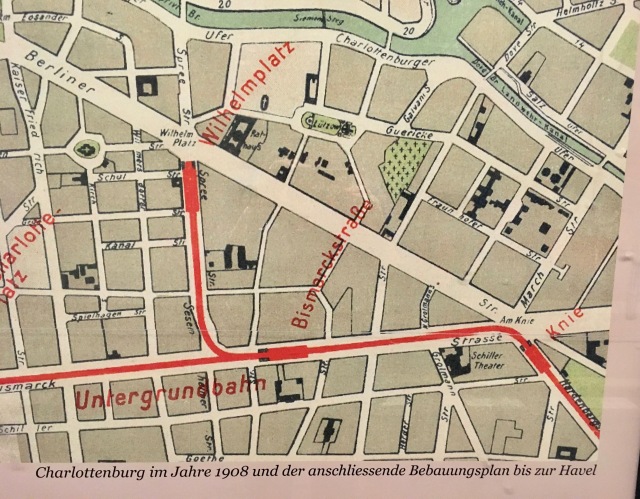 So, so far so good. We took possession of the flat in August and had the walk-through with the management company (the all-important “Hausverwaltung”), which is when I learned that German flats come with…..practically absolutely nothing. Four walls in every room, full stop. Now, we were lucky that our flat had functioning bathrooms, but that was it. No….kitchen, closets, toilet paper holders, cupboards, shelves, washing machine, curtains, you name it. Nada. All to be left to the discretion, imagination, creation, and wallet of the new tenants. There’s a brisk market on eBay in…used kitchens. How weird is that?

Okay, then. Since I have spent much of the past seven years getting rid of stuff and T still maintains the place in Italy, it means we are starting from scratch with this nest, sort of the way you buy new stuff for your kid heading off to college. Our new best friends are now the good people that work at Bauhaus, a German version of Home Depot or Lowe’s. There’s a small but very functional “filiale,” or branch, a couple blocks away. My day is not complete if I don’t stop by for something (or maybe just lunch next door): 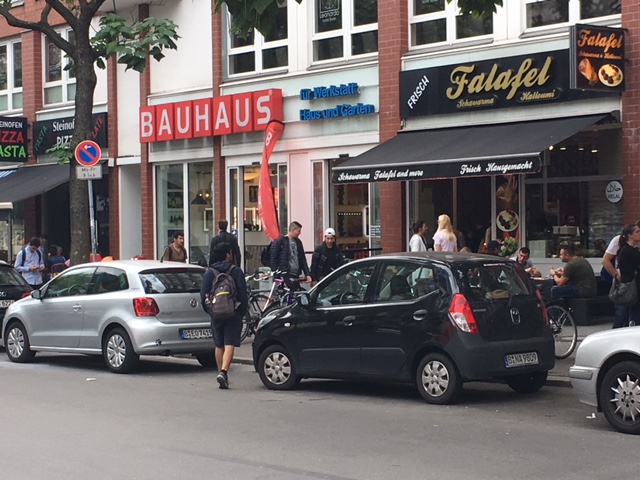 Home away from home

So when a kitchen starts with four walls, a radiator, and a couple pipes sticking out of the wall, you have a couple ways to go. There’s the “Pay a lot of money and have someone else do it” approach – very tempting, I might admit, or there’s the “Let’s just go minimal and let it emerge over time” approach, which is what we’ve voted to do. Happily, T’s brother is a carpenter, so probably we’ll end up with something very fine at some point, but in the meantime, we’re batching it a bit. Here’s the beginnings of a kitchen starting to take shape: 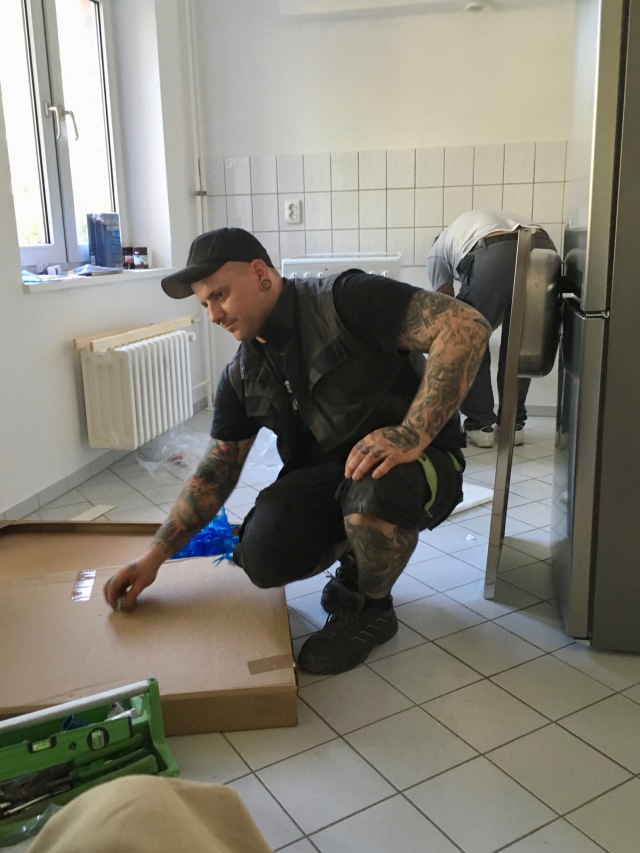 When these gentlemen left, we had, courtesy of our landlord who had forgotten he had promised this, a *basic* sink and stove. We bought the fridge (first purchase) and T added some shelves, so we’re in business in the short run. There have also been a few great contributions from friends, including these two stools who have cross-trained to become bedside tables: 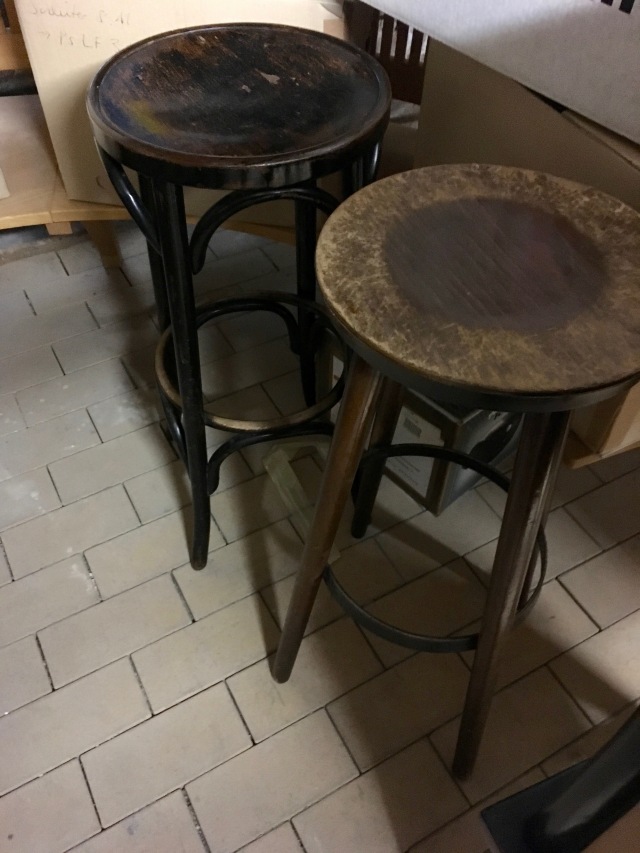 Part of the fun of assembling a flat here, of course, is that you can take advantage of all the amazing flea markets and antique stores in the greater Berlin environs, places T and I go regularly in our search for pens and such. Here’s a shot of T fully engaged in his hunting-gathering element: 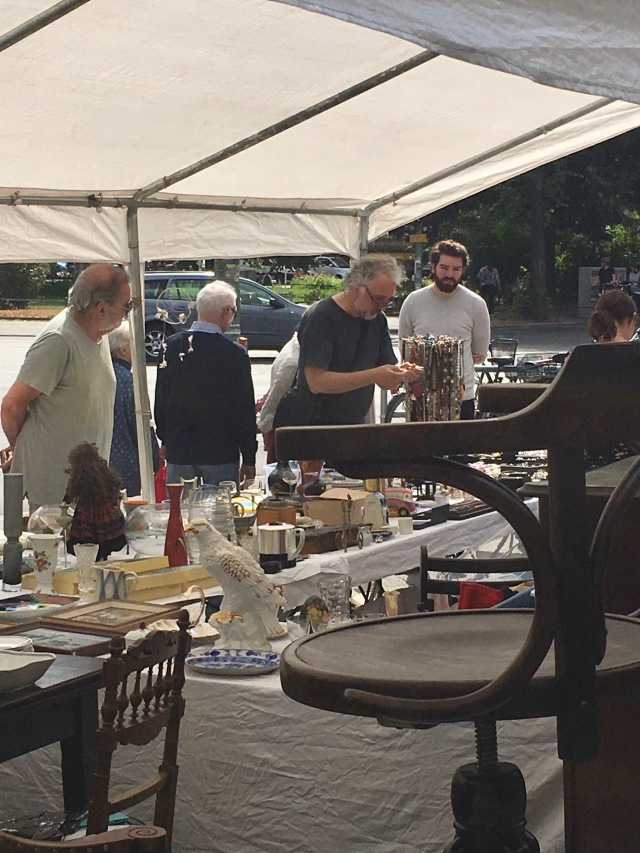 …and oh, the overwhelming possibilities for home decor….I vacillate regularly between fascination at all the amazing items available from decades of European craft…and wistful reflection and sadness that the inheritors of all this richness were, for some reason or another, unable to hang on to it. There’s also the realization that lives are far different now then they were not that long ago – porcelain, glass, and silver are no long the necessary accoutrements of middle-class life as they had been in the past: 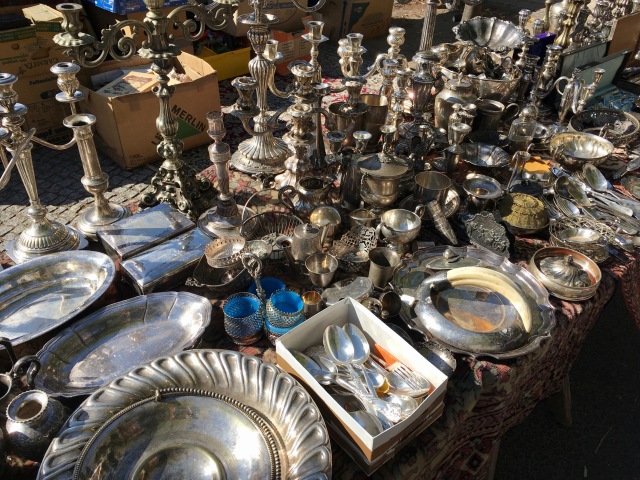 But nesting challenges aside, it’s simply grand to be actually living in this vibrant, diverse, and whimsical city, a place I have loved since my first visit in December 2014. There is a lovely farmer’s market a few blocks away every Wednesday and Saturday, for example, filled with a variety of local delicacies but also a very amusing stand where the egg salesman sets up an electric train — and a bunch of stuffed chickens — to help attract buyers to his stand:

…and in one of the many local grocery stores, one is invited to purchase sausage from a range of local purveyors, a sight that T and I quickly dubbed “The Wall o’ Wurst:” 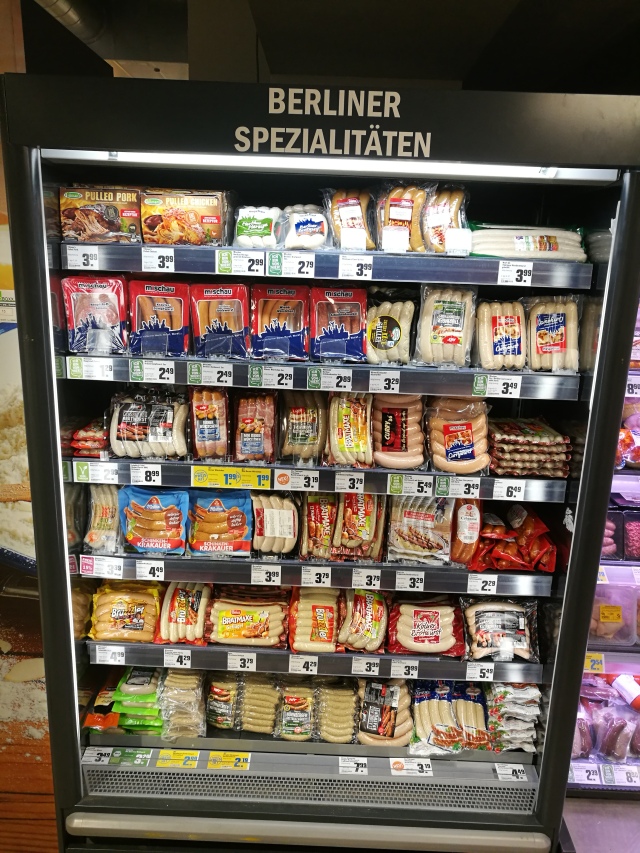 …and finally, no story about Berlin is complete with some of the local urban art, an exhibit of which has suddenly manifested itself on a construction wall nearby. Not exactly sure what a robed man is doing with a snake-like hookah, but that’s just part of the charm. 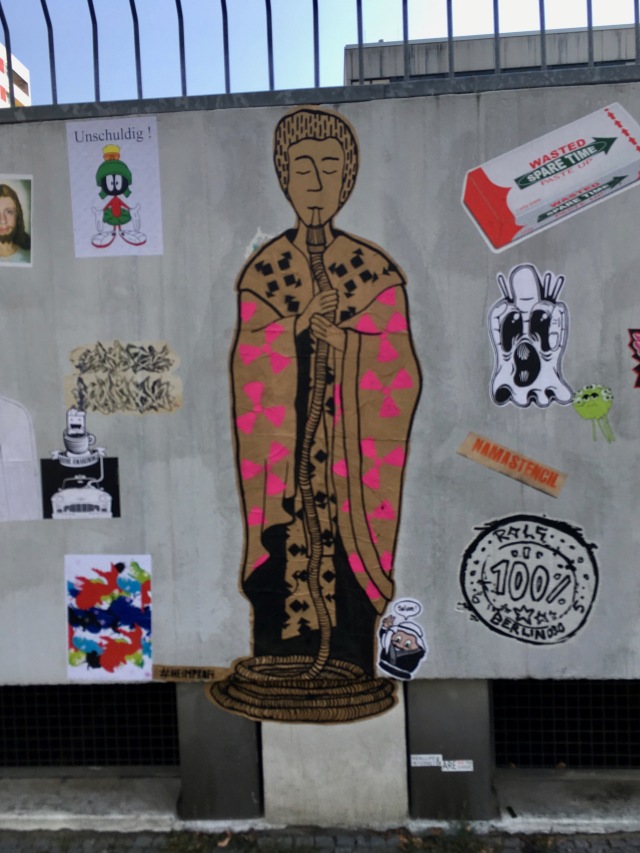 So, to all my fans who have requested pictures from the new place, the bad news is…that will just have to wait a bit until the rooms are street-legal ready to be shown off. I will confirm that there is a bed in place (thank god; only three trips to IKEA so far), there is a desk for my general sanity and continuing German studies, and there is the beginning of a workshop so T can do basic repairs and mailings. *And there is a guest room, ready and waiting for the first intrepid soul to come a’visiting.* When that happy day arrives, there will be something cozy waiting for you as well. Wish us luck on all the rest. I’ll keep you posted.

This entry was posted in Berlin. Bookmark the permalink.