So now I’m clueing you into my new travel dilemma. (And aren’t I the lucky one to have this at the top of my list?) I’m looking to find and explore cities in Europe that 1.) are not tourist Disneylands filled with cheap international chain stores and hordes of tourists carrying selfie sticks and eating in restaurants with English menus or 2.) zombie towns that have been painstaking restored but which haven’t found their new life yet and sit in ornate and reconstituted splendor with only the cats for company. No, I want to find cities, real places, small and large, who are still “themselves,” still places where real people live and work and hang out in the town center and the language is still theirs and they are holding on to their souls and THEN they invite the tourists to come and share the place with them. Vilnius falls into this category, or at least it did when I visited in 2015, and now I’ve decided to Go East and see how Poland is managing this conundrum.

I bumped into the idea of going to Bydgoszcz (pronounced, as far as I can hear and tell as “BID-de-goshcht) by reading a teachers’ forum on eslcafe.com, a great place to hear folks talk about places small and large, known and remote around the world. Bydgoszcz came up as a place where someone could accept a nine-month contract and not go quietly insane in a matter of weeks from teaching in an isolated little burg. I did a quick Wiki check and learned that it had a university and a Philharmonic, that it had recently overhauled its small museum complex, and that it had a rich and diverse architectural heritage. That, and the train and hotel being cheap, was basically all it took, and away I went.

Once off the train, I made my way to my crib for the weekend, a lovely Belle Epoque structure near the center of town originally built in 1887. The new owners have tenderly restored the property in just a slightly over-the-top style, but my room was cozy, the restaurant delicious and under-priced, and the staff welcoming and more than helpful:

Because of its location in the Kuyavian-Pomeranian Voivodeship, Bydgoszcz has a complicated history. Kuyavia is a historic area in Poland with a history dating back millenia and including a famous history of cheese. Pomerania is the area to the north of Kuyavia and includes Gdansk and Szczecin, about which I wrote in December. I only knew it as a place that named a dog, but I have subsequently learned that both areas have gone back and forth, back and forth, between Poland (when it was functioning) and Prussia/Germany (when it wasn’t), resulting in a marvelous Slavic/Germanic mix that permeates a number of places in the region. The “hero” of Bydgoszcz is Kasimir the Great who granted Bydgoszcz civic rights in 1346 and set it on the road to whatever fame and fortune it has been able to achieve:

The next significant events in Bydgoszcz were “the Swedish deluges” in the 1620s and 1650s when the city was basically blown to bits by the retreating Swedes during the Polish-Swedish Wars (marble columns were recently found in the river during a drought-ish summer) and then the devastating effects of the plague. (Enough to keep everyone home with Netflix and MREs, IMHO.) But Bydgoszcz picked itself up and moved on.  A century or so later it was acquired by Prussia and renamed “Bromberg.” The pragmatic Prussians, understanding Bydgoszcz’s strategic location in terms of transportation of goods through the region, initiated a series of canals connecting the rivers surrounding the city and making it an immediate hub for commerce. Here’s a shot of the medieval city in bronze:

The main section of the “new” city extends north from the island seen above – the castle to the right was destroyed by the Swedes and has basically stayed destroyed ever since.

So under Prussian “inspiration,” Bydgoszcz became a forward way-station for the development and transport of goods and services through the region, known particularly for its granaries, one of which is in the process of becoming a whole exhibit itself on the history of water and waterworks in the region. Trying to get into the aquatic spirit of it all, I was completely charmed by a local fisherman and his avian assistant. (The quality of the photo is a bit grainy because I took it at a distance and had to enlarge:) 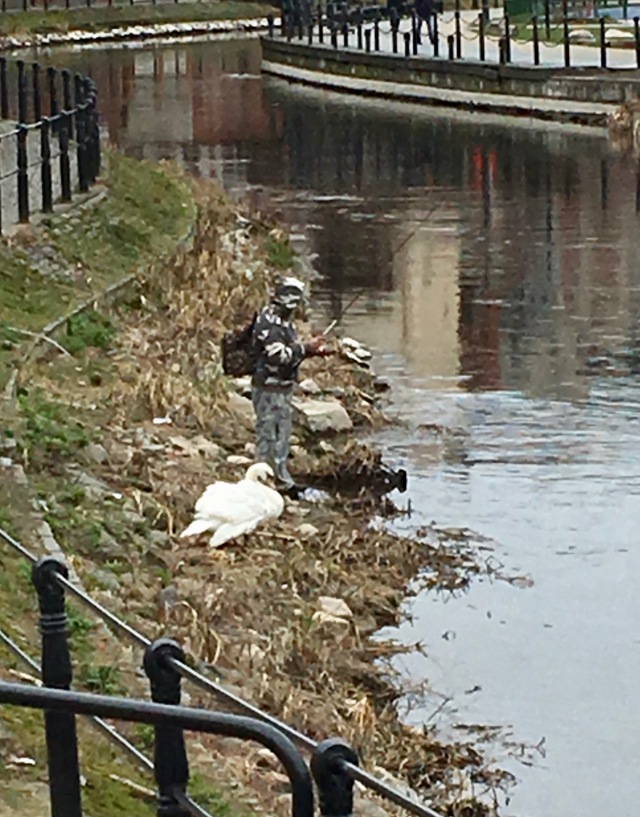 But what completely won my heart was the set of amazing small museums that Bydgoszcz has developed recently – a stunning set of historical “gems” that help visitors understand this city’s history and contributions to the region. In the small but incredibly well developed archeological museum on Mill Island, one can learn about centuries of history here, including the fascinating (for me) fact that during the early middle ages, people hung bones just inside the door to ensure the inhabitants’ well-being. Here’s a typical home of the time and place:

Nearby is a coin museum (I didn’t have time to visit) and a beautiful house filled with art in commemoration of the artist Leon Wyczolkowski. Now, I didn’t know this guy from Adam, but *wow,* is he great. Google him. Just do it. Here’s an arty portrayal from one of the rooms of the exhibition:

And nearby here was one of the most wonderful modern art museums I have ever seen (oh, and did I mention these places all cost about 1.00 USD each, less if you are old like me?) I would say the downside of this particular place was that….in an incredibly uncomfortably remnant of the old Commie times, a bored old man accompanies you through the museum, unlocking doors, turning lights on and off, and basically making you feel like a nuisance and sending the message that you better be quick about it. Amid a number of masterpieces I have never seen before (but thankfully I bought the book), I saw this tribute to our own Martin Luther King. Wasn’t expecting that: 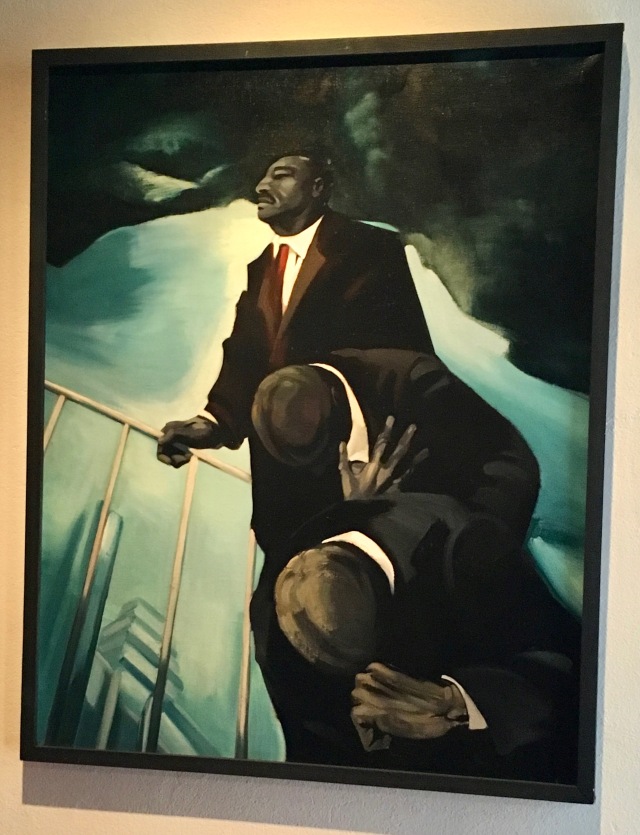 I’m sorry that since I wasn’t supposed to take pictures I didn’t manage to capture the artist. But it was lovely to see MLK here, and fascinating to learn that he had inspired someone in the neighborhood.

And finally, in the spirit of museum trolling, I discovered….the Museum of Dirt and Soap! Now this venue truly captured my heart because my great-grandfather, a German immigrant to Milwaukee from Ulm, Germany, was a soap manufacturer of some note. It’s a dirty job, soap, actually, lye and ash in the old days, and this little museum offered a rather amazing hour tour to educate visitors on the whole problem of dirt and its removal throughout much of recorded history. They start you off, cleverly enough, with a quick hands-on soap-making lesson, the product of which is proudly presented to you on your departure from the premises. Here are my two fellow tourees engaged in the process: 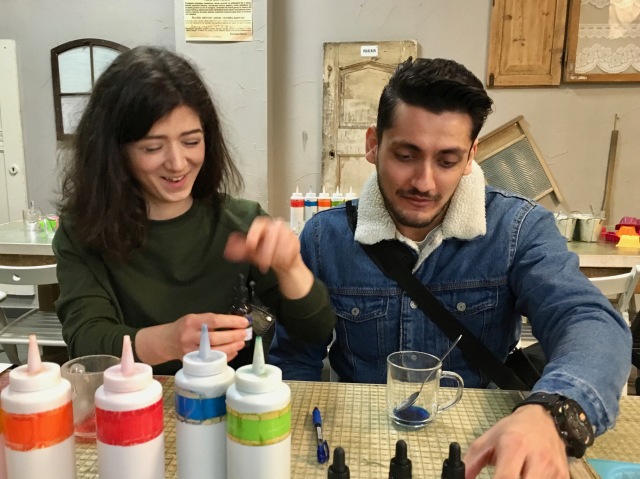 A little further on, the same brave lass volunteered to demonstrate washing techniques under the watchful eye of our enthusiastic guide:

As I headed to the train station for my ride back, I walked through the in-process re-furbishing of the town square and over the recently renovated pedestrian bridge, connecting the old town center with the rest of the city. Holding his own across the waterway was this intriguing acrobat:

…and across the bridge from the water walker, was an exhibit reminding one and all of where Bydgoszcz stood in the fight for Polish independence: 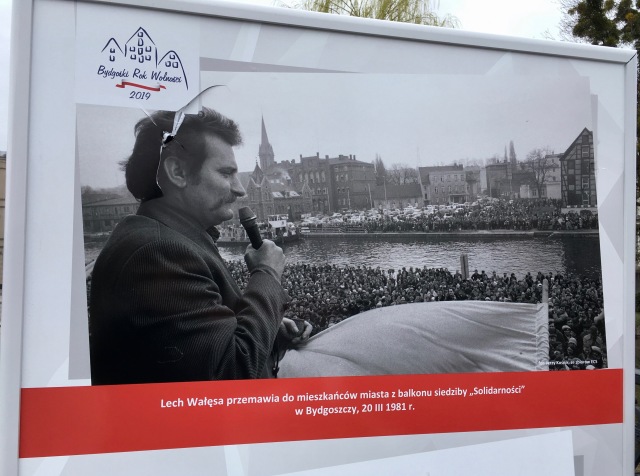 An inspiring shot of Lech Walesa speaking to what looks like the entire population of the city, and now a photo from 1981 that continues to inform the city and its visitors.

I dipped into the Basilica on my last stop – I was fascinated to learn it was built on the model of the Pantheon in Rome, that complicated and compelling homage to Roman pagan civilization and later the power of the Christian Church. But what I found most endearing of all is that the Basilica, in an effort to give everyone something to take away, offered a “fortune cookie” bowl of scripture lessons to visitors young and old:

Of course I took one! My scripture fortune was Ephesians 5:19, which reads, more or less, in the King James version:

“Speaking to yourselves in psalms and hymns and spiritual songs, singing and making melody in your heart to the Lord.”

And I’ll take that to the good. Time to join a choir, me thinks.

So ends my most recent trip to Poland; stay tuned for Katowice, coming up soon.

This entry was posted in Poland, Uncategorized and tagged Bydgoszcz. Bookmark the permalink.