A slice of Schwerin

I was fortunate that my good friend K recently invited M and me to go visit our friend U in Schwerin, giving us a chance to see the famous castle there and take a turn around the historic small town. It was May Day, a public holiday in Germany and most of Europe, celebrating the return of spring (tick-tock, still waiting!) and workers’ rights. It struck us as not a bit ironic to be walking through the former home of royalty on the day that celebrated the common man and woman, but what the heck, history is nothing if not ironic. In addition, Schwerin had the benefit of being a town we didn’t know well as well as the capital of the state of Mecklenburg-Vorpommern which runs runs along the Baltic Sea in the northeastern corner of the country – Angela Merkel territory.

That being said, Schwerin is most known for its castle, sometimes called the “Neuschwanstein of the North.” Located on a lake and looking from the outside like something you might find in a Tim Burton film, the castle dates back in its earliest incarnation to roughly the 10th century, although it assumed the beginnings of its current Dutch Renaissance form in the 17th century. Here we are preparing to enter and start our exploration: 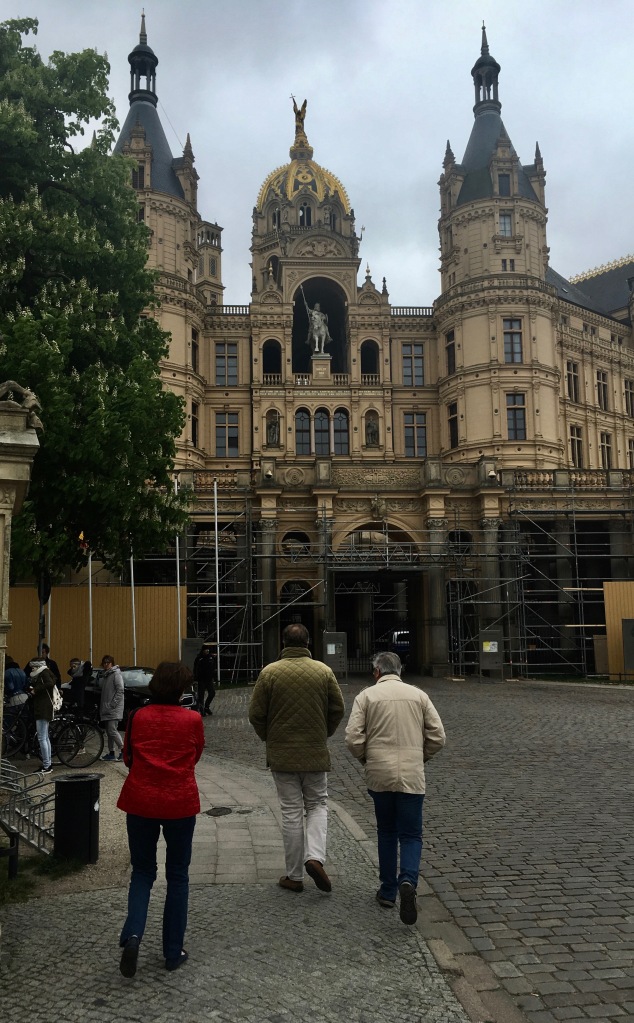 Searching for history, as well as a bit of central heating.

For most of German history, of course, Germany wasn’t even a country. Rather, it was a confederation of nearly 40 sovereign states, the leaders of which were at each other’s throats a good deal of the time. As a result, the country is chock-a-block full of castles that, unlike my childhood fantasies of princesses and happily ever after, served as strongholds to defend and protect a range of very competing interests. The Dukes of Mecklenburg were particularly unsuccessful during a good deal of their history (you haven’t heard much of them, have you now?), and as a result this castle seems to express its inferiority complex in the way some people sport expensive watches and fast cars. Here, for example, is the throne room:

Behind me as I took this shot turned out to be one of the first examples of indoor heating in a building of this type (located in the throne room, naturally, to keep a chill off the Royal Bum). Behold the first imperial radiator: 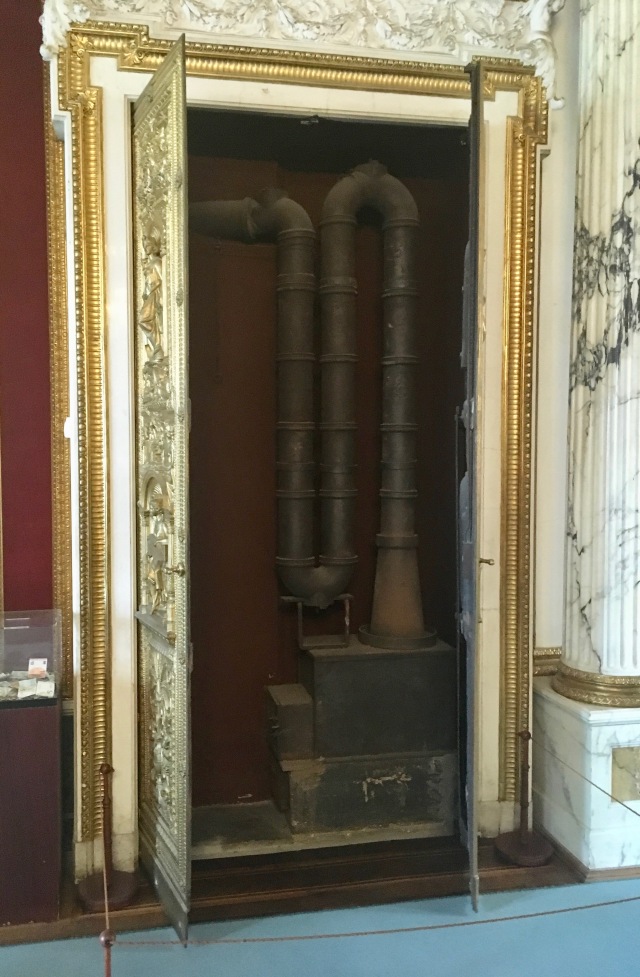 I won’t bore you with too many of the features of the building itself (except to say that it is definitely worth a look if you are there – some amazing craftsmanship, beautiful porcelain, and a great gun collection), but I will share the most interesting living art I saw that day. Speaking of Tim Burton, this fellow visitor looks ready for Halloween and wouldn’t go amiss in Seattle or Berlin. Nothing wrong this his parenting skills, though – he had two smalls under excellent and loving control.

Here’s a external shot of the building, complete with a view into a lower-level garden and restaurant. IMHO, the decorative effects are a bit overwhelming:

In addition to its function as a nearly-restored historic castle, this edifice has a modern life as the seat of the state assembly (Landstag). That end of the building has been massively restored to contemporary standards and houses a state-of-the art assembly forum and assorted support offices. Here’s an arty shot of the staircase:

And located near the formal meeting rooms, I was charmed by the inside smoking accommodation, complete with air filtration, thoughtfully provided for those hard-working public servants who have not been able to overcome their addiction to the Evil Weed:

Hanging not far away one spots a huge mural with a cautionary theme as to the results of not playing so nicely on the world stage. No wonder the parliamentarians are still smoking.

Once we had completed our walk through the castle, we wandered into the center for a stroll and little nosh. En route we passed this remnant of the old town, a building which really does challenge one to pick it up and put it in your pocket. (The man in the lower left must either be geocaching or maybe just really likes manhole covers.)

U, who comes from Schwerin, took us to a charming bistro on the edge of the lake for lunch. After a great meal and once outside the restaurant, I spotted this lovely little statue evidencing sibling concern. You have to look closely to get the idea, but ‘it’s actually raining under the umbrella.’ The darker damper circle surrounding the children’s feet gives you a clue:

Finally, since it was May Day, we couldn’t leave town without passing by the small demonstration taking place in the Platz by the cathedral (I’ll spare you, but it’s the biggest and oldest building in town, dating from 1160). The red signs represent the trade unionists who, like most of the parties at the moment (as far as I can tell) support a strong Europe with democratic principles. How you do this, exactly, is currently subject to a lot of discussion and disagreement, no surprise.

On our way back to Berlin, K, M, and I decided to follow the “road not taken,” forgoing the Autobahn and speeds which make me dizzy in favor of wending our way through some of the dozens of little hamlets dotting the northern German landscape. (I learned K hasn’t met a church steeple he doesn’t want to know better.) It was a beautiful early spring day and we feasted our eyes on the golden fields of canola and bright green ones of budding crops. Yet again I want to express my gratitude for this chapter of my life and for the wonderful people I get to share it with. Stay tuned for the next adventure.

This entry was posted in Germany, Uncategorized and tagged Schwerin. Bookmark the permalink.

4 Responses to A slice of Schwerin