Spoiler alert…this is not a post that will be rife with nude pictures. If that’s your interest, move along now, no reason to tarry.

To say I grew up in a prim and proper family with few PDAs (public displays of emotion) would be an understatement. The most erotic memory I have is that on the rare occasion that brother N and I shared a bed as youngsters (usually visiting relatives), we used to write large letters on each other’s back, spelling out a word the other would have to guess. PDAs were in such short supply, as I recall, that N and I made a conscious effort to give hugs to our younger step-siblings, since we saw that oversight on the part of our parents as a concerning thing. Not surprisingly, I was a bit late to the carnal delights that seemed to have defined my generation. One paramour in my later decades suggested that since I missed out on rampant widespread experimentation during my 20s, that area of my life was most probably a Lost Cause. Youth is wasted on the young, and all that.

So it might come as some small surprise to you, gentle reader, that in these later decades I have been indulging in one of the most un-American of physical pastimes, that of bathing naked with strangers. My first foray into this Brave New World was when I visited Budapest for the first time in 1992, barely three years into the non-Communist regime. At that point, I with several other women from my Untours group visited the Gellert Baths, an astonishing Art Noveau complex of pools and thermal waters that adjoins the Hotel Gellert on the Buda side of the Danube: 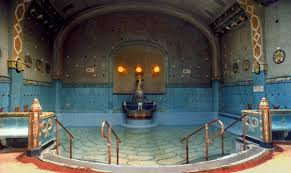 Men and women had separate entrances and facilities, carefully monitored by stern 4′ x 4′ Hungarian matrons who accepted forints, handed out threadbare towels, and shouted unintelligible instructions to us frightened tourist patrons. Once reaching the pools, however, I remember floating about in warm slightly sulfurous waters, gazing at the gorgeous architecture and tiling, feeling like a veritable goddess (I was 38) in comparison to most of the elderly patrons who clearly had had a very tough time under the former regime. (Body image +10 for that day, at least, and grateful for all the calcium and protein in my diet.)

It was over 20 years, however, before I repeated anything like that experience, my prim reticence taking hold as soon as I returned to the U.S. In 2015, however, I began teaching at the International University of Japan, a wonderful experience I have written about elsewhere. At the end of each term, the female faculty gathers for what is called a “Bare Naked Ladies Party,” an evening where folks sneak away from campus and enjoy a few guilty hours together in the warm sulfurous waters of a local onsen, bobbing and steaming and gossiping about fellow faculty and our irascible students: 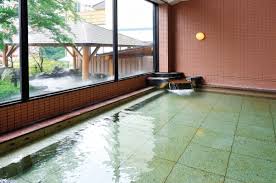 Onsens have a long and storied history in Japan. Wiki tells us that “an onsen  (温泉) is a Japanese hot spring; the term also extends to cover the bathing facilities and traditional inns frequently situated around a hot spring. As a volcanically active country, Japan has thousands of onsens scattered throughout all of its major islands.” IUJ is situated in a valley between ranges of the “Japanese Alps,” so it is chock-a-block full of great little inns and establishments that will, for a modest price, give you access to washing facilities, a selection of indoor and outdoor pools, and usually a nice little lounge to recover in, to say nothing of the ubiquitous vending machines with juices of all varieties. My particular favorite is “SWEAT.”) Of particular note for this region is that apparently the local snow monkeys (Japanese macques) are known to head down from the mountains in the dead of winter to frequent the onsens, much to the consternation of the usual patrons…common wisdom being that if you encounter one of those creatures, it is generally best to back slowly away, making no eye contact whatsoever. (This I have yet to see and almost sells me on the idea of a winter trip): 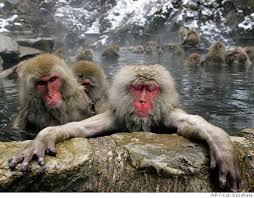 So so far, if you’re keeping track, we have one day in Budapest in 1992 and a couple of female faculty frolics in the 20-teens. What’s the big deal, you ask. Well, I have arrived in Germany and discovered, apparently, the Mother Lode of therapeutic nudity.

Berlin (and perhaps other cities in Germany, definitely true in Iceland and perhaps other Northern European countries) have loads of public and private swimming and bathing establishments, dating, no doubt, from the days with much of the housing stock didn’t have such accommodations. Since apartments have modernized, now a number of these places have updated and are definitely more luxurious, featuring a variety of pools, humid and dry saunas, hot tubs, relaxation rooms, restaurants, on-site massages and other sybarite pleasures. My first experience was a couple years ago when Kurt’s friend G invited me along to her favorite sauna spot in Spandau, and I spent four hours enjoying the heat *but trying like hell to get over the shock of walking around in my all-under with men and women together.* Yes, you read that right. These facilities are mixed gender and “textile free.” Yee haw.

In fact, I just spent this afternoon at one of Berlin’s newer additions to this genre, the Vabali Spa, one of a chain of such Bali-styled venues in Germany. Basically a 20,000 square meter “sauna village” about 15 minutes by foot from the Berlin Hauptbahnhof, Vabali is a garden of earthly delights for the uninhibited, among which I guess I must now count myself. One can go for two hours, four hours, or all day to enjoy the variety of pools and saunas, OR one can add a massage to the package, which is what I did today. I justified today’s significant outlay to my “mental health and sanity” budget since I barely slept last night in light of the latest mental abuses of the U.S. political scene, but I can’t make a habit of this or I’ll be living out of a grocery cart under a u-Bahn station:

The point I want to make about all of this, though, is that…..being naked with strangers (even boys and girls together) is strangely liberating and not as incredible awkward and weird as I initially thought it would be. I’m helped by the fact that most of the time in these venues *my glasses are off,* which means everyone is basically is a pinkish or brownish blob, and I pretend they see me the very same way (which, judging by the numbers of glasses around the place, they probably do). One cultivates one’s best “mid-distance” unfocused stare and just makes sure one doesn’t slip on the tiles or misplace one’s locker bracelet. But as I sat in one of the dry saunas this afternoon, feeling some my of muscles unclench again after a pummeling by a very adroit Thai masseur (yes, masseur, I even did that today), it occurred to me that this is yet another one of the things a lot of us are really inhibited by and quite frankly it’s a shame. Sometimes the less you have, the freer you are, and I’m beginning to understand that quite literally.

This entry was posted in Germany and tagged Spas. Bookmark the permalink.

2 Responses to Naked with strangers