A wedding in Hamburg

I’ve just returned from a lovely family weekend in the outskirts of Hamburg, and since it was both charming AND a bit of a departure from any other wedding I’ve ever been to, I decided to share it with you.

The bride is T’s wonderful niece J, one of the three people who was actually in attendance at our wedding, the photographer of some of the pictures in my blog of that day. She was marrying her prince T and it was an honor to be a part of it all. The event also served as one of my “pop German quizzes,” in which I attempt valiantly to appear much more fluent in German than I actually am with a group of complete strangers to which I am currently legally related, an activity which normally results in my falling into a near-coma-type sleep at the end of the day.

But let me share parts of the fun and festivities which need no translation. The actual ceremony itself, a non-religious one, took place yesterday morning in a registry office. But not just any registry office. We all headed out far west of Hamburg into the countryside to the tiny village of Jork. Now a charming and bucolic retreat known for its cherry and apple orchards (but long a political victim of its strategic location), Jork lay under the crowns of the Holy Roman Empire, the Swedes, the French, and finally the Germans, respectively for the last thousand years or so. Here’s a shot of the registry office (as well as the happy couple), and you’ll get a small sense of the place and why it was chosen. The architecture is courtesy of the Dutch, I’m told.

Fridays are a busy days in the registry office; there were three different groups milling anxiously around that morning and we almost joined the wrong bunch. Fortunately we found our tribe and quickly filed upstairs where we were privileged to witness a very short, totally secular, but completely heartfelt ceremony of bonding, somewhat similar to ours in Denmark two years ago. (The two elegantly coifed heads in the foreground are the groom‘s parents.)

After the ceremony, we tumbled back down the twisty stairs and out the doors for a bit of refreshment:

But the day was a bit brisk for outside socializing, so we soon all trooped to the hotel where the rest of the day’s activities would be. The Privathotel Lindtner is owned by the same folks that bring you the Lindtner chocolates and candies, as one is emphatically reminded at check-in:

Since no wedding is complete with photographs, we started our afternoon by assembling on the front steps of the hotel for the obligatory group shot. But this one came with a twist. In order to make sure everyone’s smile was included in the shot, the photographer employed a special assistant….which means I was photographed by a drone for the first time (that I’m aware of). Cool idea, but also a little creepy:

Thankfully the formalities were concluded quickly and we could get to the main event, which consisted of substantial quantities of  excellent food and bev. Here are the lovebirds before the first meal was served: 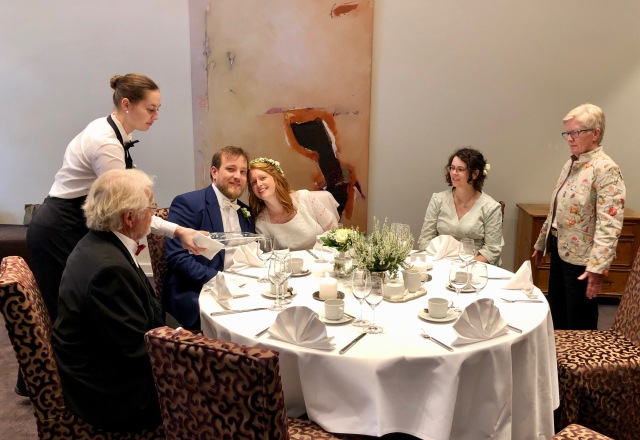 …and another shot of them admiring the most amazing present of all, from J’s parents, a hand-carved representation of the island of Sylt, one of J’s happy places, together with all manner of adorable and thoughtful related giftlets attached to it:

Besides astonishingly creative presents from friends and family members, a scrapbook that was created by the guests in real time with photos taken outside, and a tile-painting table (!!), the wedding entertainment included an original song written and sung with great earnestness and amusement to the happy couple:

To my enormous relief, there was no garter-tossing or bouquet-scrambling – I guess those are American innovations. The traditions at this wedding seemed much more genuine and less….reductive. That doesn’t mean there wasn’t a lot of giggling and sniggering going around in response to some of the lyrics of the song…that my evolving German didn’t quite catch.

Thankfully, we finally made it to dinner. And what a meal it was.

In other words, cheese tart with salad, wedding soup (a beef broth with squares of egg white), braised oxen with truffled potato mousse, shallots in a port wine reduction and veggies, and then one of the most kickass dessert plates I’ve ever had in my life:

As I was chowing through this most delectable array, it crossed my mind that this meal would probably never be served at an American wedding, where the choice would probably be chicken or fish and would include no dairy or gluten. That would have eliminated most of this astonishingly delicious meal…and in that moment I was more than happy to ignore dietary correctness in favor of sheer gluttony at the highest level.

Best wishes, J&T! It was a grand treat to share your special day. Enjoy Majorca and see you at Christmas…

This entry was posted in Germany, Uncategorized and tagged Wedding. Bookmark the permalink.

2 Responses to A wedding in Hamburg