I’ve been pretty Scrooge-like for most of my adult life, shunning Christmas celebrations and festivities with a vengeance, due in large part to a combination of odd family dynamics and disillusionment about Christianity in general and its gross commercialization in particular. But here’s one of those instances where changing geography can change perspective. On my very first visit to Berlin five years ago, good friend K introduced me to the Christmas market at the Schloss Charlottenburg, one of the most scenic and notable of Berlin’s 60+ Christmas markets, and a groupie was born.

Christmas markets, or more properly, Weihnachtsmärkte, are said to be a German creation, starting in Dresden in the 15th century (although there were December markets before then). Now mostly a purview of Germanic countries, they are spreading their tendrils around Europe; I’ve seen them in Vilnius as well as Marseille. Why this hasn’t caught on in a big way in the U.S. is beyond, me, but as they say, “More for us.” A better question might be why has a confirmed Scrooge such as myself…tumbled so hard for these mass-produced over-subscribed commercial events? Simply because….it’s everything I like about Christmas (lights, greenery, music, food, fun, basically the Nordic pagan stuff) and nothing I don’t like (religion, modern kitsch like snowmen, tinsel on palm trees, and bad muzak). Okay, well, there is some bad muzak, but I’m in a forgiving mood. Did you know Bing Cosby rules the European airwaves in December?

As I mentioned, Berlin has a lot of markets, and while I’d like to visit them all, that’s simply not practical. This year I am focusing on the smaller ones, those that are only open one weekend during the month, and often that are sited in interesting places. So far this season, I have visited two design markets (entrance fees, beautiful stuff but really expensive) and seven “street” markets around town, including one at the King’s hunting lodge and another in the courtyard of a local psychiatric hospital. (You won’t be surprised to learn I’ve got at least four or five more in my sights for this coming weekend.) But instead of dragging you through all of them in a dogmatically systematic fashion, I thought I might do just a little compilation to share highlights from the places I have seen so far. 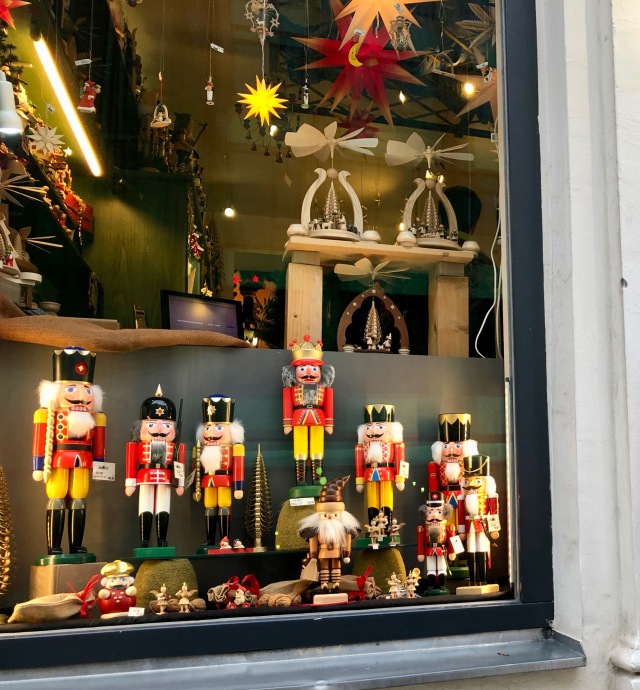 These nutcrackers welcomed me to a lovely little market on Sophienstrasse – on the edge of the Hackescher Markt section of town and one of the few streets unscathed from World War II – hosting a small but very cozy market abutting the one at St. Hedwig’s, the psych hospital. It wasn’t super crowded that afternoon and the stalls featured interesting people selling interesting things. (Spoiler alert: T’s big gift came from this market) Here’s a vendor tenderly sharing his offerings with a seemingly motivated customer:

Because T is a craftsman of some note and we spend a good deal of our time at pen shows with people who appreciate well-made artisan items, I have become more aware of and sensitive to this whole world of usable art. Berlin, not surprisingly, punches above its weight in this regard, and I enjoyed touring two venues with amazing offerings from talented locals. Here at the Weihnachts Rodeo (love the name!), a vendor offered samples of their honey wine. Let me tell you I got pretty soused that particular afternoon; I had no idea there were so many delicious local gins… 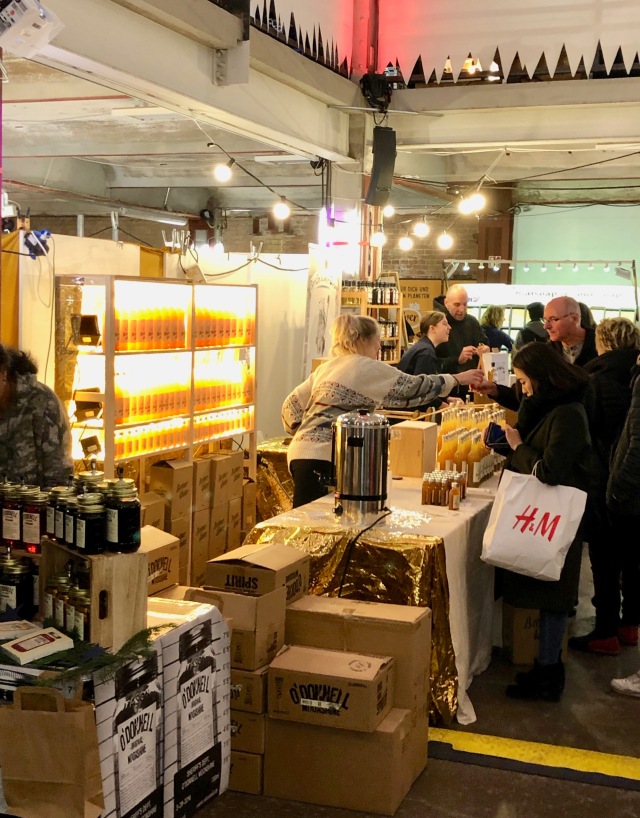 Another design fest, this one in the courtyard of the German history museum, featured beautiful items in a beautiful space. Although I didn’t buy the purple hat on the far left, I certainly should have. You might just catch the photographer in the far right.

Rain or shine, the markets are open during the Advent weekends and people come out in droves to enjoy them. There are a few that seem particularly user-friendly for children, and while I normally avoid small people like the plague, I become a bit more tolerant at the holidays since, I am coming to understand, the holidays allow us all to be kids again. Plus, who can resist four Santas playing the french horn? 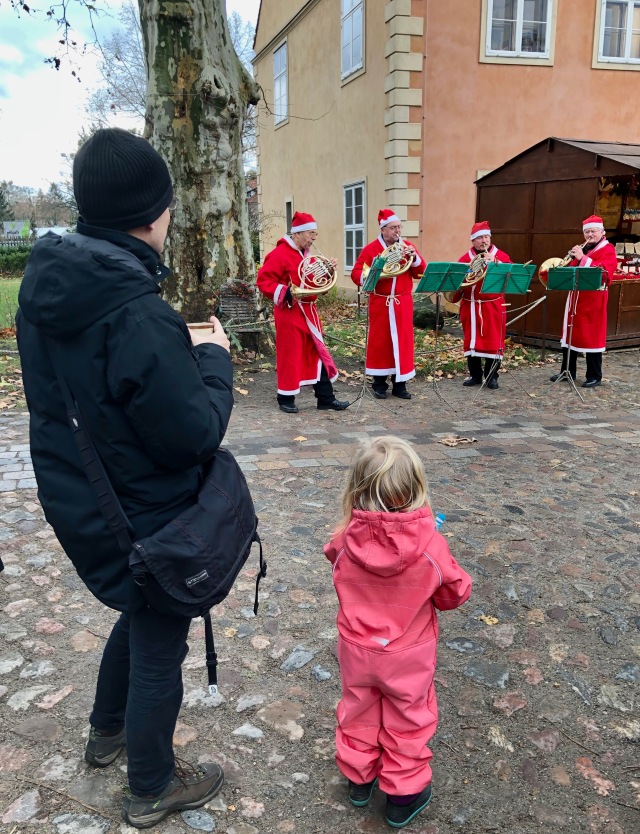 Another market which advertises itself as a Nordic fair manages to sync wildly different historical eras without a moment of hesitation:

One of the enduring traditions of the markets, of course, are the comestibles. On the “must eat” list for any German establishment are two classics, Gluhwein and Thuringer Bratwurst. While these are normally not a big part of my diet, of course “When in Rome…”

One interesting tradition with the Gluhwein is the “Pfand,” or deposit, one must make for the cup or glass one is drinking the Gluhwein out of. Clearly in the past there must have been a BIG problem with holiday merrymakers simply “forgetting” to return the containers, so now one pays a deposit anywhere between one and four Euros at the time of purchase. The market at Charlottenburg, never one to miss a merchandising opportunity, makes special yearly dated mugs for the smitten tourists to bring home in their luggage. At the less commercially savvy local markets, glass or ceramic mugs just require that you bring them back…or you forfeit your Euro. Happily at one market this past weekend, there were two charming lads already decked out in holiday swag to help you with this little chore: 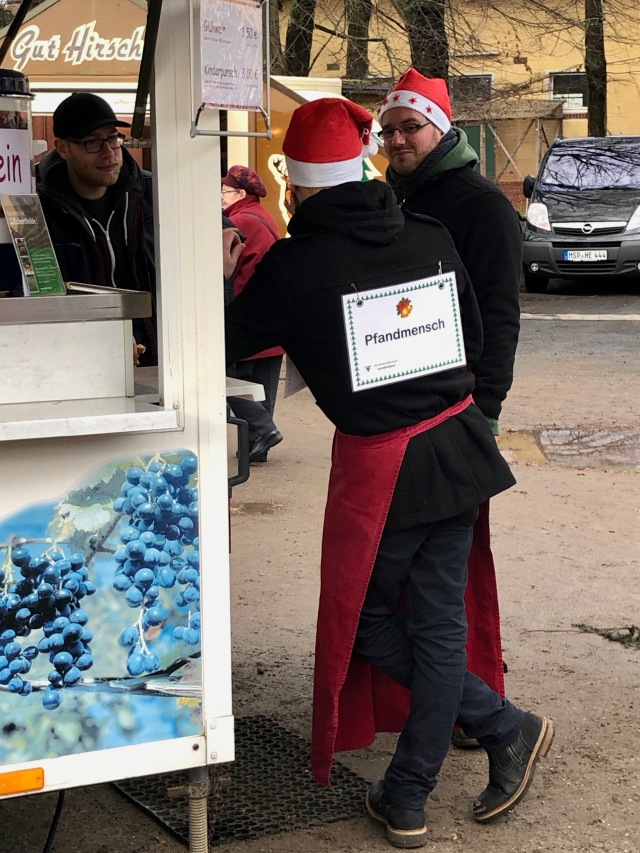 So on that note, I will leave you with a last look at the Schloss Charlottenburg, some charming stranger enjoying Gluhwein, and my very best wishes for a happy holiday season, wherever you are and however you choose to spend it.

This entry was posted in Berlin, Germany and tagged Christmas markets. Bookmark the permalink.

2 Responses to Binge-walking the Christmas Markets